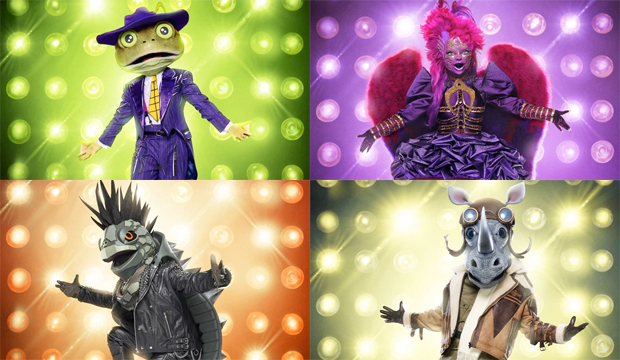 One contestant will be eliminated the end of Wednesday’s semi-finals round of “The Masked Singer,” leaving only three still in the running to win the Golden Mask. According to Gold Derby’s predictions, the Final 3 will be the Night Angel, the Frog and the Turtle. That means, sadly, the Rhino will be eliminated in fourth place and forced to remove his horned mask in front of America. Do you agree or disagree with our readers’ odds? Go ahead and make your predictions before the Wednesday, May 13 episode.

Last we saw the horned mammal in the quarter-finals, he was performing “You’ve Lost That Lovin’ Feelin'” by The Righteous Brothers. The panel of judges were notably confused about his true identity, throwing out such names as Jason Aldean, Trace Adkins and David James Elliott. Former guesses have included Barry Zito, Charles Kelley, Jeff Bridges, David Hasselhoff, Jason Adlean and Tim McGraw.

Rhino made his big debut on the reality TV competition in Group C, alongside the likes of Bear (Sarah Palin), Swan (Bella Thorne), T-Rex (JoJo Siwa) and Astronaut (Hunter Hayes). In his first appearance, Rhino took on “Have a Little Faith in Me” by John Hiatt and earned high praise from the panelists. He then returned to perform “Nice to Meet Ya” by Niall Horan in the playoffs, “Tracks of My Tears” by Smokey Robinson & The Miracles in the championships, “What a Man Gotta Do” by Jonas Brothers in the Super 9, “10,000 Hours” by Dan + Shay & Justin Bieber  in the face-offs and “Die a Happy Man” in the Battle of the Sixes.

If Rhino is eliminated in fourth place, that will leave Night Angel, Frog and Turtle as the final three contestants of Season 3. As of this writing our users think Night Angel will win, but there is still plenty of time for one of the slimy green animals to prove victorious on finale night, May 20.

Here are the current winner odds for “The Masked Singer” Season 3, based on the predictions of our readers: