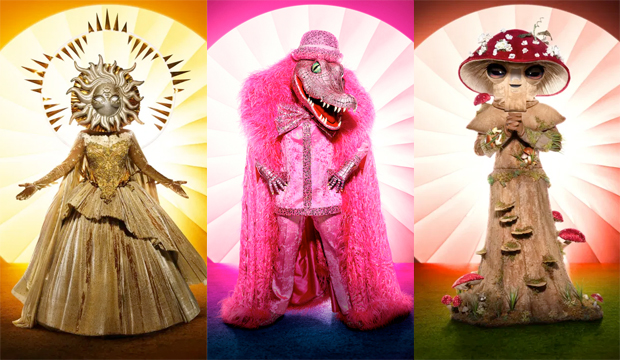 And then there were three. At the end of Wednesday’s semi-finals episode of “The Masked Singer,” the Super Six contestants were narrowed down to only Sun, Crocodile and Mushroom. These Final 3 costumed celebrities will next be seen in the December 16 finale, where they’ll face off one last time for the Golden Mask trophy. (Next week’s December 9 episode is a holiday sing-a-long special.) Who do you think most deserves to win Season 4? Vote in our poll below and then defend your choice in the comments section.

The four panelists (Nicole Scherzinger, Ken Jeong, Jenny McCarthy and Robin Thicke) are still stumped on which secret celebs are hiding inside the extravagant costumes. We’ve compiled all of their guesses so far (see below), as well as which songs the contestants sang in each of the first four rounds. Do YOU know the identities of Sun, Crocodile or Mushroom?

Whoever wins this Fall 2020 cycle will join the esteemed list of past winners: T-Pain (Monster), Wayne Brady (Fox) and Kandi Burruss (Night Angel). While there is no prize money, the champion does get to take home the coveted Golden Mask trophy. In addition, this year there’s a new Golden Ear trophy at stake for the judge with the most correct “first impression” guesses. So far Jenny is in the lead with three points.

Here’s a closer look at the mystery celebs who have advanced to the Final 3: