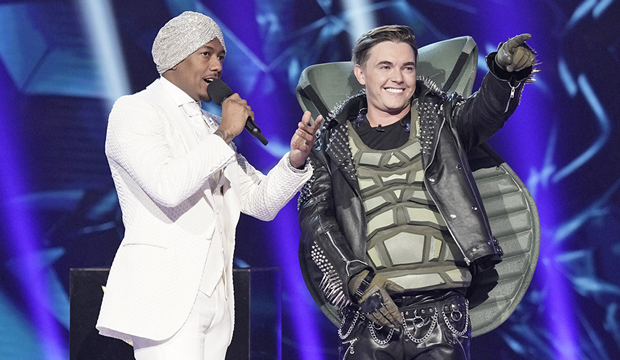 The audience of “The Masked Singer” may have had their say, but our Derbyites are determined to have their voices heard about what went down on the Season 3 finale. They voted in our poll and a surprising 57% of our readers say the coveted Golden Mask should have gone to pop star Jesse McCartney, who competed as the Turtle. That’s over 20 points more than those who thought Kandi Burruss (Night Angel) was rightfully crowned the winner, which totaled 35% of our respondents. Only 8% believed that the trophy should have gone to Bow Wow (Frog). Do you agree with our readers that McCartney was robbed? Be sure to let us know in the comments below.

SEE‘The Masked Singer’: Bow Wow says ‘it’s weird’ to not wear his Frog mask now that the show’s over [WATCH]

This is a big departure from the feelings that our readers had at the end of last season. An overwhelming 73% said that Wayne Brady (Fox) was rightfully named the champion of season two, with runner-up Chris Daughtry (R0ttweiler) getting 26% and third-place finisher, Adrienne Bailon, getting only 1%.

McCartney being a fan favorite shouldn’t come as any sort of surprise. After an acting career that included a three year stint on “All My Children” as JR Chandler (which netted him two Daytime Emmy nominations), he started performing with the boy band, Dream Street, though they disbanded shortly thereafter. He quickly re-established himself as a solo performer with his debut album, “Beautiful Soul,” being released in 2004. Since then McCartney has had a steady string of successful singles, including “Beautiful Soul” and “Leavin’,” the latter of which cracked the Billboard top 10 and was certified platinum. He chose to perform “Before You Go” by Lewis Capaldi for the finale.

Burruss, the second place finisher in our poll, has had an incredible career as well. She first came to prominence in the R&B group, Xscape, in the mid-1990s. Before pushing forward with a solo career, Burruss also helped write several songs including eventual mega-hits “Bills, Bills, Bills” by Destiny’s Child and “No Scrubs” by TLC. The latter of those two netted her a Grammy Award for Best R&B Song in 1999. Since 2009, Burruss has also been a regular presence in the world of reality television, beginning with her being cast on “The Real Housewives of Atlanta” and continuing with several spin-offs over the years. For the finale, Burruss wowed the studio audience with her rendition of “River Deep, Mountain High” by Tina Turner.

The third-place finisher, in both “The Masked Singer” and in our poll, was rapper, Bow Wow. Since he was first noticed by Snoop Dogg in the late ’90s, Bow Wow had a very successful recording career, including four albums that peaked in the top 10 of the Billboard 200. In recent years, he’s also branched out to focus on his acting career. As the Frog, he became known for his fantastic dance moves that brought audiences to their feet. For his final performance, he chose to go with “Bad Boy for Life” by Black Rob, Mark Curry and P. Diddy.