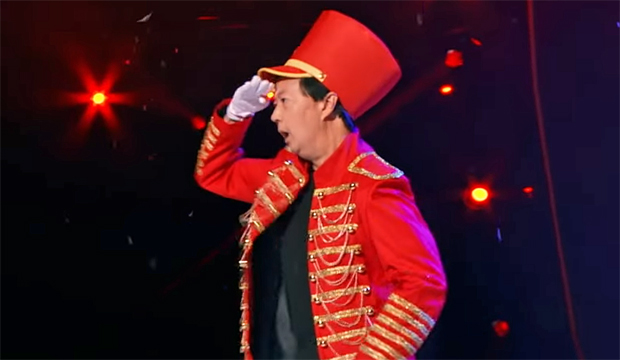 After last week’s triple unmasking, “The Masked Singer” took a break from the competition on Wednesday for its first-ever holiday sing-a-long. The hour-long special featured unmasked celebrity performances (including Tori Kelly), as well as appearances by the Final 3: Sun, Crocodile and Mushroom. Did any of the new animated clues tip off the panelists (Robin Thicke, Ken Jeong, Jenny McCarthy and Nicole Scherzinger) to their true identities? Of course, no one was eliminated tonight, but we’ll all find out who’s hiding behind the finalists’ masks on finale night, December 16.

Below, read our minute-by-minute “The Masked Singer” recap of Season 4, Episode 11, titled “The Holiday Sing-a-Long,” to find out what happened Wednesday, December 9 at 8:00 p.m. ET/PT. Then be sure to sound off in the comments section about your favorite costumed characters on Fox’s reality TV show, reflect on every reveal for all seasons, and tell us who you think will ultimately join the “Masked Singer” winners list.

8:10 p.m. — A jolly Saint Nick Cannon arrived to host us through this special sing-a-long, kicking things off with a brand new holiday song from The Sun. The finalist is singing the Brenda Lee classic, “Rockin’ Around the Christmas Tree,” and her true identity seems more clear than ever as I listen to this. Next, Tori Kelly aka the Seahorse stands before a plate of cookies to introduce her own performance of “My Heart Will Go On” by Celine Dion from earlier this season. She chose to include this song in the sing-a-long because it’s a beautiful classic and she is certain everyone knows all the words. Next, Crocodile belts out “Silent Night” to close out the first segment.

8:20 p.m. — Mushroom is performing “The Christmas Song” because it’s one of his favorites of all time, sung by a true legend, Nat King Cole. Once again his voice transforms to a sound unlike anything we’ve heard from him before. It was a classy, beautifully sung rendition. The holiday train keeps moving with Bob Saget introducing one of his favorite performances as the Squiggly Monster, “(I Can’t Get No) Satisfaction” by The Rolling Stones.  That’s followed up by Clint Black & Lisa Hartman Black wishing us a happy holiday while introducing their angelic performance of “The Prayer” by Andrea Bocelli and Celine Dion as the Snow Owls.

8:30 p.m. — After a cute little cartoon featuring all of the “Masked Singer” characters and Nick as Santa, we continue on with performances. Chloe Kim wishes everyone love from Switzerland and introduces one of her favorite performances as Jellyfish, “Don’t Stop Now” by Dua Lipa. Next, Dr. Elvis Francois hopes we all enjoy singing along to Serpent’s performance of “500 Miles” by the Proclaimers.

8:40 p.m. — Returning as herself and performing “Sleigh Ride” from her holiday album, “A Tori Kelly Christmas,” it’s, of course, Tori Kelly. She’s unmasked for this festive performance that we’re all singing along to. It’s a little hard to keep up! Next, Taylor Dayne introduces one of her favorite performances as Popcorn, Jessie J‘s “Domino.” That mixes right into Busta Rhymes aka Dragon spitting out “Mama Said Knock You Out” by LL Cool J.

8:50 p.m. — Nick is sharing his favorite performances from the three finalists, beginning with “Bleeding Love” by Crocodile. Fun fact, this Leona Lewis hit was written by the Turtle from Season 3, Jesse McCartney. Next is Mushroom’s performance of “This Woman’s Work” by Kate Bush/Maxwell. This is one of my absolute performances of the season. Last up is the Sun’s powerful debut performance, “Cuz I Love You” by Lizzo. Nick said another memorable moment was when actor Mickey Rourke unmasked himself as the Gremlin and joined him for a performance of “Stand By Me.”

8:59 p.m. — Ken Jeong takes the stage to sing a hilarious rendition of “Little Drummer Boy.” Honestly, he’s not the worst singer I’ve heard. He’s always fun to watch. Then the show closes with a rendition of “Jingle Bell Rock” featuring everyone from Season 4 except for Rhymes, Rourke and the three finalists. That’s a wrap for this holiday special! Next week Crocodile, Mushroom or the Sun will win the Golden Mask trophy and finally be unmasked. Do you know who they are?

Be sure to make your predictions to influence our reality TV racetrack odds. You can keep changing your predictions until just before the next episode airs on Fox. You’ll compete to win eternal bragging rights and a spot on our “The Masked Singer” Season 4 leaderboard. See our contest rules and sound off with other fans in our reality TV forum. Read more Gold Derby entertainment news.