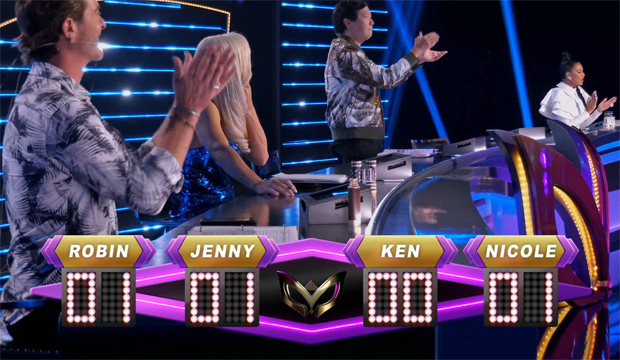 This season on “The Masked Singer” there’s a brand new trophy on the line, the Golden Ear, that will be awarded to the panelist with the most correct “first impression” guesses. The judges will each get a point if their initial instinct comes true, and whoever has the most points at the end of the competition will take home the coveted award. After three episodes there’s a three-way tie for first place, as Robin Thicke, Jenny McCarthy and Nicole Scherzinger all have one point apiece. Unsurprisingly, that means Ken Jeong is once again the worst guesser. Scroll down for the running tally.

In the Season 4 premiere, both Robin and Nicole correctly named rapper Busta Rhymes as Dragon after his performance of “Mama Said Knock You Out” by LL Cool J. Jenny was close as she thought it was fellow rapper DMX, but Ken couldn’t have been more wrong as he pegged Olympian swimmer Michael Phelps.

Jenny got her revenge in the second episode when she guessed actor Mickey Rourke as Gremlin following his cover of “Stand By Me” by Willie Nelson. Robin picked Jerry Lee Lewis and Ken named Stone Cold Steve Austin. Rourke ended up removing his mask voluntarily because he was too “hot” so Nicole didn’t have a chance to guess, but host Nick Cannon confirmed in the following episode that only Jenny’s first impression came true.

In the third episode, none of the panelists were able to narrow down Brian Austin Green as Giraffe. Robin went with Travis Barker, Jenny chose Seth Green, Ken thought it was Shia LaBeouf and Nicole named Dale Earnhardt Jr. Coming the closest was guest star Joel McHale, who picked Green’s “90210” co-star Jason Priestley.

The 13 remaining contestants for Season 4 are Baby Alien, Broccoli, Crocodile, Jellyfish, Lips, Mushroom, Popcorn, Seahorse, Serpent, Snow Owls, Squiggly Monster, Sun and Whatchamacallit. They’ve initially been split into three groups — A, B and C — with the finalists from each group ultimately making it to the final rounds.