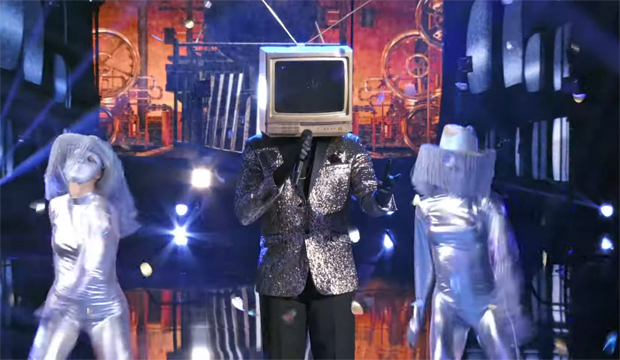 At the start of Wednesday’s all-new episode of “The Masked Singer,” host Nick Cannon will introduce a brand new costumed character named Mr. TV. Don’t worry — this isn’t a contestant who’s crashing the party midway through the competition. Instead, it’s the week’s special guest judge. In Fox’s preview trailer (watch below), Mr. TV comes out on stage wearing a sparkly silver suit and crooning Maroon 5‘s “Memories” in a familiar baritone voice. “Season 4 is full of surprises!” Jenny McCarthy shouts. However, the surprise is ruined later in the video clip (specifically the 14-second mark) when the mystery celeb is shown on the panel without his television mask. So who is he? Read on for the preview spoiler.

SEEWendy Williams (‘The Masked Singer’ Lips) unmasked interview: ‘I can’t sing, I can’t dance, but I know how to have fun!’

As you no doubt have already guessed by his trademark voice, Mr. TV is actually … Season 2 winner Wayne Brady!

This five-time Emmy winner, comedian and Broadway star took home the Golden Mask in the December 18, 2019 finale in his Fox costume. Robin Thicke and Nicole Scherzinger both knew Brady was the dapper mammal with a cape and top hat, while Jenny and Ken Jeong both picked Jamie Foxx as their final guess. The runner-up that season was Chris Daughtry as the Rottweiler.

As the Fox, Brady performed the following songs throughout the second season: “This Love” by Maroon 5, “Hey Look Ma, I Made It” by Panic! at the Disco, “Every Little Step” by Bobby Brown, “Tennessee Whiskey” by Chris Stapleton, “Blame It” by Jamie Foxx feat. T-Pain, “This Christmas” by Donny Hathaway and “Try a Little Tenderness” by Otis Redding.

A few weeks ago, Joel McHale became the first mystery guest judge of “The Masked Singer” Season 4 to come out on stage wearing a mask — specifically a Robin Thicke mask. “It looks too much like me, it’s weird!” Robin exclaimed at the time. The panelists quickly recognized McHale’s voice as he tried to sing “Blurred Lines” while unbuttoning his shirt in front of the virtual audience.