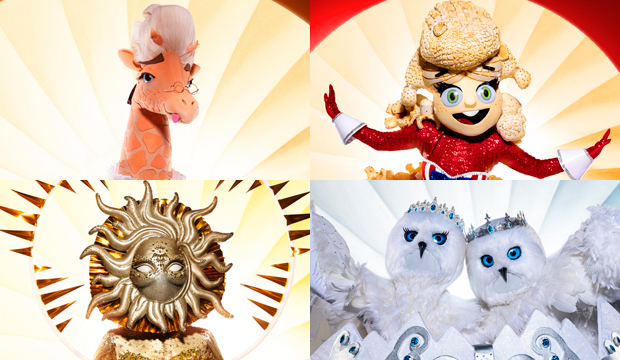 Wednesday’s third episode of “The Masked Singer” re-introduced viewers to Giraffe, Popcorn, Sun and Snow Owls. These Group A contestants took the stage for a second time after initially appearing in the September 23 season premiere. Each of these four characters performed their hearts out in front of a virtual audience and panelists Robin Thicke, Ken Jeong, Jenny McCarthy and Nicole Scherzinger, but who ended up receiving the lowest number of votes and revealing their true identity in front of America?

Below, read our minute-by-minute “The Masked Singer” recap of Season 4, Episode 3, titled “The Group A Play Offs – Famous Masked Words,” to find out what happened Wednesday, October 7 at 8:00 p.m. ET/PT. Then be sure to sound off in the comments section about your favorite costumed celebs on Fox’s reality TV show, reflect on every reveal for all seasons, and tell us who you think will ultimately join the “Masked Singer” winners list.

8:00 p.m. — “Previously on ‘The Masked Singer’!” In the second episode, Group B’s six contestants performed for the first time: Baby Alien, Crocodile, Gremlin, Seahorse, Serpent and Whatchamacallit. However, before the audience and panelists got the chance to vote, Gremlin had enough and voluntarily removed his mask to reveal actor Mickey Rourke. “I was in the neighborhood,” he told host Nick Cannon about why he decided to do the show. Um … okay! Who’ll be the next masked celeb to head home? Let’s find out!

8:15 p.m. — Up first tonight is Popcorn. She picked this costume because she wanted to step far out of her comfort zone, but her favorite part so far is flirting with Nick. We see Popcorn in a hospital bed and she reveals that when she was a tiny kernel she had a bizarre condition, couldn’t eat or sleep and had high anxiety. Her voice led her away from the drama and allowed her to survive. We also see a hair crimper and a Rubik’s cube. Tonight Popcorn is singing “Falling” by Harry Styles. Okay, I’m pretty sure I finally know who this is. Taylor Dayne! A couple weeks ago the voice was on the tip of my tongue, but I think I finally nailed it. As a final clue, a drone flies by holding a planet. Popcorn says the second rock from the sun should bring them closer to her. The panel thinks Popcorn could be Gloria Gaynor, Katy Perry or Vanessa Williams. I’m sticking with Taylor Dayne.

8:25 p.m. — Up next is the Giraffe. We learn that he survived and thrived by seeing the big picture (we see a picture of the Fox so maybe he knows Wayne Brady). There are clues he’s from Atlanta and he reveals he had a terrible thing happen that nearly destroyed his life. He could barely walk or talk. Tonight he’s singing “Get Down On It” by Kool & the Gang. He’s singing more tonight than he did a couple weeks ago. I initially thought he was a rapper, but now I’m very confused about his identity. He’s not a very good singer, but he can carry a tune. He’s a very interesting performer either, unfortunately. His clue was a domino with two fours. The panel thinks Giraffe could be Travis Barker, Scott Wolf or Shia LaBeouf.

8:40 p.m. — The Snow Owls are up next. They say they’ve always had each others’ backs, like when the male owl was going through a breakup and got swept up in emotions. She took his side, despite backlash from their community. Then, the female says when she was in low places, he was her night in shining armor. We also see a basketball with DAL on it. Tonight they’re singing “Like I’m Gonna Lose You” by Meghan Trainor and John Legend. This performance isn’t nearly as good as their last, but it’s still good. She sounds like Shania Twain. The clue drone flies by with a witch hat. The panel thinks the Snow Owls are Rob Schneider & Elle King, Will Ferrell & Rachel McAdams, Garth Brooks & Trisha Yearwood or Keith Urban & Nicole Kidman.

8:50 p.m. — Last to sing tonight is the Sun. She feels like a kid again and reveals she missed out on a lot of her childhood growing up in a fractured home. Lately she’s made up for lost time. She mentions going into the woods and we see her mixing a potion. We see her burning ugly rumors out in the trees. Tonight she’s singing “Praying” by Kesha. She’s got a powerful voice and it sounds familiar but I can’t quite place it. Nicole called it her favorite female vocal she’s ever heard on the show. That’s an overstatement. It was good but it wasn’t the best ever. Her drone clue was an 8 ball. The panel thinks the Sun could be Katharine McPhee, Carrie Underwood or Mandy Moore.

8:59 p.m. — It’s time for one of these four masked creatures to unmask! The singer with the lowest number of votes is the Giraffe. Before he unmasks, we get to see the panel’s first impression and final guesses: Will.I.Am/Shia LaBeouf(Ken), Dale Earnhargt Jr. (Nicole), Travis Barker/Seth Green (Jenny), Jaleel White/Travis Barker (Robin). Guest judge Joel McHale guesses Giraffe is Jason Priestley. The Giraffe finally pulls off that long neck to reveal Brian Austin Green! Nobody saw this coming, especially Robin who was best friends with Brian when they were kids. That’s a wrap for tonight! Popcorn, Snow Owls and the Sun have advanced to the Group A finals.