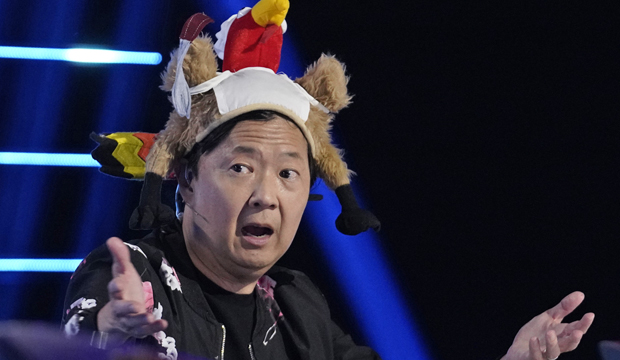 In a break from tradition, “The Masked Singer” will air a special turkey-themed episode this week on Thanksgiving Day, bypassing its normal Wednesday schedule. On the night of Thursday, November 26, gather the family and join panelists Nicole Scherzinger, Ken Jeong, Jenny McCarthy and Robin Thicke, plus guest judge Jay Pharoah, for the Group C finals. That’s when Broccoli, Jellyfish and Mushroom will give it their all on the stage, with two advancing to the Super Six; the third will be eliminated and forced to unmask in front of America.

“The Masked Singer” will still be airing an episode in its regular time slot on Wednesday, November 25 … but it’ll be a rerun. Fox will re-broadcast the Group B premiere that night, which is the episode when actor Mickey Rourke infamously unmasked himself because he was too “hot” inside his Gremlin suit.

As for Thursday’s Thanksgiving episode, which will feature Ken wearing a silly turkey hat, it’ll be fans’ last chance to see Group C before the survivors will be mixed in with the other members of the Super Six. To recap, Popcorn and Sun advanced from Group A while Crocodile and Seahorse moved forward from Group B.

Here’s a closer look at the three mystery celebs who’ll give it their all in front of America on Nov. 26:

Mushroom
Round 1 performance: “This Woman’s Work” by Maxwell
Round 2 performance: “If I Could Turn Back Time” by Cher
Panelists’ guesses: Donald Glover, Usher, Frank Ocean, Adam Lambert, Jaden Smith