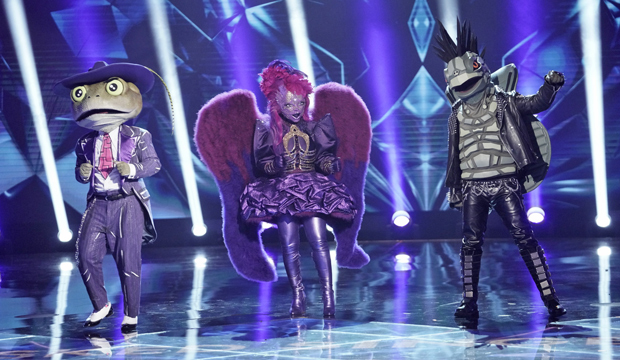 Heading into “The Masked Singer” Season 3 finale, only three costumed celebrities remained in the running to win the Golden Mask: Frog, Night Angel and Turtle. Were Gold Derby’s odds correct that Frog would ribbit his way to the winner’s circle, joining T-Pain (Monster) and Wayne Brady (Fox), or did Night Angel or Turtle prevail instead? And did the expert panel of judges — Robin Thicke, Nicole Scherzinger, Jenny McCarthy and Ken Jeong — correctly guess any of the three secret identities?

Below, read our minute-by-minute “The Masked Singer” recap of Season 3, Episode 16, titled “Couldn’t Mask For Anything More: The Grand Finale,” to find out what happened Wednesday, May 20 at 8:00 p.m. ET/PT. Then be sure to sound off in the comments section about your favorite costumed celebs on Fox’s reality TV show and reflect on every reveal in every season.

8:00 p.m. — “Previously on ‘The Masked Singer’!” In last week’s 15th episode, the remaining four celebs gave it their all in the semi-finals, but it was the end of the road for Rhino. The horned mammal then removed his mask, revealing baseball player Barry Zito. “I just had such a great time. This stretched me in so many ways,” he told host Nick Cannon in his post-show interview. Tonight, what will be the finishing order of the final three contestants? Let’s go!

8:10 p.m. — The Frog is up first tonight and he confesses that the first time he walked onto the stage he felt lost. He’s not a professional singer or dancer, but the more he pushed himself the Frog felt like he was in exactly the right place. He’s proven that as a rapper, he’s got just as much vocal chops as the singers. Becoming the Frog has given him back his first love of music and now he’s ready to take the title. He’s singing “Bad Boy For Life” by Black Rob, Mark Curry and P. Diddy. As usual, his verses are on point and he’s the consummate performer as he dances across the stage. Nicole thought the performance was worthy of the MTV Music Awards. Robin compliments his swag and breath control. The panel thinks the Frog is Lil’ Romeo (based on the “No Limits” clue), Kid Cudi (based on the trolling clue) or MC Hammer (based on the the bullying clue).

8:20 p.m. — The Turtle is ready to turn up next and he admits that when he started this journey he had no idea how much this competition would change him as an artist. It’s allowed him to take risks he never would have dreamed of. In his career he’s definitely had a lot of “almost” moments and things didn’t turn out the way he had planned. Despite his failures, he’s only developed a thicker shell because performing is what he’s meant to do. Tonight he’s singing “Before You Go” by Lewis Capaldi. He’s trying to tug on those heartstrings from the audience with a romantic ballad and he’s nailing the vocals. This is his best performance to date and the Turtle came to PLAY tonight! The Turtle brought Nicole to tears and the panel thinks he could be Jesse McCartney, Nick Jonas or Nick Carter.

8:30 p.m. — The Night Angel is last to perform for the golden mask and she says she was terrified to fail when she started this journey. This experience allowed her to channel her fear and channel it into confidence she never knew she could have. When Night Angel didn’t find success as a solo artist she decided to start other businesses behind the scenes to take care of her family, but now that her kids are grown she wants to inspire them to never give up on their dreams. Tonight she’s singing “River Deep, Mountain High” by Tina Turner. Her voice sounds strong as ever on this soulful track and she may have done enough to win the night, but going through some dance moves would have probably been icing on the cake. She’s brought to tears by the panel’s positive feedback and they think Night Angel could be Taraji P. Henson or Kandi Burruss.

8:40 p.m. — The panel and studio audience submit their final votes of the season. The singer finishing in third place is the Frog! Wow! I thought he was going to take the title. But before the amphibian pulls off his mask, the panel gives their final guesses: Kid Cudi (Ken), Lil’ Romeo (Jenny) and Bow Wow (Robin and Nicole). At last, it’s time to see who’s right! The Frog pulls off his mask and reveals himself to be Bow Wow!

8:50 p.m. — Now it’s time to find out who finished in second place and which singer has won the golden mask and the Season 3 title. The winner is the Night Angel! She becomes the first female to win the golden mask trophy and she can’t believe it. But before we see who the Night Angel is, we have to find out who the Turtle is. The panel submits their final guesses: Nick Jonas (Ken), Jesse McCartney (Nicole and Jenny) and Adam Lambert (Robin). The Turtle finally pulls off his mask and it is indeed Jesse McCartney!

8:59 p.m. — It’s time to find out the identity of the new queen of “The Masked Singer,” Night Angel. But not before the panel submits their final guesses: Taraji P. Henson (Nicole), Tisha Campbell (Ken) and Kandi Burruss (Jenny and Robin). Finally, it’s time to find out once and for all who the champion hiding inside the Night Angel costume is. It’s Grammy-winning singer-songwriter, entrepreneur and reality TV star Kandi Burruss! What a finale.