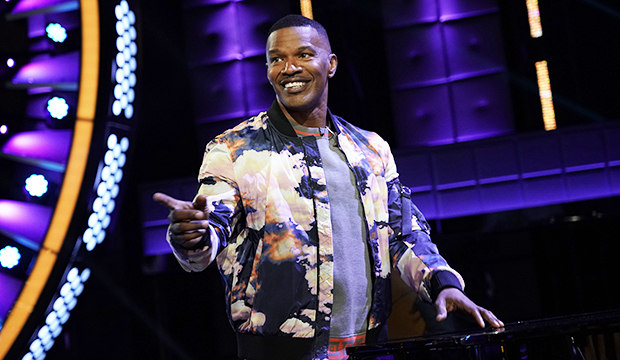 Jamie Foxx was not the Fox on Season 2 of “The Masked Singer,” but he will be on “The Masked Singer” next season. The Oscar winner will serve as a guest panelist on the Season 3 premiere, which, as previously announced, will bow after the Super Bowl on Feb. 2, Fox announced Tuesday at the Television Critics Association winter press tour.

Foxx will sit alongside the regular panelists Ken Jeong, Jenny McCarthy, Nicole Scherzinger and Robin Thicke to try to discern the newest batch of crooning celebs.

The actor and singer, who hosts Fox’s “Beat Shazam” (corporate synergy FTW!), was heavily predicted to be under the Fox mask in Season 2 — 32 percent of our readers believed it was him — but it turned other to be another smooth-voiced star, Wayne Brady, who won.

SEE ‘The Masked Singer’ trailer: ‘Season 3 is about to be lit,’ teases Nick Cannon [WATCH]

Season 3 will feature 18 masked stars, who will be split into three groups of six: Group A, Group B and Group C. The first three episodes of the season will focus on Group A, paring it down to three singers, unmasking as they go. Group B and Group C will then follow the same format. The final nine masked from all three groups will then sing for the Golden Mask Trophy. Per Fox, this season’s contestants have 69 Grammy Award nominations, 88 gold records, 11 Super Bowl appearances, three stars on the Hollywood Walk of Fame, more than 160 tattoos and one title in the Guinness Book of World Records between them.

New costumes this season include the Robot, the Frog, the Banana, the Mouse, Miss Monster and the Llama.