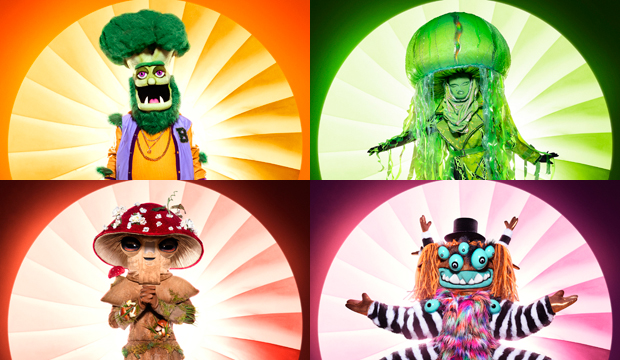 Heading into the sixth episode of “The Masked Singer” Season 4, Group C was down to only four costumed characters: Broccoli, Jellyfish, Mushroom and Squiggly Monster. Each contestant gave it their all on the stage during the playoffs, but at the end of the episode one received the lowest number of votes and was forced to remove their mask in front of America. Did any of the regular panelists (Robin Thicke, Ken Jeong, Jenny McCarthy and Nicole Scherzinger) or the week’s special guest judge (Wayne Brady) correctly guess the unmasked singer’s true identity? How about YOU at home?

Below, read our minute-by-minute “The Masked Singer” recap of Season 4, Episode 6, titled “The Group C Play Offs – Funny You Should Mask,” to find out what happened Wednesday, November 4 at 8:00 p.m. ET/PT. Then be sure to sound off in the comments section about your favorite costumed characters on Fox’s reality TV show, reflect on every reveal for all seasons, and tell us who you think will ultimately join the “Masked Singer” winners list.

8:00 p.m. — “Previously on ‘The Masked Singer’!” In the fifth episode, both Jenny and Nicole correctly guessed talk show host Wendy Williams was actually the bright red Lips. “I can’t sing, I can’t dance, but I know how to have fun,” she revealed in her unmasked interview with host Nick Cannon. The other Group C celebs all advanced to the playoffs, so we’ll see them take the stage one by one throughout the night. Who will be following Williams out the front door? Let’s find out!

8:05 p.m. – The Group C playoffs begin with a special guest masked singer dressed with a television set on his head. The panel was perplexed about Mr. TV’s identity while he crooned “Memories” by Maroon 5, but eventually figured it must be Jamie Foxx. Mr. TV then pulled off his mask, revealing himself to be Season 2 champ Wayne Brady, who apparently still has the skills to fool the panel. Wayne will be joining the remainder of this episode as a guest panelist.

8:15 p.m. – Mushroom is up first in tonight’s competition and he reveals he’s here to win the world over, one song at a time. In his clue package, we see a young shroom in North Spore High, toting a burn book which could be a clue to “Mean Girls.” He was around strange food and customs as a kid, but then realized we’re all entangled together as one. We also see clues about being an outcast, we see a tiara and a Santa Clause in leopard print. Tonight Mushroom is singing “If I Could Turn Back Time” by Cher. This fungus is by far the best singer in Group C and tonight he’s showing off those chops again. I’m guessing it’s someone who has been on Broadway based on the clues. Last week Mushroom sang mostly in falsetto and this week his belting range was on fully display and Jenny said he might be unbeatable. His magic clue tonight is what appears to be a human brain on a plate.  The panel guesses Mushroom could be Donald Glover, Adam Lambert or Jaden Smith.

8:25 p.m. – Up next is Broccoli, who loves rocking his costume. We see a reference to the film “Goodfellas” while he says he dreamed of being a superfood that enriched peoples’ lives. We also see the Copacabana club with an address of 900. Broccoli said one night he had dinner with the “Big Cheese” who asked for his helped, and he cooked him up a special recipe (we see a pizza). It might be a chef? Tonight Broccoli is singing “Hello” by Lionel Richie. He sounds like an older gentleman, but he’s got a decent voice! This is a dramatic performance, but definitely shows a new side to the vegetable. His magic clue is a roulette table, which seems like a clue about Las Vegas. The panel guesses Broccoli could be Wayne Newton, Martin Short or Jason Alexander.

8:35 p.m. – The third singer tonight is the Squiggly Monster. We see him in the Oval Office while he references an “Inconvenient Truth.” He went through a lot of trauma as a kid and soon realized laughter was the best medicine. We see a penguin, a banana and a football. Later we see him eating a whole lot of burritos. Tonight Squiggly Monster is singing “(I Can’t Get No) Satisfaction” by the Rolling Stones. He’s not the best singer, but he always looks to be having fun on stage. Squiggly Monster has the panelists up dancing and he definitely gets bonus points for bringing some fun to the stage tonight. His magic clue is a big Teddy bear. The panel thinks Squiggly Monster could be Ted Danson, David Hasselfhoff or Al Gore.

8:50 p.m. – Last up in the Group C playoffs is the Jellyfish. She’s super competitive, but her nerves got the best of her last week. She said she’s used to being one of the best at what she does, and on “The Masked Singer” she’s missing the people who pick her up when she falls, her family. We see a ship called the USS Big Bird and a candle while she talks about how her parents sacrificed a lot to help her live out her dreams. She called out “Papa Joey” and we see them doing yoga. She also mentioned how her dad would take her to gigs with him. Tonight Jellyfish is singing “Crazy” by Patsy Cline. Jellyfish is definitely outdoing her last performance. Her voice is composed, controlled and she has great tone. Jellyfish’s magic clue is a stuffed tiger. The panel thinks Jellyfish could be Sophia Richie, Lana Condor, Jamie Lynn Spears or Halle Bailey.