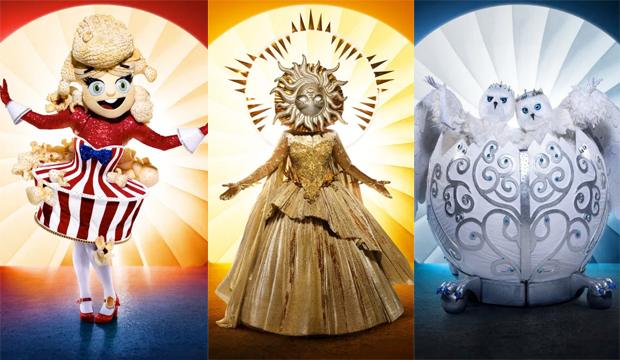 Heading into this week’s episode of “The Masked Singer” Season 4, Group A was down to only three costumed characters: Popcorn, Sun and Snow Owls. Each contestant gave it their all on the stage during the finals, but at the end of the episode one received the lowest number of votes and was forced to remove their mask in front of America. Did any of the regular panelists (Robin Thicke, Ken Jeong, Jenny McCarthy and Nicole Scherzinger) or the week’s special guest judge (Niecy Nash) correctly guess the unmasked singer’s true identity? How about YOU at home?

Below, read our minute-by-minute “The Masked Singer” recap of Season 4, Episode 7, titled “The Group A Finals – The Masked Frontier,” to find out what happened Wednesday, November 11 at 8:00 p.m. ET/PT. Then be sure to sound off in the comments section about your favorite costumed characters on Fox’s reality TV show, reflect on every reveal for all seasons, and tell us who you think will ultimately join the “Masked Singer” winners list.

8:00 p.m. — “Previously on ‘The Masked Singer’!” In the sixth episode, Robin, Jenny and Ken all correctly guessed actor/comedian Bob Saget was actually the Squiggly Monster. “I get to be part of your joy and it’s needed so bad,” he revealed in his unmasked interview with host Nick Cannon. The other Group C celebs all advanced to the playoffs, so we’ll see them return to the stage at a later date. But tonight it’s all about Group A. Let’s get this party started!

8:07 p.m. — Only two singers from Group A can advance to the Super Six and by the end of the hour one (or two?) celebrities will be unmasked. The top vote-getter will advance automatically and the other two will battle it out in a Smackdown. Let the Group A Finals begin! Sun, Popcorn and the Snow Owls kick things off with the Pink anthem “Raise Your Glass” to pump up the audience. Nicole says this will be the greatest showdown they’ve had on “The Masked Singer.”

8:20 p.m. — The Sun is the first to take the stage and admits it feels good to perform again after all these months. Her “sol mate” says the last few months of isolation have been challenging for them (we see wind chimes with angel wings) and they tried to make the most out of their time off by taking their RV out on road trips (we see the city of Baltimore). They realized they don’t need much to be happy (we see Alaska featured) they just need each other. He said Sun really misses entertaining people and she’s never gone this long without spreading her light to the rest of the world (we see cows and a sign that reads, “Greetings from Mexico”). Tonight the Sun is singing “Piece of My Heart” by Janis Joplin. While Sun has hid her country roots quite well up until now, they’re really coming through on this song. She sounds fantastic as she belts out this classic and I just can’t imagine her missing out on the finale. I also can’t imagine this is anyone but country superstar LeAnn Rimes. For a final clue, we learn the Sun is actually golden. She’s got at least one single that’s been certified Gold. The panel thinks the Sun could be Katharine McPhee, Jewel or Demi Lovato.

8:30 p.m. — The Snow Owls are up next, and they admit sharing a stage is new to them, but being together like this feels more and more like home. A good friend of theirs gives us a few clues about the from a snowy woods. We see an airplane as he says, “For two total opposites they really compliment each other.” We also see a rocking horse and a cocktail. It seems as though the male is the bigger star, based on the clues. And I’m guessing they’re from Nashville. Tonight the Snow Owls are singing “The Prayer” by Andrea Bocelli & Celine Dion. I know they hinted that the man was the bigger star, but she’s really standing out vocally for me on this song. They’re extra clue is that they’re two Snow Owls kissing in a tree. So they’re not brother and sister. The panel thinks they could be Brad Paisley & Kimberly Williams-Paisley, Amy Grant & Vince Gill or Danny DeVito & Rhea Perlman.

8:40 p.m. — Popcorn is the last to perform and she admits she feels great every time she walks on stage, but she wouldn’t be where she is with her Queen BFF. Her BFF says she knows Popcorn through a mutual friend and there is hints of a Russian connection. We also see a deer and some bunny ears. The BFF also says she’s been on “The Masked Singer” before herself, which is a major clue. I’ve thought for quite some time that Popcorn is Taylor Dayne and I think her BFF is “King of Queens” star Leah Remini, who has been a guest panelist before. Tonight Popcorn is singing “Domino” by Jessie J. It takes a killer range to pull this song off and Popcorn has it. I love the party she’s bringing to the stage. Popcorn’s game-changing clue is her BFF revealing that one of the panelists has guessed Popcorn’s true identity for another singer in the show’s history. The panel now thinks Popcorn could be Taylor Dayne, Cyndi Lauper or Anita Baker. Niecy throws in one more guess of Anika Noni Rose.

8:50 p.m. — The votes are in and the first-place singer going directly to the Super Six is the Sun! That means the Snow Owls and Popcorn will compete in the smackdown. The Snow Owls sing first, going with “Because You Loved Me” by Celine Dion. These two have great voices, but because of their costume they never move around. I’m tired of all the ballads. Popcorn comes back with “(Everything I Do) I Do It For You” by Bryan Adams and she sounds brilliant. They need to keep Popcorn, but will they? It’s up to the panel to decide.

8:59 p.m. — After an intense deliberation, the panel has eliminated the Snow Owls. Popcorn will advance to the Super Six. At last, it’s time for the Snow Owls to unmask, but first, the panel must reveal their first impression and final guesses. Robin’s first guess was Amy Grant & Vince Gill and he’s sticking with it. Jenny’s first impression was Maureen McCormick & Barry Williams but she’s shifting to Amy Grant & Vince Gill. Ken’s first impression was Derek & Julianne Hough but he’s switching to Danny DeVito & Rhea Perlman. Nicole’s first guess was Donny & Marie Osmond, but she’s now switching her guess to Clint Black & Lisa Hartman Black. Last, Niecy puts all her money on Harry Hamlin and Lisa Rinna. Finally, the Snow Owls unmask and reveal themselves to be country superstar Clint Black and his wife, actress Lisa Hartman Black! It’s sad to see them go, but they had a good run (or flight).