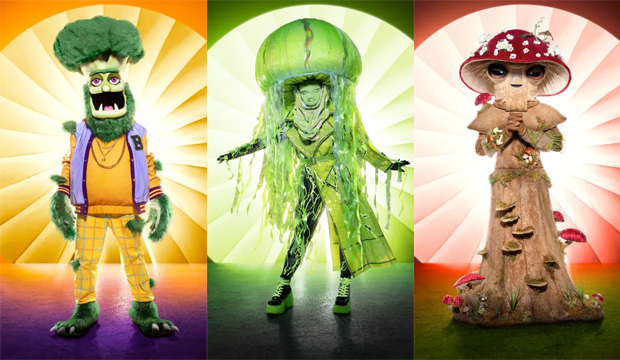 In honor of Thanksgiving, “The Masked Singer” aired a special turkey-day episode on Thursday night in which the Group C finalists — Broccoli, Jellyfish and Mushroom — gave thanks to their loved ones. It was an emotional episode that sadly still ended with one of them receiving the lowest number of votes and having to unmask in front of America. Guest judge Jay Pharoah joined celebrity sleuths Robin Thicke, Ken Jeong, Jenny McCarthy and Nicole Scherzinger on the panel this week.

Below, read our minute-by-minute “The Masked Singer” recap of Season 4, Episode 9, titled “The Group C Finals – The Masks Give Thanks,” to find out what happened Thursday, November 26 at 8:00 p.m. ET/PT. Then be sure to sound off in the comments section about your favorite costumed characters on Fox’s reality TV show, reflect on every reveal for all seasons, and tell us who you think will ultimately join the “Masked Singer” winners list.

8:00 p.m. — “Previously on ‘The Masked Singer’!” In the eighth episode, there was a double unmasking with both Lonzo Ball (Whatchamacallit) and Dr. Elvis Francois (Serpent) being sent home in the Group B finals. Ken correctly named the NBA player as the Whatchamacallit, while Nicole was alone in thinking the singing surgeon was the Serpent. That meant both Crocodile and Seahorse advanced to the Super Six, joining Popcorn and Sun from Group A. But enough about last week, it’s time to find out who’s eliminated from Group C!

8:05 p.m. — The Group C finalists kicked off the show singing “I Want You Back” by the Jackson 5 as a trio. They’re definitely the least talented group, vocally, of the season. Mushroom has some pipes but Broccoli and Jellyfish definitely seem like amateur singers.

8:15 p.m. — Jellyfish will begin the solo rounds, inviting a special guest along with her to give us some clues to her identity. Being on “The Masked Singer” is a dream for Jellyfish because she and her “number crunching” sister are superfans. In the clue package, her sister appears in a pantsuit with a calculator reading “57714.” If that is a reference to a zip code, it’s Allen, South Dakota for anyone interested in looking into that. There are various other office supplies and her sister mentions that Jellyfish has already “ticked off” people, which makes me wonder if she’s a TikTok star. We also see a nail file and Jellyfish singing in a karaoke bar. Tonight Jellyfish is singing “Don’t Stop Now” by Dua Lipa. This is definitely Jellyfish’s best vocal to date and the panel seems pleasantly surprised. Jenny screams, “She killed it!” Ken says she has a great shot at competing with Sun, Popcorn and Seahorse in the Super Six. For an added clue, we learn Jellyfish has never performed on a stage quite like this before. The panelists think Jellyfish could be Charli XCX, Kylie Jenner or McKayla Maroney.

8:30 p.m. — The Mushroom has had a blast throwing the panel off his scent and the only person who knows he’s competing is a real-life government agent, here to share some clues about Mushroom’s identity. It sounds like this agent as known Mushroom since they were kids and there’s a creepy doll placed on this desk. He reveals that Mushroom was class president in high school and had a GPA over 4.0. We see initials “K.I.T.” which mean “keep in touch” in the context used, but they could mean something else if they’re a clue to his identity. Along with the doll we a see a bull and a boxing ring. Tonight Mushroom is singing “Unconditionally” by Katy Perry. He’s nailing this vocal, sending goosebumps to the panel as he hits the chorus. Nicole says Mushroom is frustrating her the most because every performance is transcending. For a final clue we learn Mushroom’s name he goes by now was not his name when he first sprouted. The panel thinks Mushroom could be Jaden Smith, Taye Diggs or The Weeknd.

8:40 p.m. — Last up in the Group C finals is Broccoli. He’s no stranger to women fawning over him and says, “Ladies love a frontman.” In his clue package, some special friends of Brocolli say he’s larger than life and loves to light up a room. We see dice, a “Jason” mask, and various other clues that might hint at being a Vegas performer. As a kid, Broccoli used to sneak to the circus and dream about being one of the performers. There’s also a brief glimpse of a stuffed moose. Tonight Broccoli is singing “Old Time Rock & Roll” by Bob Seger. He definitely sounds like an older gentleman and he’s not a great singer, but he can carry a tune. He also just sort of stands in one place. I think Broccoli could be pulling off his green sprouts tonight. As a final clue we learn Broccoli was born before the microwave was invented (1946). The panel thinks Broccoli could be Al Roker, Ringo Starr or Paul Anka.

8:50 p.m. — The votes are in and the singer with the most votes, going straight to the Super Six, is Jellyfish! Wow! I’m shocked Mushroom didn’t take that, but congrats to Jellyfish, who swims into the next round. Now Mushroom and Broccoli will engage in a vicious smackdown to keep their masks on. Broccoli is up first singing “Take Me Down” by Alabama. He gets up in Mushroom’s face as he croons the country classic and probably gives his best vocal to date! Next, Mushroom sings “A Song For You” by Donny Hathaway and it’s really just out of Broccoli’s league, vocally. The panel will decide who moves on and they deem Mushroom the winner of this smackdown! He will head to the Super Six while Broccoli unmasks.