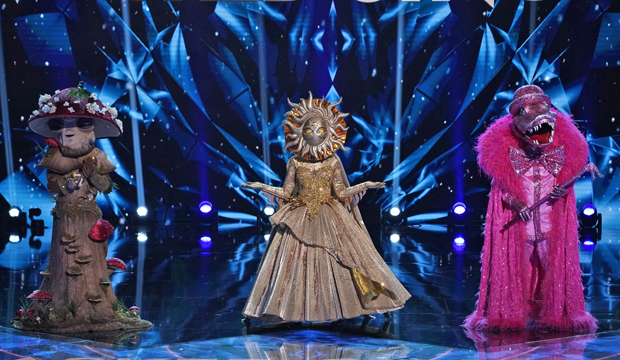 It’s been a wild season of shocking reveals, awful judges’ guesses and one historic self-unmasking, but “The Masked Singer” has finally crowned a winner. The fourth season ended on December 16 with either Mushroom, Sun or Crocodile winning the coveted Golden Mask. (See Gold Derby’s finale racetrack odds.) In addition, one of the main panelists — Jenny McCarthy, Robin Thicke, Nicole Scherzinger or Ken Jeong — took home the first-ever Golden Ear trophy. How did the season finale play out on Wednesday night? Did YOU guess the secret identities of the final three costumed contenders?

Below, read our minute-by-minute “The Masked Singer” recap of the Season 4 finale, titled “The Last Mask Standing,” to find out what happened Wednesday, December 16 at 9:00 p.m. ET/PT. Then be sure to sound off in the comments section about your favorite costumed characters on Fox’s reality TV show, reflect on every reveal for all seasons, and tell us who you think will ultimately join the “Masked Singer” winners list.

9:00 p.m. — “Previously on ‘The Masked Singer’!” In the semi-finals episode, there was a triple unmasking as viewers said goodbye to three of the Super Six. Popcorn was unmasked first, revealing singing veteran Taylor Dayne. Then Jellyfish removed her costume, proving Ken’s guess of Olympian Chloe Kim correct. Finally, pop singer Tori Kelly took off her colorful Seahorse mask. With their eliminations, only three remained in the competition: Mushroom, Sun and Crocodile. Who will win tonight? Let’s go!

9:08 p.m. — Crocodile was sure he would lose to the Seahorse in the Super Six, so he feels blessed to be in the finale. Tonight he picked a song that’s deeply personal to him. Growing up his family was dirt poor, so he mowed lawn after lawn to afford his first album: “Frontiers” by Journey. Tonight he’s singing a song by that same band, “Open Arms.” It’s a massive power ballad that he has no trouble handling vocally. Robin says it felt like Crocodile had been waiting to sing that song his whole life. As an extra clue, Crocodile gives Jenny a gift — a little angel.

9:15 p.m. — Being the Mushroom has been transformative for the next singer. His ultimate inspiration was his daughter. He copied her mannerisms and personality, but she doesn’t even know he’s on the show! He says while most of us have heard his music on the radio, not many of us know him by name. He will sing his daughter’s favorite song for the grand finale, “I Wish” by Stevie Wonder. He’s got a grit in his voice we haven’t heard before, but I shouldn’t be surprised. He sounds different every week! He’s definitely killing this performance. Mushroom’s special gift is for Nicole — cookie dough ice cream.

9:25 p.m. — The Sun has been in the industry since she was a kid. Depending on when the audience discovered her may alter what they think of her. They may see her as a kid with big dreams, a pop princess or the grounded woman she is today. As the Sun, she gets to show that she’s all of those things and more. Tonight she sings a tribute to the person who has loved her through her toughest times, “The Story” by Brandi Carlile. Consistently a vocal powerhouse, this week is no different and the song sounds like a winning anthem to me. The panel thanks the Sun for her inspiration and then she gives Robin a gift — a mistletoe.

9:35 p.m. — It’s time for the final vote of the season. The performer with the most votes will win the Golden Mask trophy. The votes are in and the third place finisher is the Crocodile. Before we find out his true identity, we’ll have to review the first impression guesses from the panel. Ken thought the Crocodile was Bradley Cooper, but now says he is Nick Lachey. Nicole’s first guess was actually Lachey, but now she says it’s Jordan Knight. And Knight was actually Robin’s first guess (oddly enough) but now he says it’s Howie D. Jenny’s first guess was Nick Carter and she’s sticking to it! The time comes for the Crocodile to remove his mask and it is, indeed, Nick Carter! That’s another point for Jenny in the Golden Ear contest.

9:50 p.m. — The singer in second place is Mushroom. That means the Sun is the Season 4 champion! But before she unmasks we have to find out who Mushroom is. The first impression guesses have been retrieved. Jenny thought Mushroom was Maxwell but switched to Ne-Yo. Ken’s first guess was Justin Timberlake, but now says it’s Pharrell. Nicole’s first impression was Donald Glover, but now she says Aloe Blacc. Robin initially thought it was Billy Porter and now agrees with Nicole, it’s Aloe Blacc. Mushroom pulls off his mask and reveals that Nicole and Robin are right. It’s Aloe Blacc!

9:59 p.m. — At last, we find out who is behind the mask of the Season 4 champion, the Sun. But first, Jenny is presented with her Golden Ear trophy for her four correct first impressions. But who did the panel initially think the Sun was? Jenny thought it was Demi Lovato, but changed her mind to LeAnn Rimes. Ken thought it was Gwyneth Paltrow, but now says Mandy Moore. Nicole believed it was Katharine McPhee but now agrees with Jenny, it’s LeAnn Rimes. Robin believed it was Natasha Bedingfield, but now says Katharine McPhee. The Sun pulls off her mask and we finally find out, she’s LeAnn Rimes! Congrats to the country superstar for winning Season 4 with such a different sound than we’ve known her for in the past. That’s a wrap! But Season 5 will be back in the spring.