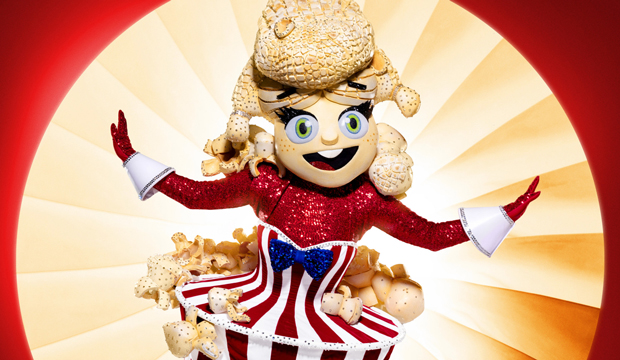 One of the remaining contestants in Group A of “The Masked Singer” didn’t make the cut in episode 7, which aired on FOX on November 11. The strongest singer of this bunch is the one disguised as Popcorn. While we can’t see her face, we are certain we recognize her voice, with its signature style.

Popcorn performed on the premiere where she blew the roof on the joint with her rousing rendition of the Pink hit “What About Us.”  Then on episode 3 she changed genres and made the ballad “Falling” by Harry Styles her own. We are certain that we know the name of the celebrity hiding inside the Popcorn costume. We ruled out those guesses by the judges that it is Mary J. Blige, Gloria Gaynor or Tina Turner. Keep reading as we’ve got all “The Masked Singer” spoilers, including the real name of Popcorn.

We think that Popcorn is singer Taylor Dayne who came to fame in the 1980s. Don’t believe us? Well consider the way that Taylor’s life fits in with the kernels of facts about Popcorn:

One of the clues videos included an image of “Snacks in the City” that made us think of the TV show “Sex and the City.” The second film version of this Emmy winner included a song by Taylor on its million-selling soundtrack.

Collectively the season 4 contestants on “The Masked Singer” have sold over 280 million records. Taylor has racked up worldwide sales topping 75 million. Each of her first two albums — “Tell It to My Heart” and “Can’t Fight Fate” — was certified double platinum; as a group, the contestants can boast of 23 platinum records.

Taylor reaped two Grammy bids for her debut disc; in total, the 17 celebrities on this season of “The Masked Singer” have contended 46 times for music’s biggest honor.

Popcorn told us that love played a big part in her success; Taylor topped the charts with the romantic ballads “I’ll Always Love You” and “Love Will Lead You Back.”

In another of the Popcorn clues video, we saw a meatloaf with the sign “welcome to the ‘hood!” Taylor had a big hit back in 1994 with her cover of the Jim Steinman tune “Original Sin.” The following year, Steinman’s longtime collaborator Meatloaf recorded the song for his comeback album “Welcome to the Neighborhood.”

We will only find out if we are right that Popcorn is Taylor Dayne when she is unmasked. That will only happen when she loses a vote or wins the show. Do you think we are right about the true identity of Popcorn? Sound off in the comments section with your best guesses.