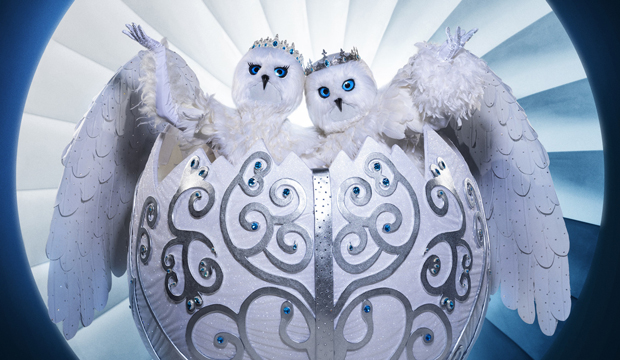 We’ve seen the celebrities competing in Group A on season 4 of “The Masked Singer” only three times but now more than half of them are gone. Of the four celebrities who sang on the November 11 episode, one of the biggest crowd pleasers was the pair of performers hidden inside the Snow Owls costume.

We’ve been wondering who are the famous face behind that elaborate set of masks ever since they performed on the season 4 premiere. Back then, the wowed, this talented twosome wowed the crowd with “Say Something” by A Great Big World. In week 3 they did the same with their cover of the Meghan Trainor and John Legend duet “Like I’m Gonna Lose You.”

We’ve done some digging and rewatched those two performances as well as their clues videos. We are certain that the judges are wrong that the Snow Owls are Donny and Marie Osmond or Amy Grant and Vince Gill. But the panel is onto something with that latter guess. We also think the Snow Owls are are a country music duo who are married in real life.  Keep reading for all “The Masked Singer” spoilers, including the real names of the Snow Owls.

SEE ‘The Masked Singer’ spoilers: Who is Popcorn?

We are certain that the Snow Owls are country music legend Clint Black and his wife of 30 years, actress Lisa Hartman Black.

Clint has racked up album sales of 20 million worldwide. Lisa, who made a name for herself on TV’s “Knot’s Landing” in the 1980s, parlayed that fame into several hit records. (As a group, the season 4 contestants on “The Masked Singer” can boast of record sales topping 280 million.)

Two of Clint’s albums went triple platinum (“Killin’ Time” and “Put Yourself in My Shoes”) while another four have been certified platinum (“The Hard Way,” “No Time to Kill,” “One Emotion” and “Nothin’ but the Taillights”). Collectively, the celebrities have 23 platinum records lining their walls.

Clint and Lisa had a chart-topper with their love song “When I Said I Do.” They earned a Grammy nomination for that duet; Clint has earned another 10 by himself. As a group, the season 4 contestants on “The Masked Singer” have reaped a whopping 46 Grammy bids.

In one of the clues videos we saw a shot of a pearl; Clint and Lisa have a daughter, Lily Pearl Black.

The reference to Quarrel Canyon is a play on the place Laurel Canyon, where the Blacks lived until they moved to Nashville in 2004.