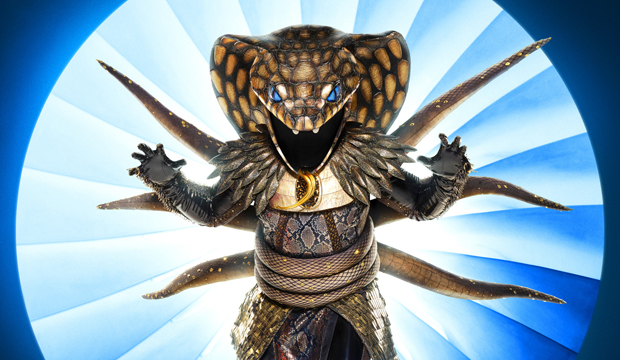 One of the four remaining contestants in Group B of “The Masked Singer” didn’t make the cut in episode 8, which aired on FOX on November 18. The best performer of this bunch is the one disguised as the Serpent. While we can’t see his face, we are sure we know his voice.

The Serpent first performed on September 30 when he rocked the house with his rousing rendition of “I’m Gonna Be (500 Miles)” by The Proclaimers. Two weeks later, he shifted genres and make the country hit “The Bones” by Maren Morris his own.

We are certain that we know the name of the celebrity hiding inside the Serpent costume. We ruled out those guesses by the judges that it is someone from the original cast of the Broadway hit musical “Hamilton.” Keep reading as we’ve got all “The Masked Singer” spoilers, including the real name of the Serpent.

The Serpent is Taye Diggs. He got his start on Broadway before moving west and landing leading roles in blockbuster movies and hit TV shows.

The Serpent revealed that, at times early in his career, he struggled to pay his rent. Diggs paid his dues after graduating from college, taking gigs in small-scale productions. But he certainly didn’t have any more money problems after being a part of the original cast of the smash hit Broadway musical “Rent” in 1996.

The visual clue to the map of the Caribbean ties into Taye’s breakthrough movie role, as the smooth-talker who was the key to “How Stella Got Her Groove Back” (the Serpent has the book “How to Dig Yourself Out of Debt”). In this 1998 adaptation of the Terry McMillan bestseller, the title character, played by Oscar nominee Angela Bassett travels to Jamaica where she falls under the spell of the winsome Winston.

While Winston dreams of being a doctor, Diggs did play one in the “Gray’s Anatomy” spin-off “Private Practice.” We see a shot of medical scrubs in one of the clues videos that would look good on his character, Dr. Sam Bennett.

The Serpent wrote a book; Diggs played an author in the hit film “The Best Man” and its sequel “The Best Man’s Holiday.”

The Serpent gave us a childhood clue that fits Taye to a T: a milk-filled baby bottle. The actor and his son Walker took part in the iconic “Got Milk” ad campaign.

The most telling clue is the prescription bottle with the label marked “PharMASKy, #31118, Serpentine, Dr Cannon.” Those five digits reference key milestones in Digg’s TV career: 3 appearances as Bennett on “Gray’s”; 111 episodes of “Private Practice,” which ran for 8 seasons.

We will only find out if we are correct that the Serpent is Taye Diggs when he is unmasked. That will only happen when he loses a vote or wins the show. Do you think we are right about the true identity of the Serpent? Sound off in the comments section with your best guesses.