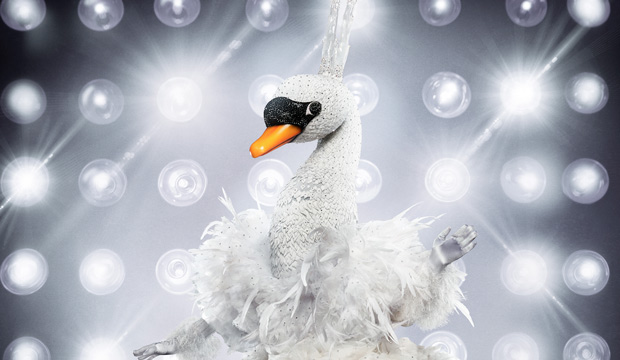 The five remaining contestants in Group C took to the stage again on episode 8 of season 3 of “The Masked Singer,” which aired Wednesday (March 18) on FOX.  Last week saw the first (and last) appearance of the sixth contender from this group: the Bear lost the studio audience vote and was revealed to be politician Sarah Palin.

His one-time competitors are disguised as the Astronaut, Night Angel, Rhino, Swan and T-Rex. We rewatched all of their performances from last week as well as their clues videos. While we were way off base about the Bear (we thought it was YouTube star JoJo Siwa) we are convinced we are on the right track when it comes to revealing the real names of the rest of Group C. Keep reading for “The Masked Singer” spoilers, including the true identity of the Swan, who sang the Peggy Lee classic “Fever” in her first appearance on March 11.

Before she performed we were convinced that the Swan was Jessica Simpson. But now that we’ve seen her strut her stuff we are sure that the Swan is Bella Thorne. Jessica is only 5’3″ while Belle stands 5’8″ tall; the Swan certainly looked about that height standing next to “The Masked Singer” host Nick Cannon, who is an even 6 feet.

Beyond the Swan sharing the same physique as Thorne, many of her mannerisms are similar too. After a career in modelling, Thorne’s big break as an actress came on the Disney channel series “Shake It Up.” She played a dancer and the Swan certainly showed off all the right moves in her clues video.

That video also included several visual references to some of Bella’s acting gigs: a man screaming (“Scream”) and a ghost (“Amityville: The Awakening” and “Boo! A Madea Halloween”).

One of the images featured in the video was a set of vampire fangs; Bella had a make-up line called Filthy Fangs.

We also saw a heart-shaped balloon; Bella sports a colorful red tattoo in that shape on her shoulder. This season’s contestants on “The Masked Singer” have a whopping 160 tattoos between them.

Bella Thorne has spoken often of her hopes of becoming a recording star and even laid down some tracks several years back. “The Masked Singer” would certainly would be a good way to launch a music career.

We will only find out if we were right that the Swan is Bella Thorne when she is unmasked. That will happen if she loses a popular vote or wins the show. Do you think we are correct in our guess about the real name of the Swan? Let us know your thoughts in the comments section with your best guesses.