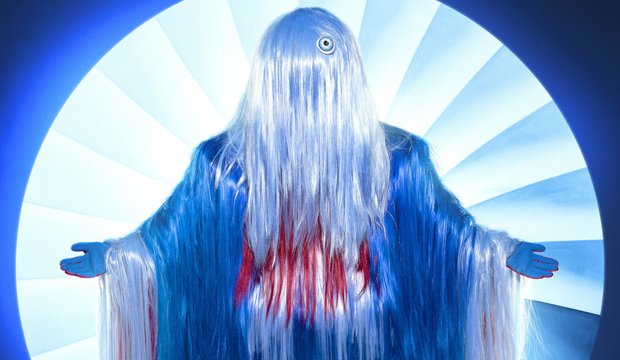 Group B will be down to the final three contenders after the November 18 episode of “The Masked Singer.” Of the four celebrities contending for the Group B championship, the most entertaining, if not the best singer, has been the man in the . Whatchamacallit costume.

He first rocked the house with his energetic version of “I Wish” by Skee-Lo on September 30. He returned two weeks later with another catchy cover, “Money Maker” by Ludacris and Pharrell Williams.

We’ve watched those two performances repeatedly as well as the clues videos for the Whatchamacallit. Keep reading as we’ve got “The Masked Singer” spoilers for all of the remaining Group B contestants, including our best guess as to the real identity of the Whatchamacallit.

We are absolutely sure that Whatchamacallit is an athlete (who else could carry off this cumbersome costume). The jock that knows how to rock is NBA point guard Lonzo Ball, who stands 6’6″ tall.

Ball loves to sing so much that he has recorded two albums: “Born 2 Ball” in 2018 and “BBA (Bounce Back Album)” earlier this year. Both discs made it onto the charts, with the first including the hit single “Melo Ball 1.”

Lonzo’s family are featured in two of the clues: his younger brother, LiAngelo Ball, has the nickname “Gelo” (which is said just like the dessert Jell-O, which popped up in the clues video). And his outspoken father, LeVar Ball, could well be said to outshine him when it comes to time in the spotlight.

In 2019, Ball signed a lucrative deal to play for the New Orleans Pelicans that has already netted him more than $25 million in just two seasons. The contestants on “The Masked Singer” can brag of a combined worth of almost $400 million. There were several visual references that also pointed us in this direction: the number “2” on the clock (that is on Ball’s jersey) and the shot of shrimp (a delicacy associated with NoLa).

Several photos in the clues videos reference Ball’s first teams. The chinos is a shout-out to Chino Hills High School in southern California (where Ball had a 4.o GPA, which is seen on the clock) and the bear is the mascot of the UCLA Bruins, which is part of the Pac-12 (that number is also on the clock).

SEE ‘The Masked Singer’ spoilers: The Serpent is …

Ball was recruited by the Los Angeles Lakers in 2017. Among those in the head office of the Lakers operation at the time was one of the franchise’s most celebrated players, Magic Johnson; that would certainly fit the clue that Whatchamacallit had a “magical” start to his career.

We will only find out if we were correct that the Whatchamacallit is Lonzo Ball when he is unmasked. That will happen if he loses a popular vote or wins the show. Do you think we are correct in our guess about the real name of the Whatchamacallit? Let us know your thoughts in the comments section with your best guesses.