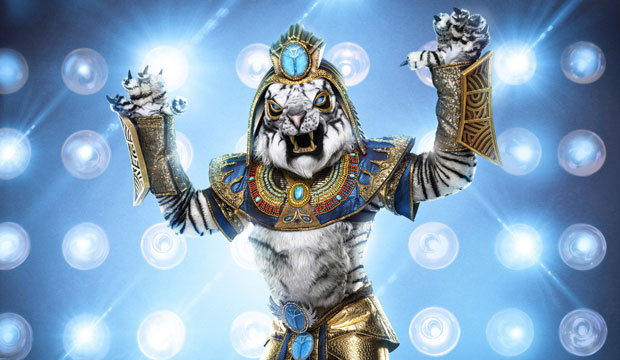 By the end of episode three of “The Masked Singer” on February 12, half of the contestants in Group A will have been unmasked. Of the four celebrities who competed on this third episode of season 3, the one having the most fun on-stage was the one dressed as the White Tiger.

The White Tiger may not have the best voice of the remaining contestants but he is certainly a showman. In his first appearance on the post-Super Bowl premiere, he rocked the house with his rendition of “Ice Ice Baby” by Vanilla Ice. On episode 2, he made the Marky Mark and the Funky Bunch hit “Good Vibrations” his own.

We’ve been wondering who the White Tiger really is so we’ve rewatched those performances as well as the clues videos. Forgot those guesses by the panel that this is someone from the world of professional wrestling like Hulk Hogan. Keep reading for “The Masked Singer” spoilers, including the real name of the White Tiger.

We are certain that the White Tiger is New England Patriots football player Rob Gronkowski. Don’t believe us?  Well consider how many of the clues given in the videos match-up with him.

The clues video has a shot of Abraham Lincoln who famously said in the Gettysburg Address, “four score and seven years ago.” That references the number 87, which just happens to be the number of Gronk’s jersey.

Rob Gronkowski played all nine of his NFL seasons in Massachusetts; the clues video has a shot of a trophy for clam shucking, an activity associated with that state.

Gronkowski played in five Super Bowls (as a group, this season’s 18 contestants on “The Masked Singer” suited up for 11 Super Bowl games).

Rob took part in Shark Week on the Discovery Channel in 2018 when he tagged endangered tiger sharks in the Bahamas.