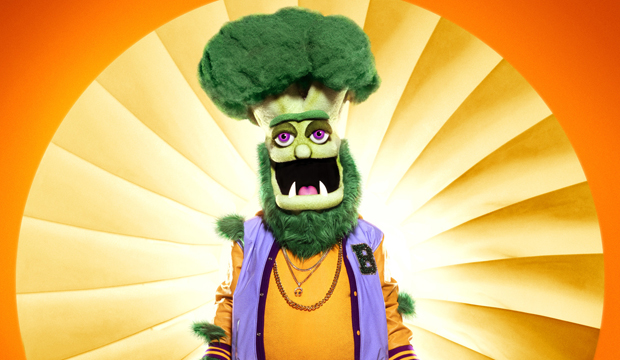 “The Masked Singer” reaches its half point of season 4 on November 4 with the episode entitled “The Group C Play Offs – Funny You Should Mask.” The four celebrities disguised as the the Broccoli, Jellyfish, Mushroom and Squiggly Monster. performed for the second time. These season 4 contestants survived their initial appearances on the show last Wednesday. The fifth member of Group C, the Lips, lost the vote and was revealed to be talk show host Wendy Williams.

We’ve watched those first performances of the remaining quartet of contenders in Group C and have all of “The Masked Singer” spoilers for season 4, including the identity of Broccoli. In his first appearance on October 28, he sang a medley of “House is Rockin’/Whole Lotta Shakin Going On” by Stevie Ray Vaughan and Jerry Lee Lewis respectively. Keep reading if you want to know the real name of the celebrity hiding inside the Broccoli costume.

Before he performed for the first time, we thought the Broccoli was the singer Khalid. However, after seeing him strut his stuff on “The Masked Singer” stage, we realize we were wrong. We now realize that the celebrity hiding inside this jolly green stalk is a veteran Vegas performer: Paul Anka.

This one-time teen idol, who is about to turn 80, is still making music. He came to fame in the 1950s, which would explain his song choices. Anka’s unmistakable voice is smooth and silky, just like the one coming out of Broccoli. And the cumbersome costume is topped off by a varsity letterman jacket with the show’s logo; that looks like a throwback to the kind of clothes kids wore in the nifty fifties, when Anka was at the top of the charts with songs like “Diana” and “Puppy Love.”

That latter hit is referenced by the various shots of dogs in the clues video. And the visual reference to TikTok made us think of another one of Anka’s #1 songs, “Put Your Head On My Shoulder,” which has found a new life on this social media outlet. Broccoli’s big reveal that a contest helped launch his career coupled with that photo of a soup can fit in with Anka’s story that he won a life-changing trip to New York City by collecting Campbell soup can labels.

And Anka ticks several boxes from the collective clues we got about this season’s contestants. As a group, they’ve sold 280 million albums; Anka accounts for 10 million of those. In total, the 17 celebrities are worth almost $400 million. Anka’s fortune runs into the tens of millions, including the royalties from composing Johnny Carson‘s theme song and Frank Sinatra‘s signature tune “My Way.” Anka recorded a Spanish language version, “A Mi Manera,” of the latter that has become a staple of mariachi bands (we see a shot of one of those in the clues video).

We won’t find out for sure if Paul Anka is the Broccoli till he is unmasked. That will only happen if he loses a vote or wins the show. Do you think we are right about the true identity of the Broccoli? Sound off in the comments section with your best guesses.