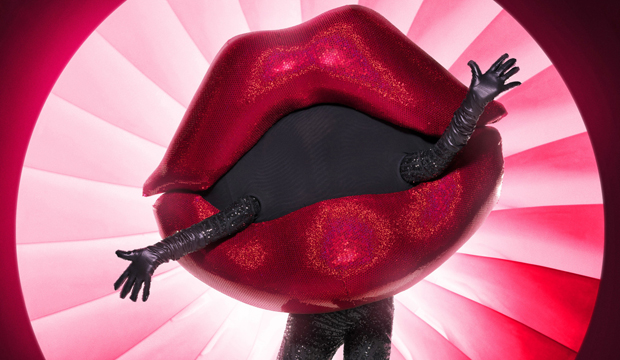 The last batch of celebrities competing on season 3 of “The Masked Singer” made their debut on the episode that aired on October 28. On “Masked But Not Least” the five contestants were completely concealed inside costumes and their faces were hidden behind elaborate masks. At the end of the episode, the four judges — Ken Jeong, Jenny McCarthy, Nicole Scherzinger and Robin Thicke  — make their best guesses. The contestant with the lowest score will be unmasked before being sent packing.

The others will continue on in the competition in the coming weeks. We won’t know who they are till they are eliminated or, in the case of one of them, wins the show. If you can’t wait till then to find out, then keep reading as we’ve got “The Masked Singer” spoilers for all of them, including the Lips.

We’ve already gotten a glimpse of the Lips when FOX released a teaser of her cumbersome costume and highly detailed mask. At this point our best guess as to the real name of the Lips is talk show host Wendy Williams.

Don’t believe us? Well consider this key fact about Williams. Her self-titled talk show has run for 12 seasons. Over those dozen years, Williams has recorded almost 2,000 episodes; as a group, this season’s contestants have appeared in over 5,475 episodes of television.

SEE ‘The Masked Singer’ spoilers: Who is the Jellyfish?

In that sneak peek we saw Lips lounging like a diva on a white couch before getting up close and personal with “The Masked Singer” host Nick Cannon. Both of these clues fit with Williams, who invites her guests to loll back and relax on a couch as she listens to them. Among her most frequent guests is one Nick Cannon, who even pinch hit as host of her show when she was recovering from surgery in 2019. Certainly when Lips let loose with a hearty laugh, we thought she sounded just like Williams.

And isn’t it obvious that someone who talks for a living would be disguised as lips? We’ll only for sure if Wendy Williams is Lips when she is unmasked. That will only happen if she loses a vote or wins the show. Do you think we are right about the true identity of the Lips? Sound off in the comments section with your best guesses.