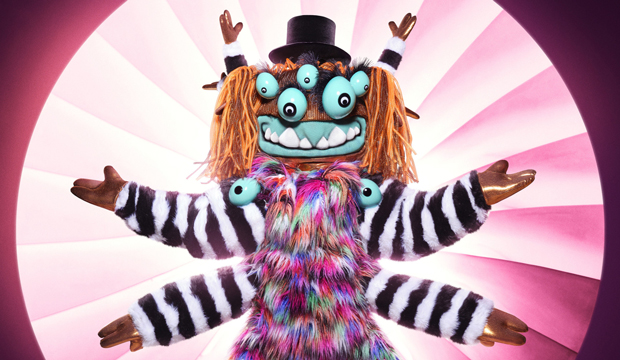 The season contains 16 contestants,[4] including the first duet costume (Snow Owls)[9] and the first puppet costume (Baby Alien). The contestants of this season are said to have a combined net worth over $398 million, 46 Grammy nominations, 23 platinum records, 10 Hall of Fame appearances, one Olympic gold medalist, collectively sold over 281 million records, appeared in over 5,475 episodes of television and 151 films, five Super Bowl appearances, four stars on the Hollywood Walk of Fame, three world records, one Time 100 honor, and one Oscar nominee in a major category

The last five of the 17 celebrities taking part in season 4 of “The Masked Singer” make their first appearance on the October 28 episode. This new crop of talent are hidden inside costumes in the form of Broccoli, Jellyfish, Lips, Mushroom and Squiggly Monster.

At this early stage of the competition, we think that the Squiggly Monster is TV actress Jodie Sweetin, who came to fame as a child on “Full House” and just wrapped up a run in the reboot “Fuller House.” Between these two series, Sweetin appeared as Stephanie Tanner in almost 300 half-hour installments; as a group, this season’s contestants have appeared in a whopping 5,475 TV episodes.

SEE ‘The Masked Singer’ spoilers: Who is the Jellyfish?

The Squiggly Monster readily admits to having been “a wild child.” Over the years, Sweetin has been candid about her struggles with childhood celebrity and substance abuse. She documented all of this in her 2009 bestseller “unSweetined.”

The Squiggly Monster observes, “It’s very fitting I have all these appendages. After all, I’m known for having a lot of hands to latch on too.” Among the lyrics in catchy “Full House” theme song is a line about “hands to hold onto.”

SEE ‘The Masked Singer’ spoilers: Who is Lips?

We see the Squiggly Monster having a party for her dog, something Sweetin’s character did on “Full House” much to the delight of her fans.

SEE ‘The Masked Singer’ spoilers: Who is the Mushroom?