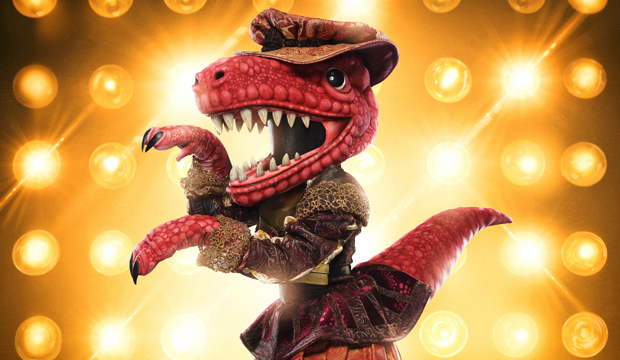 It took till episode 7 of “The Masked Singer” before we saw the last six celebrities taking part in season 3. Indeed, the title of the March 11 show put it plainly: “”Last But Not Least: Group C Kickoff!” These half dozen contestants were completely clad in an costume with their face hidden behind an elaborate mask. They were disguised as an Astronaut, Bear, Night Angel, Rhino, Swan and T-Rex.

One of these six is set to be eliminated at the end of the show while the other five will continue on in the competition in coming weeks. We won’t know who they are till they are eliminated or, in the case of one of them, wins the show. If you can’t wait till then to find out, then keep reading as we’ve got “The Masked Singer” spoilers for all of them, including the T-Rex.

Forgot all those wild guesses about the T-Rex being an actor. People are basing that conjecture on the fact that the T-Rex costume is reminiscent of Renaissance times, with its hat and tunic. That puts some folks in mind of Shakespeare, which leads them to believe it is an Englishman. Among the more popular proposals is that the T-Rex is Tom Hiddleston, who got his start on the stage.

SEE: ‘The Masked Singer’ spoilers: Who is the Night Angel?

Others opt for T-Rex being an American showman. The likeliest suspect on that front is Neil Patrick Harris. This all-around talent has won a Tony for his gender-being performance in “Hedwig and the Angry Inch.” And he earned a Grammy nomination for that show’s cast recording (as a group, “The Masked Singer” contestants have racked up 69 Grammy Awards nominations. But Harris stands an even 6′. And that is a foot or more taller than the T-Rex appears in the preview clip.

Our best guess is that the T-Rex is Olympic gymnast Simone Biles. “The Masked Singer” fans are fixated on the tiny T-Rex. While the celebrity is wearing platform shoes, that can’t disguise the fact that she is petite. Simone stands all of 4’9″. She certainly has the physical stamina that the T-Rex is displaying in the preview clip.

SEE ‘The Masked Singer’ spoilers: Who is the Swan?

We will know a lot more after we see the clues video and the first performance of the T-Rex. But we won’t find out whether we are right that the T-Rex is Simone Biles until she is unmasked. That will happen when one of two things occur: she loses a vote or wins the show. Do you think we are right about the true identity of the T-Rex? Sound off in the comments section with your best guesses.

SEE ‘The Masked Singer’ spoilers: Who is the Astronaut?