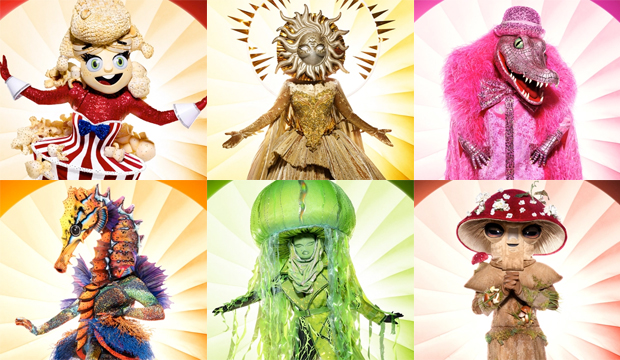 And then there were six. At the end of Thursday’s Thanksgiving-themed episode of “The Masked Singer,” the Super Six contestants were finally revealed: Popcorn, Sun, Crocodile, Seahorse, Jellyfish and Mushroom. These half-dozen celebrities will next be seen in the semi-finals on December 2, where they’ll face off together for the first time outside of their specific groups. Who do you WANT to win Season 4’s Golden Mask? Vote in our poll below and then defend your choice in the comments section.

The panelists (Nicole Scherzinger, Ken Jeong, Jenny McCarthy and Robin Thicke) are still stumped on which secret celebs are hiding inside the extravagant costumes. Below we’ve compiled all of their guesses so far, in addition to which songs the contestants sang in each of the first three rounds. Do you think you know the identities of Popcorn, Sun, Crocodile, Seahorse, Jellyfish or Mushroom?

Whoever wins this Fall 2020 cycle will join the esteemed list of past winners: T-Pain (Monster), Wayne Brady (Fox) and Kandi Burruss (Night Angel). While there is no prize money, the champion does get to take home the coveted Golden Mask trophy. In addition, this year there’s a new Golden Ear trophy at stake for the judge with the most correct “first impression” guesses. So far Jenny is in the lead with three points.

Here’s a closer look at the mystery celebs who have advanced to the Super Six:

Seahorse (Group B)
Round 1 performance: “Only Girl (In the World)” by Rihanna
Round 2 performance: “My Heart Will Go On” by Celine Dion
Round 3 performance: “…Baby One More Time” by Britney Spears
Panelists’ guesses: Halsey, Hailee Steinfeld, Bebe Rexha, Camila Cabello, Jessica Simpson, Kesha, Kellie Pickler, Sia