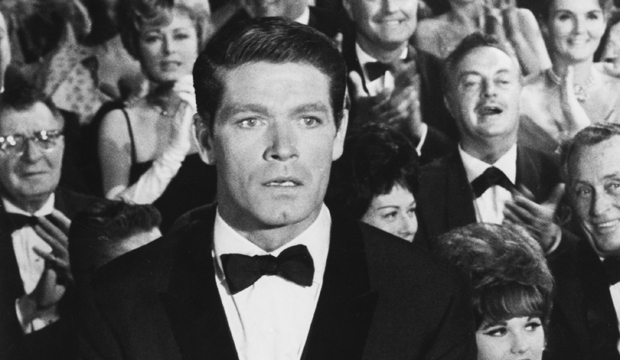 The taglines for the 1966 overstuffed turkey “The Oscar give viewers a preview of the machinations of this camp delight- “The Dreams and the Schemers… the Hustlers and the Hopefuls…All Fight for the Highest Award!”

And you thought there was a lot of campaigning now for the Academy Award!

Kino Lorber has unleashed “The Oscar” just in time for the Academy Awards Sunday on Blu-ray with a brand new 4K restoration and two audio commentaries- one with film historians Howard S. Berger, Steve Mitchell and Nathaniel Thompson and a much more funny and caustic one with comic/actor Patton Oswalt, Oscar-nominated screenwriter Josh Olson (“A History of Violence”) and producer/writer/director Erik Nelson.

“The Oscar” was penned by Harlan Ellison, yes Harlan Ellison of “A Boy and His Dog,” “The Outer Limits” and “The Twilight Zone” fame and the team of Russell Rouse  and Clarence Greene, who penned the 1949 classic noir “D.O.A.,” which also is the perfect word to describe this film, and earned an Oscar for writing the story of the 1959 Doris Day/Rock Hudson comedy “Pillow Talk.”

Rouse also directed this film-with a sledgehammer. In fact, the acting is so over-the-top, I kept thinking Dan Aykroyd would pop out in his Leonard Pinth-Garnell character on “Saturday Night Live” to talk about the film’s “Bad Performances.”

“The Oscar” stars Stephen Boyd as Frankie Fane, a pretty boy who wants fame and will do anything to get it. He claws his way to the top using Jill St. John, Eleanor Parker and Elke Sommer along the way. One person he particularly treats like dirt is his good “friend” and conscious Hymie Kelly (Tony Bennett in his one and only dramatic role-thank god he didn’t give up his day job).

Poor Hymie — I kept thinking about Dick Gautier as Hymie the Robot on “Get Smart” every time I heard his name — attempts to put out all the fires Frankie starts and utters such memorable lines as“Like a junkie shooting pure quicksilver into his veins, Frankie got turned on by the wildest narcotic known to man: success! The parts got bigger and bigger. Frankie got hungrier and hungrier.”

Rounding out the cast are Edie Adams, Ernest Borgnine, Joseph Cotton (who was having denture difficulties), Walter Brennan, Broderick Crawford and James Dunn. And the cameos come fast and furious with Bob Hope, Frank Sinatra, Edith Head, Merle Oberon, Nancy Sinatra, Joan Crawford and Hedda Hopper (she died before the film was released).

And believe it or not, “The Oscar” was nominated for two Oscars: for Head’s costumes — it certainly isn’t among her best work — and the dreadful art decoration and set decoration which Oswalt, Olson and Nelson love to rag on.

There is so much scenery chewing in “The Oscar’ I’m surprised there are even sets.

“The Oscar” begins at the 1965 Academy Awards and its great fun to see the arrivals at the actual ceremony which took place at the Santa Monica Civic. And the Academy actually gave them permission to actually use real Oscars-they must not have vetted the script.

The story is told in flashback by good old Hymie in his voice over: “You finally made it, Frankie! Oscar night! And here you sit, on top of the glass mountain called ‘success.’ You’re one of the chosen five, and the whole town’s holding its breath to see who won it. It’s been quite a climb, hasn’t it, Frankie? Down at the bottom, scuffing for dimes in those smokers, all the way to the top. Magic Hollywood! Ever think about it? I do, friend Frankie, I do.”

Condemned by the Catholic Church, “The Oscar” was pretty much also condemned by critics.

Bosley Crowther in the New York Times found it an “arrantly cheap, synthetic film, which dumps filth and casts aspersions upon the whole operation of Hollywood-a community that may not be perfect but is not so foul as hinted here.”

Of course, the script is just filled with wonderfully cliched lines:

“Why do I always try to destroy the people I love?”

And my favorite line- “Will you stop beating on my ears! I’ve had it up to here with all this bring-down.”

I’m still trying to figure out what that means.

But if you love cinematic dogs, run do not walk to watch “The Oscar.” And it’s shorter than the actual ceremony.