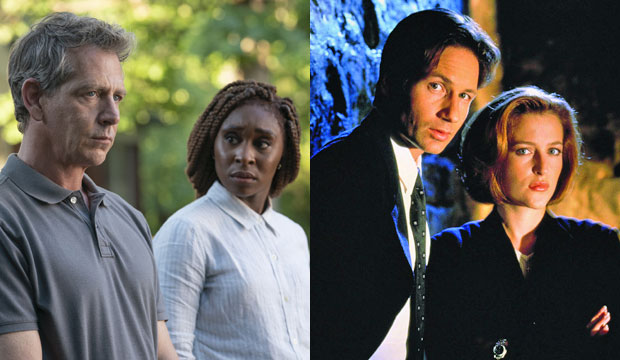 Will the Emmys embrace a horror series where a believer and a skeptic investigate a murder with supernatural overtones? That was the premise of “The Outsider,” which concluded its season on March 8, but it also describes “The X-Files,” the groundbreaking series that helped open doors for genre programs at the Emmys, but couldn’t quite walk through it itself. How will “The Outsider” do with the TV academy?

“The X-Files” was about FBI partners Mulder and Scully (David Duchovny and Gillian Anderson) who investigated unexplained crimes and incidents while also trying to unravel a conspiracy deep within the government. It won 16 Emmys over the course of its run, including one for Anderson as Best Drama Actress, but the show never won Best Drama Series despite four straight nominations (1995-1998).

But then the TV landscape changed. “Lost” won Best Drama Series in 2005, becoming the first sci-fi winner in the history of that category. And HBO’s epic fantasy series “Game of Thrones” won a record-tying four Best Drama titles (2015-2016, 2018-2019). All of a sudden dragons are A-OK with the TV academy, as are robots (“Westworld”) and inter-dimensional monsters (“Stranger Things”). Perhaps that’s good news for El Coco, the creature that terrorizes families in “The Outsider.”

The show has a strong pedigree both in front of and behind the camera. It stars Emmy winner Ben Mendelsohn (“Bloodline”) as the skeptical detective starting to doubt his assumptions in the investigation of a child’s brutal murder. Tony winner and recent Oscar nominee Cynthia Erivo (“Harriet“) plays the private eye brought into the case who begins to suspect something otherworldly is at play.

The cast also includes Emmy and Tony nominee Bill Camp, Oscar nominee and Emmy winner Mare Winningham, SAG Award nominee Julianne Nicholson, BAFTA winner Paddy Considine, and Emmy winner Jason Bateman, who is also a director and producer of the series. It was created by Richard Price based on Stephen King’s novel; Price also wrote the Emmy-winning “The Night Of.”

HBO has had success with other dark, brooding crime dramas in recent years. “The Outsider” follows in the stylistic footsteps of not just “The Night Of,” but also “True Detective” and “Sharp Objects” from the premium network. None of those actually won a top series award either, though, so it wouldn’t just be “The X-Files” that “The Outsider” tries to improve upon.

The show’s ratings increased as the season progressed, a sign of building enthusiasm for it that could keep it alive in academy members’ minds all the way to voting for nominees and winners this summer. Do you think it’ll have an Emmy breakthrough, or will El Coco get away from them?