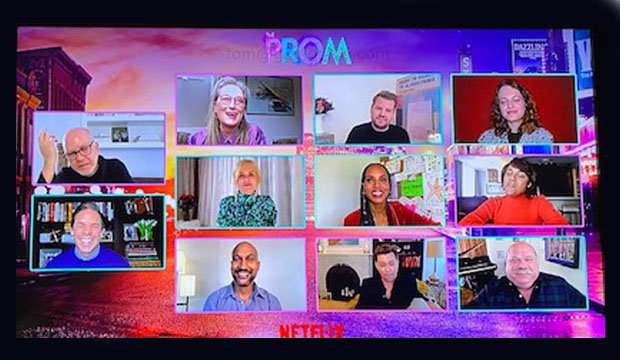 How perfect. Netflix, The Actors Fund, Broadway Cares and American Film Institute gave “The Prom” a virtual world premiere screening on Sunday that looked a lot like the way millions of people will experience this very special film after it debuts on Netflix Dec. 11 this holiday season. With a group. “The Prom” is that kind of movie that will be watched by lots of chums and family members together, who won’t be able to resist hanging around afterward to laugh, cheer, talk about their favorite moments and celebrate its joyous spirit of inclusion and love delivered in a hugely entertaining film of Oscar-worthy perfection.

But this premiere screening group wasn’t just any gang. The webcam roundup included director Ryan Murphy and his stars Meryl Streep, Nicole Kidman, James Corden, Kerry Washington, Keegan-Michael Key, Andrew Rannells, Jo Ellen Pellman, Ariana DeBose and Kevin Chamberlin in a serious discussion and hilarious laugh-a-thon moderated by Broadway journalist Frank DiLella. Together they all lifted the curtain on what went on behind the scenes while filming this adaptation of a controversial recent Broadway musical about an Indiana town that refuses to let a lesbian couple attend their high-school prom.

Everyone spoke about the importance of the story and the powerful impact it had on them emotionally, but especially poignant was Jo Ellen Pellman, who portrays Emma, one of the outcast lesbian lovers. She described her anxiety and the difficulty she had breathing while shooting key scenes. It was a struggle, she said, “to find the optimism and the joy in the face of all of the prejudice and bigotry that she was facing. But Emma remains optimistic and determined in defeat in the face of all of the inequality. And I hope audiences across the world can keep that optimism.”

Pellman is a relative showbiz newcomer who had to summon that same positive drive while pursuing one of the film’s lead roles while being a poor, striving young actress. That spirit ended up paying off, she revealed, when she finally received a phone call that she got the job while she was hanging out in a thrift shop in Brooklyn.

Lots of other “Prom” costars told amusing tales, too. Meryl Streep was downright naughty and hilariously self-effacing. On screen she portrays an outrageously ego-mad Broadway diva whose first musical number is titled “It’s all about me!” “I loved playing someone who, you know, walks in and thinks she owns the room, which, of course, she doesn’t,” she said. “But I love that kind of fun and everybody takes the piss out of her.”

Nicole Kidman tattled on her terror over having to perform a Bob Fosse dance. “I thought I’m never going to be able to climb this mountain because everything is, you know, every little detail, every hand gesture, every finger that moves. But suddenly being educated in that (by a team of professional dancers) made me believe I could do it and it was just wonderful.”

Kerry Washington wasn’t at all shy about dancing. In fact, she insisted upon it. Regardless of the fact that she wasn’t scripted to be included in the film’s big finale, she revealed, “I wormed my way into the dance number at the end because I grew up in musical theater and I love doing musicals.”

In the end, Ryan Murphy ended up stealing his own show, when he talked about why he chose to make the movie. “I wish when I was young I had a film like this to see. I wish that when I was growing up I did not feel so alone in my life. Just like Emma, I’m also from Indiana and I was searching for a community and looking for a place to belong.

“And I just knew that the musical was actually about something. It was about the fight to be seen and to be included in the conversation. And I deeply related to that.

“And I thought it would be a wonderful film to make for Netflix, you know, because two hundred million people all over the world can see this film and get its message, including countries where it’s against the law to be gay. You can actually be killed for being gay. So just overall I loved the message of joy and tolerance that it was about.”