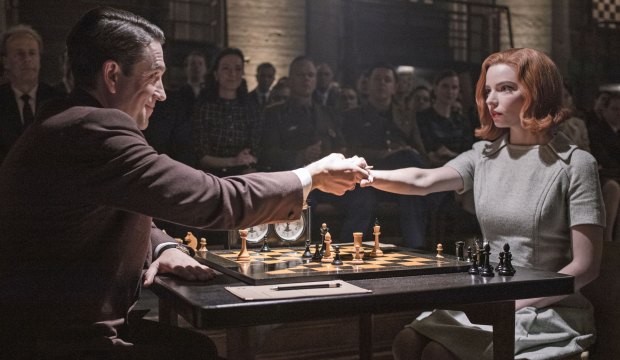 “The Queen’s Gambit” is reportedly one of Netflix’s most watched limited series of all time, and more and more the Gold Derby users who are predicting the Golden Globes think the drama will enjoy an awards windfall too. In particular, most of the Expert journalists we’ve surveyed are now saying it will win Best TV Movie/Limited Series.

Four out of the six Experts who have placed their bets as of this writing are backing “Queen’s Gambit”: Eric Deggans (NPR), Joyce Eng (Gold Derby), Robert Rorke and Peter Travers (Rolling Stone). That’s up from early November when only one Expert (Travers) was forecasting it. The other two, Matthew Jacobs (Huffington Post) and Susan Wloszczyna (Gold Derby), are still predicting recent Emmys sleeper hit “Unorthodox.”

Adapted from the novel of the same name by Walter Tevis, the seven-part “Queen’s Gambit” follows orphan Beth Harmon (Anya Taylor-Joy), who discovers a talent for chess and becomes a champion at a young age despite battling drug and alcohol addictions. And it has the benefit of a wide-open Golden Globes field.

The 90 or so members of Hollywood Foreign Press Association decide the Globes, and they often like to jump on the bandwagon of a movie or limited series that just cleaned up at the Emmys, like the last four Globe champs “The People v. O.J. Simpson” (2017), “Big Little Lies” (2018), “The Assassination of Gianni Versace” (2019) and “Chernobyl” (2020). However, this year’s big winner at the Emmys was “Watchmen,” which aired at the end of 2019 and thus was already eligible for Globes last year (it was shut out by the HFPA).

So the Globes will have to pick something else. Will they go with another Emmy contender like “Unorthodox,” “Mrs. America” or “Normal People,” or will they take the opportunity to anoint a new program? In Best Drama Series and Best Comedy Series categories, voters often prefer buzzy new shows to established favorites, and “The Queen’s Gambit” certainly fits that bill. The gambit could pay off.