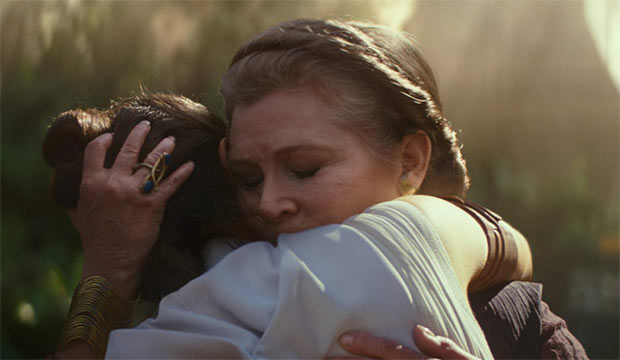 After opening last month, “Star Wars: The Rise of Skywalker” is already on track to earning a billion dollars worldwide. But will box office green lead to Oscar gold for J.J. Abrams‘ last chapter in the “Star Wars” saga? Well, it’s off to a good start. On Monday, Episode IX earned three Oscar nominations: Best Score, Best Sound Editing and Best Visual Effects. That’s the same number as “Star Wars: The Last Jedi” two years ago, but two less than “Star Wars: The Force Awakens” in 2015.

For Best Score, “Star Wars” competes against “Joker,” “1917,” “Little Women” and “Marriage Story.” Even though John Williams‘ iconic themes and anthems return in Episode IX, the music branch of the academy deemed it to have enough original music to compete at the Oscars. Williams is a five-time Academy Award winner who’s been nominated a record 52 times now including for five previous “Star Wars” films, winning for “A New Hope” (1977). Williams’ biggest Oscar rival may be Hildur Gudnadottir, who’s coming off two big wins at the Golden Globes and Critics’ Choice Awards for scoring “Joker.”

In the race for Best Sound Editing, “The Rise of Skywalker’s” co-nominees are “1917,” “Ford v Ferrari,” “Once Upon a Time in Hollywood” and “Joker.” Oftentimes the loudest or most musical films win the sound prizes, including last year’s champ “Bohemian Rhapsody.” Luckily for “Star Wars,” it’s filled with noisy space explosions, light saber fights and ocean battles, all of which could help it take the edge over the competition. However, our early racetrack odds favor a war movie (“1917”) and a race car film (“Ford v Ferrari”) to prevail.

As Oscar pundits are keenly aware, Best Visual Effects usually goes to a Best Picture nominee, which doesn’t bode well for “Star Wars” as it’s not competing there. However, since two Best Picture nominees are nominated this year (“The Irishman” and “1917”), is it possible they’ll split the vote? The other nominees are “Avengers: Endgame” and “The Lion King.” In “Star Wars'” favor is the fact that the artisans had the added challenge of incorporating Princess Leia in the film after the unfortunate passing of Carrie Fisher.

Here’s a look at how the first eight “Star Wars” saga episodes did at the Oscars. While all of the films reaped at least one nomination, the last to take home a competitive trophy was the second in the series, “The Empire Strikes Back” (1980).