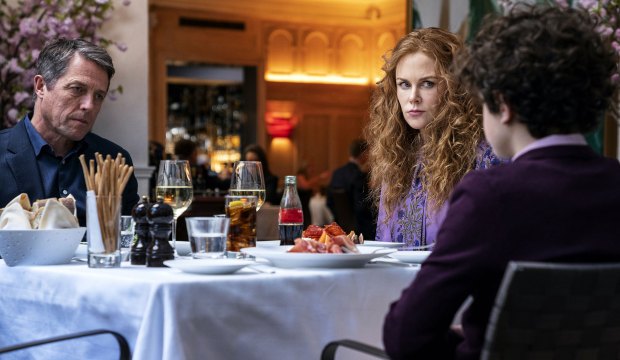 Nobody loves Nicole Kidman quite like the Hollywood Foreign Press Association: she has received a staggering 14 Golden Globe nominations over the last three decades. With Kidman’s latest HBO series, “The Undoing,” which bowed October 26 to good numbers, it seems a foregone conclusion that Kidman will once again see herself in contention.

Early Globe victories for Kidman came for lead performances in the films “To Die For” (1995), “Moulin Rouge!” (2001) and “The Hours” (2002), the last of which also brought the Australian her first Best Actress Oscar. Kidman’s career rose to yet another level years later when she starred in the 2017 HBO miniseries “Big Little Lies.” Her performance as abused wife Celeste Knight aroused feminist passions during the #MeToo era, and she easily won not only the Globe for Best TV Movie/Limited Series Actress but also the Emmy and SAG Awards. Kidman was nominated again last year for the same role in the show’s second season but lost to Olivia Colman for “The Crown.”

Now she’s back in another limited series mystery. In the six-episode “Undoing,” she plays Grace Fraser, a glamorous and successful Manhattan shrink whose white-privileged life derails like a New York City subway train when her husband, oncologist Jonathan Fraser (Hugh Grant), vanishes on the same day the mother of their son’s classmate is found murdered. What a coincidence!

“The Undoing” was produced and written by David E. Kelley, Kidman’s guiding light on both seasons of “BLL” and her next series, “Nine Perfect Strangers,” which is currently in production. In his long career, Kelley has won an astonishing eight Globes, for everything from “BLL” to “L.A. Law.” At his golden peak, he won Best Drama Series (“The Practice”) and Best Comedy Series (“Ally McBeal”) in the same year, 1999.

As with Kidman, “Big Little Lies” revived Kelley’s career. So if “The Undoing” continues to draw viewers, there’s no reason to think it won’t score a nomination for Best TV Movie/Limited Series. As usual, it’s a competitive field, but the show’s recent premiere may ensure that it resonates with voters. Gold Derby Experts currently give “The Undoing” 5/1 odds, putting it in fourth place behind “Unorthodox,” “Mrs. America” and “Normal People,” all of which aired during the spring and will be a relatively distant memory next year when it comes to the final voting. (The Golden Globes will air on February 28, 2021.)

As for the stars of “The Undoing,” Gold Derby Experts give Kidman 11/2 odds, placing her fourth among the top five projected nominees. She has stiff competition from Shira Haas (“Unorthodox”), who is currently favored to win; Cate Blanchett (“Mrs. America”); Cynthia Erivo (“Genius: Aretha”); and triple-threat Michaela Coel, who is the writer, producer and star of HBO’s “I May Destroy You.”

The slightly better standing belongs to Grant, who has 9/2 odds and places fourth in the lead actor category behind this year’s Emmy winner Mark Ruffalo (“I Know This Much is True”), Ethan Hawke (“The Good Lord Bird”) and Paul Mescal (“Normal People”). Grant has been nominated five times for a Golden Globe, winning in 1995 as Best Film Comedy/Musical Actor for “Four Weddings and a Funeral.” Could the trio of Globe winners Grant, Kidman and Kelley sweep?