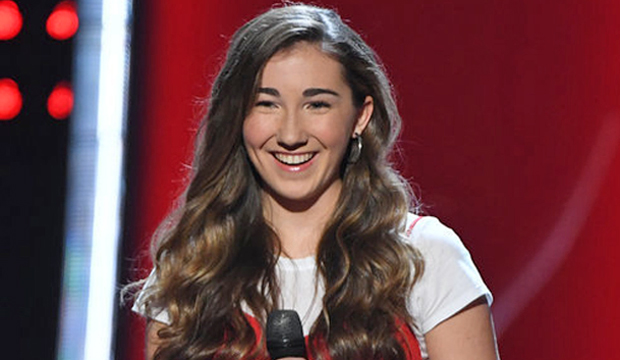 Last week’s results episode of “The Voice” was a bloodbath as no less than four artists said goodbye: Allegra Miles of Team Nick Jonas, Joanna Serenko of Team Blake Shelton, Zan Fiskum of Team John Legend and Megan Danielle of Team Kelly Clarkson. Of this unfortunate quartet, who was robbed of a spot in the finals? “The Voice” fans have been voting all week in our recent poll, and the results are in! A whopping 52% say Allegra’s journey was cut short the most, followed by 20% for Joanna, 16% for Zan and 12% for Megan. Do you agree or disagree with those poll results? Sound off down in the comments section.

During the Top 9 performance show, Allegra took on “Overjoyed” as her dedication song. Unfortunately, America didn’t connect with her as much as they did with Team Nick’s other singer Thunderstorm Artis, whose “Home” cover earned him a spot in the finals. Allegra then faced off in the live instant save, singing “In My Blood,” against on-the-bubble artists Joanna, Zan, Megan and Toneisha Harris. The social media fans voted to save Toneisha of Team Blake, so the other four were sent packing.

“Allegra, I have so enjoyed every step of this journey with you,” Nick told the 16-year-old Florida artist before host Carson Daly read the results. “This has been a really unique season and all of us have had to make major adjustments and figure out how to do it in this way. You have stepped up and found a way to rally the family around you, which is such a beautiful thing, to make this an unforgettable journey for yourself and for the audience at home. Just know that I am so proud to have had the chance to work with you. I think the sky’s the limit for you. Whatever step of the journey from here, I would be happy to be of any assistance I can be and watch you shine.”

What was your favorite Allegra performance on “The Voice”? Her song list consisted of “Use Somebody” (blinds), “How Will I Know” (battles), “Chandelier” (knockouts), “New York State of Mind” (playoffs), “Overjoyed” (Top 9) and “In My Blood” (instant save).

Besides Thunderstorm and Toneisha, the other contestants still in the running to win Season 18 of “The Voice” are Todd Tilghman (Team Blake), Micah Iverson (Team Kelly) and CammWess (Team Legend). Who do YOU think will prevail on Tuesday, May 19?