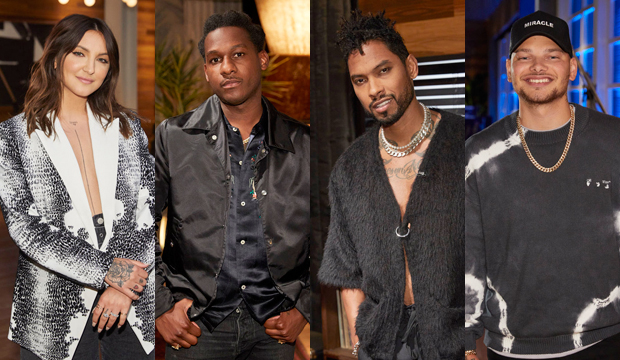 Can you feel the jitters? The Top 40 artists on “The Voice” Season 19 are nervously gearing up for the battle rounds, which begin Monday, November 9 on NBC. That’s when each coach will split up their artists into five pairs, who’ll then perform a song on the big stage. But they won’t be in this alone. Four superstar battle advisors have been announced to help out the contestants on their reality TV journeys. They are: Julia Michaels for Team Gwen Stefani, Leon Bridges for Team Kelly Clarkson, Miguel for Team John Legend and Kane Brown for Team Blake Shelton.

SEEDid ‘The Voice’ save best for last? Team Legend’s James Pyle could become the next Chris Blue

Julia Michaels is no stranger to “The Voice,” having been an advisor for Team Adam Levine in Season 14. The singer-songwriter is perhaps best known for her solo single “Issues,” which was nominated for Song of the Year at the 2018 Grammy Awards. Michaels also earned a Best New Artist bid that year, losing to Alessia Cara.

Leon Bridges, a soul singer who rose to fame thanks to his debut album “Coming Home,” is making his first appearance on “The Voice.” He’s a four-time Grammy nominee who took home the trophy in Best Traditional R&B Performance for “Bet Ain’t Worth the Hand” (2019).

Miguel, like Michaels, is also returning as a “Voice” advisor after previously helping out a different coach — in his case, Team CeeLo Green in Season 5. “All I Want Is You,” Miguel’s debut album, was released in 2010 and he’s been a commercial success ever since. He won a Grammy in Best R&B Song for “Adorn” (2013) and claimed two BET Awards: Best Male R&B Artist and Best Collaboration with Wale for “Lotus Flower Bomb.”

Kane Brown’s self-titled album was released in 2016 after the artist initially rose to fame via social media. He’s dominated many of the awards shows over the past few years, winning CMT Music Awards in Collaborative Video of the Year for “What Ifs” (2018) and Male Video of the Year for “Lose It” (2019), and taking home American Music Awards for Favorite Country Male Artist, Album and Song (2018) and Favorite Country Male Artist (2019).