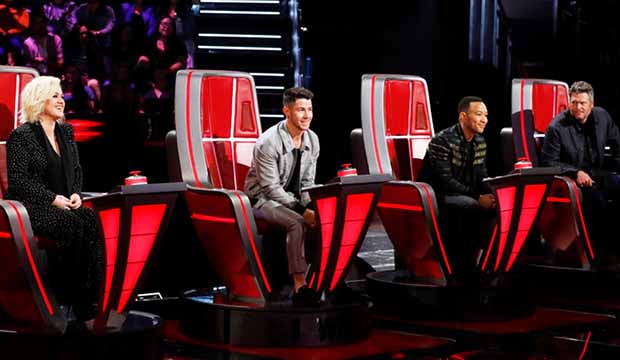 The Battle Rounds will begin Night 1 on Monday, March 23, with teammates facing off in hopes of advancing to the Knockouts. Advisors for the coaches this round will be Dua Lipa for Team Kelly, Kevin Jonas and Joe Jonas for Team Nick, Ella Mai for Team Legend and Bebe Rexha for Team Blake. The coaches will be able to steal one losing artist from other coaches and save one losing artist on their own team. However, the team coach may only hit their button to save an artist once it is clear that no other coach is going to steal them.

Enjoy reading our power rankings and see photos for each team by clicking their names:

And enjoy revisiting our live blogs from each of the blind audition episodes from the past few weeks:

We continue our tradition of an updating live blog below with a minute-by-minute recap of this two-hour episode on NBC. Here is our rundown for Monday, March 23:

8:01 p.m. – Prior to the start of the battles, the coaches huddled up to discuss the new rule changes: a save can’t be used until it’s clear another coach won’t steal and then the four saves will have a performance episode where only one of them is put through.

8:02 p.m. – The first battle of the season was from Team Blake with mentor Bebe in the house. They gave Joei Fulco and Todd Tilghman the Tina Turner song “The Best,” a song that was in the classic rock lane of both artists. Bebe noticed they both have high voices and that they’d need to work on the blending of their vocals in order for it to work in their favor. In the battle they both exuded the energy of Tina’s uptempo ballad, but Todd stole the show with his rich tone and wide range. Overall the coaches found the performance really fun and they seemed split over who should take the win. But in that regard all that mattered was what Blake thought and he decided to “roll the dice” on Joei!

8:12 p.m. – And yet that wasn’t it for Todd because just in the last second Kelly tried to hit her button to steal him right, but she waited too long because he was already off the stage which meant that he was available for Blake to save him instead! He’ll head to the four-way knockout to try to win his way back.

8:15 p.m. – Kelly surprised her first battle artists by bringing in mentor Dua after breaking it to Anaya Cheyenne and Chelle that they’d be singing her song “Scared to Be Lonely.” The ad-libs sections of the song were a concern of Kelly’s, but Dua told them that they can fill them with whatever feels comfortable. For Kelly, she wanted to see who could “carry the attitude,” but also show the vulnerability of the song.

8:27 p.m. – In their performance, Anaya was most in the groove of the song’s vibe, but Chelle was hitting the vocal powerfully and with some unexpected grit. Blake pointed out that Anaya can impressively navigate the song through different aspects of her voice and John agreed with him that Chelle kind of lost control over her vocal in moments. For Kelly it came down to the artist that pushed themselves the most with confidence and for her that artist was Anaya!

8:39 p.m. – For Nick’s first battle (ever!) he gave Roderick Chambers and Joanna Serenko the Billie Eilish balled “When the Party’s Over” with his brothers offering mentorship during rehearsal. Together they wanted the artists to let the song breathe before transitioning it into something bigger and unexpected in the tail end.

8:46 p.m. – As suggested by Nick in rehearsal, Roderick and Joanna began their performance back to back for dramatic effect. It brought new depth to the song and did wonders to make the track feel new, especially once they raised their tones and made it all bigger. In their thoughts, the coaches thought the two of them were in sync, but Blake gave the edge to Roderick for “shock factor” and John was impressed by Joanna’s range.

8:56 p.m. – When it came to decision time, Nick went with the more surprising choice in Roderick! But John didn’t let Joanna go home, choosing to use his one steal to bring her over to his team.

8:58 p.m. – For his first battle of the season John brought together Mike Jerel and Zach Day for some mentorship by Ella as they worked through the Miguel song “Adorn.” With this song John wanted to test their range and each of their abilities to do long runs. Ella noticed that this could be a difficult one for the guys to manage between them because of their different energies, but noted that they both have great voices that will make it a tough choice for John.

9:08 p.m. – Despite them both having great voices, this was one of the weaker battles of the night because they both performed it independently without ever bringing it together to gel as one. Mike was a more natural fit for the song while Zach played around with it a little more. Blake thought that Zach “kicked the door down,” but cautioned John to choose the artist that fits best into his vision for his team. John though they both delivered the song “convincingly” and ultimately made the decision based on their tone that appeals to him more… he stuck with Mike!

9:21 p.m. – Levi Watkins and Jamal Corrie weren’t surprised when they were paired for a battle because of their similar styles. Blake and Bebe sat with them to rehearse “Counting Stars” by OneRepublic, a song that Blake thought would be perfect for their pop-rock voices. Bebe worked with Levi to push his range higher, noticing that his voice hasn’t fully matured. That was intimidating for him being paired against Jamal who already is in full control of his range. But Blake and Bebe were impressed with his ability to stretch his voice and loved the crack that came with it.

9:30 p.m. – Their performance had lit energy despite them both seeming quite nervous on the big stage. While Jamal’s pitch was off in parts the times that he hit the notes right sounded really, really good and Levi was able to make his low range work for the song. John was surprised that Levi managed to get through it without messing up and in advising Blake to choose him he and Nick both acknowledged that they missed out on not turning their chairs for him originally. Kelly put up a fight for Jamal who she thought had more passion that should supersede perfection. Blake thought that if Jamal hadn’t had the pitch issues tonight that it’d be a different story, but as things stood he had to go with Levi!

9:41 p.m. – Team Nick got the final battle of the night between Michael Williams and Allegra Miles. Nick decided to give them the Sam Smith version of Whitney Houston‘s “How Will I Know” in order to push them to show vulnerability in the song. Both Joe and Kevin were impressed by their harmonizing, but advised that they learn to be okay with starting small so that the big notes have more power.

9:53 p.m. – The chemistry between Allegra and Michael was as palpable in their performance as the Jonas Brothers thought it was during rehearsal. Though they have different tones and ranges, both artists hit their mark and found a way to bring them together in the harmonies. Michael’s solo moments got strong reactions from the coaches–Kelly was impressed with his falsetto and John likened him to Nick. That being said, Kelly advised Nick to choose Allegra for her tone and Blake agreed, calling her unique. Nick thought their performance together was magical, but he made his decision on a gut feeling to keep Allegra! But he wasn’t kidding when he said it would be a tough decision for him because he used his save on Michael!