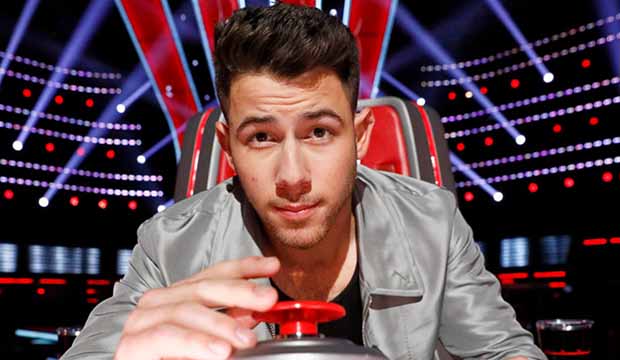 NBC welcomes Nick Jonas as the newest coach for Season 18 of “The Voice” on Monday evening. He replaces Gwen Stefani and joins six-time champ Blake Shelton, one-time coaching winner John Legend and reigning champ Kelly Clarkson, who picked up her third victory this past December.

Blind auditions begin Monday and continue for the next six episodes. Follow along with our updating live blog throughout the season as we provide instant commentary about each performer and song.

When battle rounds start, look for the following special advisors for each coach:

And now here we go with our live blog for Monday, February 24:

8:00 p.m. — Kelly and John both became winning coaches with their first attempt — will Nick Jonas enjoy the same beginner’s luck? We’ll find out in a few months, but first the coaches need to assemble their teams. The blind auditions for Season 18 begin now! Let’s get started.

8:15 p.m. — The first artist of Season 18 is Todd Tilghman auditioning with “We’ve Got Tonight.” He’s got a rich, husky voice just like the original singer, Kenny Rogers. Blake, Nick and Kelly quickly turn their chairs while John continues to ponder. Finally John caves and we’ve got our first four-chair turn of the season. Kelly is in love with Todd, who looks like an average 41-year old guy off the street wearing a sweater and jeans. He’s got eight kids at home and jokes that he needs to win this badly! He’s never performed for an audience before, he’s simply a church singer and pastor. Todd has an infectious energy and the coaches are clamoring to work with him, but he chooses to join Team Blake!

8:25 p.m. — Our second singer is Nelson Cade III, a 27-year old musician who once shared the stage with Stevie Wonder. He’s got a sharp style about him and within seconds of beginning his performance of “Pride and Joy” John turns his chair. Kelly soon follows suit as does Nick who quickly realizes he’s been blocked! Blake makes this another four-chair turn and we’re off to a great start! Nelson plays guitar and looks completely comfortable on stage. You can tell he’s a seasoned performer with a good voice. At the conclusion of the performance we learn it was John who decided to block Nick. John loves the “golden, honey-dipped” sound of Nelson’s voice and it’s no shock that Nelson chooses to join Team Legend.

8:35 p.m. — Kelly’s praying for a country female artist, but it’s not meant to be. The next artist to audition is a 16-year old named Tate Brusa who is a Jonas Brothers fan from Utah. Is he destined for Team Nick? He was inspired by Coldplay and U2 and this young songwriter is ready to hit the stage. Performing “Perfect,” Tate shows off his guitar playing abilities and pure, innocent-sounding vocals. The judges are more hesitant to turn around for this young vocalist, but right before the audition is over Nick and Blake turn their chairs. John fully endorses Nick as Tate’s coach while Kelly is more diplomatic. Nick refuses to accept another defeat and leaps up on stage to give Tate an impromptu lesson. To that, Blake brings out a puppy and threatens to send it back to the animal shelter if Tate doesn’t choose him. The threat doesn’t work and Tate becomes the first ever member of Team Nick! Hopefully little “Snowflake,” the golden retriever, will find a home soon.

8:50 p.m. — Up next is Tayler Green, a 27-year old singer from Los Angeles (by way of New Jersey) who works in her brother’s luxury shoe repair store. She’s been writing music since the age of 14 but her pursuit of a music career has been a struggle. Tonight Tayler is singing “Issues,” which she has rearranged to show off her artistry. Tayler’s personalized vocal arrangement instantly earns a chair turn from Kelly who quickly leaps to her feet for the rest of the performance. Nick follows suit and we’ve got a two-chair turn. After a fierce debate between Nick and Kelly, Tayler finally decides to join Team Kelly and each coach now has one artist on their team.

9:00 p.m. — The next singer to take the stage tonight is Ashley Plath, a full-time meter reader who has a side gig as a musician in the duo Nick & Ashley. She collects data for the electric company so they know how much to charge for utilities. This is her first time going on stage as a solo artist, but she’s following her dream. To show her eclectic taste, Ashley is singing “Baby It’s You,” a classic from the 1960’s she’s putting her own spin on. She has a sexy, rock and roll vibe but is a little shouty. Her inconsistent vocals get no chair turns and sadly Ashley is heading home early.

9:10 p.m. — Darious Lyles is a Chicago church singer whose father is a pastor. At the age of 18, Darious was shocked to find out he was adopted and after he confronted his parents they confirmed it was true. He has now reconnected with his biological mother who has accompanied him to “The Voice.” It’s especially meaningful because both of Darious’ adoptive parents have passed away in the last four years. He’s singing “How Do You Sleep” in their honor and John and Kelly instantly turn around when they hear his smooth, effortless R&B vocals. Despite a consistent performance, Nick and Blake aren’t swayed and we’ve got a two-chair turn. Kelly is struck by the way in which his vocal runs go up instead of down, a unique style she compares to Whitney Houston‘s. Despite that lovely compliment, Darious chooses to join Team Legend.

9:20 p.m. — We’ve got our first country artist of the night with Meghan Danielle, a 17-year old waitress from Georgia who has performed at a few open mic nights, but this is by far the biggest stage she’s been on. She’s singing “Remedy,” and definitely has a pop/country crossover voice with some solid vocal runs and range. Kelly is the only coach to turn her chair and looks thrilled by the freebie she’s just won. Meghan says Kelly was always her first choice, but she’s disappointed Blake didn’t turn around. Nevertheless, Team Kelly has another team member.

9:30 p.m. — An enthusiastic Chrissy Joly is next to audition. She was initially inspired by her father and her mother reminisces about Chrissy’s childhood obsession with The Spice Girls. In her late teens her father left their family and started a new one in another city. Despite hard times, Chrissy cares for both her parents and hopes to do them proud. She’s singing “Don’t Let Me Down,” and she starts off a bit shaky and seems a little out of the pocket, but when she hits the chorus she shows nice range and grit. Despite her best efforts, none of the coaches turn around and Kelly can be heard saying, “She’s just too pitchy.”

9:40 p.m. — We’ve got a truly blind audition happening that even viewers at home can’t see. It’s a male rock vocalist with incredible range and once John hits his buzzer first, the artist is revealed to be Todd Michael Hall singing “Juke Box Hero.” This guy is a classic rocker who will be a fun element to the season. Finally, Blake can’t take it anymore and turns his chair as well, but Kelly and Nick refused to bite. Todd is 50 years young and still looks hip so it will be interesting to see this story unfold. Blake and John both give high praise to Todd but he ultimately joins Team Blake.

9:50 p.m. — 16-year old Emily Bass has returned after getting zero chair turns last season. She’s a sketch artist who provided each of the coaches last year with a sketch of themselves. She’s back with a sketch of Nick in hopes he might turn his chair for her since none of the others did last season. Emily is singing “Love Yourself” hoping it will show of more of her range but once again her dream is crushed as nobody turns for the second time. Oh well, at least she got to give Nick her drawing.

9:59 p.m. — It’s time for the last audition of the night and we’ve already been shown that we’re in for an epic four-chair throw down. We learn the mystery artist is Joanna Serenko, an 18-year old from St. Louis who plays at a local music pub the likes of Ed Sheeran and John Legend himself have played at. She’s inspired by older music and tonight she’s singing “All My Loving.” She’s got a jazzy inflection to her voice and almost instantly gets the attention of Kelly, John and Nick who all turn around. Blake soon follows suit and prepare for shots to be fired as they fight over this one. Blake says he can’t remember such an effortless, powerful vocal which I personally think is quite an overstatement. The coaches are floored by her age and impressed by the way she is able to dance around the notes. While Joanna begins to think over her decision, Nick stops her and begs her to join his team. He doesn’t want to throw in the towel and let John walk away with it and his strategy works! Joanna joins Team Nick and gives him his first win on a four-chair turn. That’s a wrap for tonight!