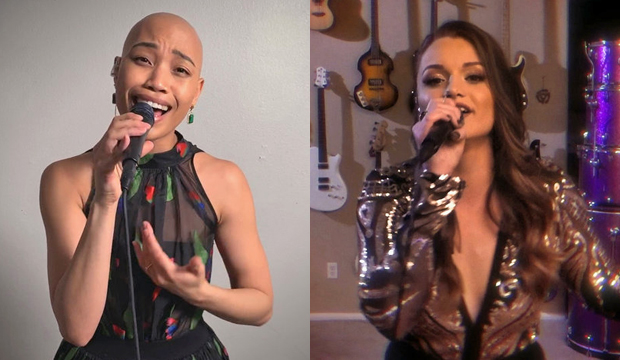 Last week “The Voice” experienced one of the biggest mass eliminations ever when NBC’s reality TV show said goodbye to a whopping eight artists. In our recent poll we asked “The Voice” viewers which of the eliminated contestants was most “robbed” of a spot in the Top 9, and the results are in: it’s a tie! Cedrice of Team Kelly Clarkson and Joei Fulco of Team Blake Shelton both came in with leading 21% support (see poll results below). Do you agree or disagree with your fellow “The Voice” fans? Sound off down in the comments section.

SEE ‘The Voice’ Coaches Ranked Worst To Best: All 14 From Gwen To Blake

Cedrice (28) from San Diego, California had whirlwind experience on “The Voice” as she appeared on no less than three different teams. She was initially scooped up by John Legend in the blind auditions thanks to her “Fever” cover. John quickly kicked her to the curb during the battles, which is where Blake stole her following her rendition of “Stay.” In the knockouts, Blake didn’t love her “Love on the Brain” performance, so Kelly was able to acquire the so-called “goddess” for her team.

In the live playoffs Cedrice numbered among the Top 17 where she took on “Everything I Wanted” for Team Kelly. While America didn’t vote for her in droves, she did receive enough support to make it to the live instant save. Alas, Cedrice’s performance of “breathin” lost out to Team Blake’s Joanna Serenko (she sang “Don’t Let Me Be Lonely Tonight”) and Cedrice was sent packing.

Joei (22) from Lancaster, California had a wholly different “The Voice” trajectory as she joined Team Blake in the blind auditions and remained there throughout the entire competition. Her song list included such classics as “Gypsys, Tramps & Thieves” (blinds), “The Best” (battles), “When Will I Be Loved” (knockouts) and “Runaway” (playoffs). She didn’t receive enough overnight votes to advance to the Top 9, nor was she asked to compete in the live instant save, so Joei’s journey came to an end early during the results show.

Here are the complete poll results for who our “Voice” readers think was most “robbed” of a spot in the Top 9:

SEEexclusive predictions: Who will win ‘The Voice’?
MAKE YOUR PREDICTION: Who will win 'The Voice'?
To save your prediction, you must log in to Gold Derby. Click here to sign in with existing account -- or create a new one.