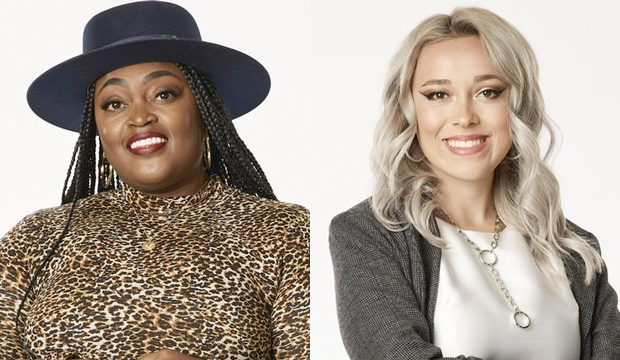 Hey, Blake Shelton: Kelly Clarkson is coming for your title on “The Voice”! To date, Blake has coached a leading seven artists to victory out of his 18 total seasons, but that’s only a 39% success rate. Conversely, Kelly is at three wins out of her five seasons, a 60% success rate. She’s trying hard to narrow the gap between their numbers, and could take a step closer if one of her Season 19 semi-finalists — Desz or Cami Clune — ends up winning the competition. Who do you think has a better chance of making it happen? Vote in our poll below.

Kelly joined up with the show full-time during the 14th edition and immediately proved her worth as a coach. She prevailed with artists Brynn Cartelli (Season 14), Chevel Shepherd (Season 15) and Jake Hoot (Season 17), only losing the 16th cycle to John Legend and the 18th installment to Blake. (See “The Voice” winners list.)

Desz started the show as a four-chair turn after her blind audition of “Un-Break My Heart,” ultimately choosing to join Team Kelly. She next performed “If You Don’t Know Me by Now” in the battles and “Can We Talk” in the knockouts, where she cemented herself as one of Kelly’s strongest contenders. In the live playoffs Desz took on “What’s Love Got to Do with It” and was America’s choice to advance to the Top 9.

Cami Clune was also a four-chair turn artist, though she had a much different journey, joining Team John Legend after her “Skinny Love” cover. She sailed through the battles with “Wicked Game.” However, in the knockouts, her “I Put A Spell On You” rendition didn’t win over John and she was eliminated, which is when Kelly swooped in to steal her. Kelly then saved her in the live playoffs following her take on “Never Tear Us Apart.”

What do you think, “Voice” fans? Does Desz or Cami have a better shot of winning for Team Kelly, or will this season’s victory go to another coach? After voting in our poll, defend your choice down in the comments section.