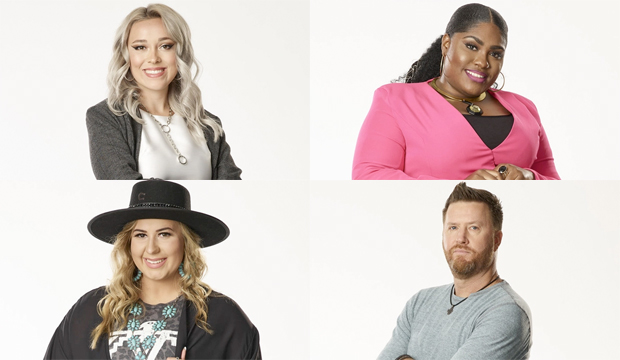 At long last, “The Voice” announced its Top 5 finalists for Season 19 during Tuesday’s results show: Ian Flanigan, Jim Ranger, John Holiday, Carter Rubin and Desz. These talented artists will next be seen in the two-night finale, scheduled for Monday, December 14 (performance show) and Tuesday, December 15 (results show). But what about the four who were eliminated? Sadly, there wasn’t enough room for Cami Clune, Tamara Jade, Bailey Rae and Ben Allen in NBC’s reality TV competition and they were all sent packing. From this group, who do you think was most robbed? Vote in our poll below.

Cami Clune started out as a four-chair turn, choosing to join Team John Legend following her blind audition of “Skinny Love.” She next performed “Wicked Game” in the battles and “I Put A Spell On You” in the knockouts, where she eliminated. That’s when Kelly Clarkson swooped in to steal her and helped to mentor her during the live shows. Cami took on “Never Tear Us Apart” in the Top 17 (being Kelly’s final “save” to advance) and “The Joke” in the Top 9 (where she lost the instant save).

Tamara Jade, a former backup singer to Lizzo, was the first artist to grace the stage in Season 19, picking Team Legend after all four coaches turned their chairs around. In the next rounds she took on “Hard Place” (battles) and “Higher Ground” (knockouts), easily advancing to the live shows. Tamara was John’s final “save” during Top 17 week following her “Crazy” cover, and she most recently performed “Let It Be” in the Top 9 before losing the instant save to Ian.

Bailey Rae was one of the last artists to take part in the blind auditions, when half the teams were already full. John turned his chair for her rendition of “Does My Ring Burn Your Finger” and she officially became his first country artist ever. She then performed “Tennessee Whiskey” in the battles and “Let Me Down Easy” in the knockouts. Bailey was in danger of going home after her live cover of “Sweet Music Man,” but America instantly saved her. The celebration didn’t last long as she was cut in Top 9 week after singing “Georgia On My Mind.”

Ben Allen’s “Red Dirt Road” blind audition wowed three of the coaches, with the country artist choosing to be on Team Blake Shelton. He remained a member of Blake’s team for the battles (“Free”) and the knockouts (“She Got the Best of Me”), but that’s when Blake cut the cord. Thankfully Gwen Stefani was there to steal him. She again saved him during Top 17 week after he performed “There Goes My Life.” Unfortunately, his Top 9 cover of “All About Tonight” was the end of the road for Ben.