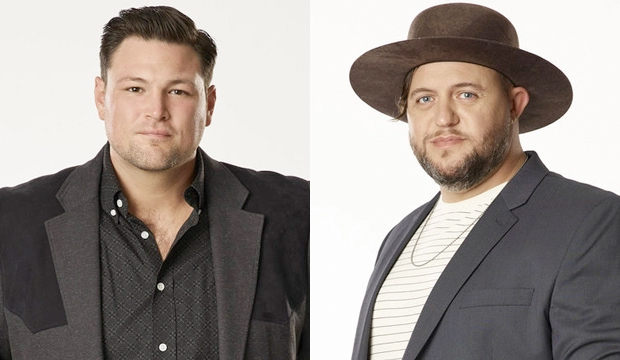 As the only coach who’s been with “The Voice” since day one, Blake Shelton understandably has more victories than anyone else. To date he’s helped mentor seven champions across the finish line, including singing preacher Todd Tilghman last spring. (See “The Voice” winners list.) With Season 19 now gearing up for the semi-finals, will either of Team Blake’s artists — Ian Flanigan or Jim Ranger — become his record eighth winner? Vote in our poll below.

After Adam Levine claimed the inaugural Season 1 title with Javier Colon, Blake rebounded by winning three in a row: Jermaine Paul (Season 2), Cassadee Pope (Season 3) and Danielle Bradbery (Season 4). His next victories were with Craig Wayne Boyd (Season 7), Sundance Head (Season 11) and Chloe Kohanski (Season 13). Blake then had a four-season losing streak that was finally broken recently with Todd Tilghman.

Ian Flanigan’s voice is instantly recognizable for its low register and classic country twang. He surprisingly was a one-chair turn in the blind auditions with his cover of “Colder Weather.” Ian then performed “Have You Ever Seen the Rain?” in the battles and “Beautiful Crazy” in the knockouts. In the first live show this Saugerties, New York native took on “Make You Feel My Love” and was America’s choice to advance to the Top 9.

Jim Ranger has a more bluegrass/Americana style to his voice, with Blake predicting for weeks he’ll make it all the way to the finale. This Bakersfield, California resident sang “Blue Ain’t Your Color” for his blind audition and ended up choosing Team Blake over Team John Legend and Team Gwen Stefani. “Good as You” was his battle song, “Humble and Kind” was his knockout choice and “Rumor” was his live playoff tune. After America voted to advance Ian to the Top 9, Blake used his final save to keep Jim in the competition.

What do you think, “Voice” fans? Does Ian or Jim have a better shot of winning for Team Blake, or will this season’s victory go to another coach? After voting in our poll, defend your choice down in the comments section.