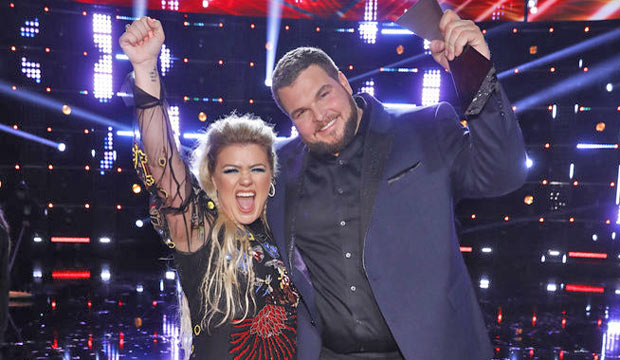 Just one season after winning “The Voice” with country artist Jake Hoot, coach Kelly Clarkson is having a heck of a time convincing any male artists to join her Season 18 team. In fact, after four blind audition episodes Kelly has acquired only eight female artists with two spots still to be filled. (See Kelly’s Season 18 team.) “I have all girls,” Kelly declared about her artists during Monday’s fourth episode. Fellow coaches Blake Shelton, John Legend and Nick Jonas have teams made up of both genders, with John earning his first female artist (Zan Fiskum) this week.

The fact that Kelly is a three-time “Voice” champion makes her difficulties in convincing guys to join her team even more of a head-scratcher. She’s only been a coach on NBC’s reality TV show for four previous cycles, and she prevailed with Brynn Cartelli (Season 14), Chevel Shepherd (Season 15) and Jake Hoot (Season 17).

As it turns out, the Season 18 blind auditions that are airing now on NBC were actually filmed before Kelly proved victorious with Jake last December. In other words, Kelly wasn’t able to use that fact to her advantage while trying to woo artists onto her current team. She did, however, make a savvy pitch to Mike Jerel during Monday’s episode — one that didn’t end up working out in her favor.

“Just so you know, every pianist that also sings that comes out here is gonna be on his team,” Kelly said about John, who rolled his eyes in response. “I’m just saying, Mike, if you want to stand out, I ain’t got any males on my team. Ain’t nobody playing the piano. It’s an open lane, Mike.” Ultimately, Mike ignored her advice and chose to join Team Legend, where he’ll no doubt blend in with the other artists who have similar styles and voices.