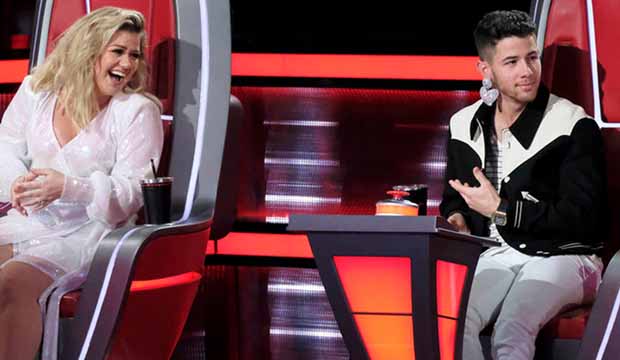 It’s the final night for “The Voice” Knockouts of Season 18! Coaches John Legend and Blake Shelton have each used their one and only steal for this round. How will rivals Kelly Clarkson and Nick Jonas deploy their steals Monday night?

In addition to the six regular Knockout pairings, the four saved artist from the previous Battle episodes will compete for one slot in the live shows, which will premiere at an unknown future date due to health concerns. That will give the audience a Top 17 since each coach will carry forward four artists from these two Knockout shows that were already pre-recorded months ago.

The singers competing for this unconventional 17th slot are:

The advisor for all teams in this round is legendary, Grammy-winning singer-songwriter, James Taylor.

And now follow along with live updating blog below for the Night 2 episode on Monday, April 20. Keep refreshing for the latest recap details and be sure to make your comments below.

8:15 p.m. — The first Knockout of the night is Thunderstorm Artis vs. Mandi Castillo. Both of them were four-chair turns and although Thunderstorm seems like an early front-runner, Kelly has had her eye on stealing Mandi. Mandi is singing “Stand By Me” by Ben E. King in honor of a friend of hers who is fighting cancer. Thunderstorm is singing his coach’s song, “Preach.” Before the performances, Legend asks the other coaches to be honest with their thoughts because he’s not sure who he’s picking. Mandi is up first and I find her voice a bit shaky on this ballad, but Kelly is giving her a standing ovation. When Thunderstorm takes the stage it just feels like there’s an instant excitement in the building. He’s so original and effortless when he performs it feels like the music just flows from him. Nick preferred Thunderstorm, but Kelly and Blake both thought Mandi won this! But it’s John’s choice and he chose Mandi as the winner of this Knockout! Wow! That’s shocking to me. Did John just drop the winner of this show? Nick ends up stealing Thunderstorm and Team Jonas just hit the jackpot!

8:35 p.m. — The second Knockout is Team Nick’s Arei Moon vs. Jon Mullins (stolen from Team Blake). Arei is singing “You Don’t Know My Name” by Alicia Keys in honor of her husband. This is my favorite song from Keys so I hope she nails it. Jon is singing “Thinking Out Loud” by Ed Sheeran because it speaks to what is going on in his life right now. Arei is up first and her stage presence continues to surprise me, she just lights up the stage. I love the way she performs and she sounds fantastic and has Kelly screaming, “Get it!” Jon is up next and he also sounds great, with his voice just powering through this ballad. He sways a little off key at the modulation, but this will be a tough decision for Nick. Kelly liked Arei better, but Blake prefers Jon. Nick struggles to decide, but ultimately decides Arei is the winner of this Knockout. Jon has been eliminated from the competition.

9:00 p.m. — The third Knockout tonight is Team Kelly’s Tayler Green vs. Micah Iverson. Micah is singing “Graveyard” by Halsey, which is a little outside of his wheelhouse but he wants to push himself. Tayler is singing “Time After Time” by Cyndi Lauper because it’s a classic song that reminds her of her encouraging family. Micah is up first and I’m impressed with his ability to sound this good on such a wordy song. I also like the darker arrangement he and Kelly came up with for this performance. Tayler is up next and she’s sort of flown under the radar this season, but I’m loving this. She sounds better than ever and the little breaks in her voice give it so much emotion. I thought Micah was a heavy favorite, but Tayler just got a standing ovation! The coaches seem to be leaning towards Tayler, but Kelly defends Micah by saying his song was incredibly difficult to sing. So who won this Knockout? Kelly chooses Micah and sadly Tayler just got eliminated from the competition. At least she left on a high note.

9:15 p.m. — The fourth Knockout is Team Nick’s Allegra Miles vs. Jacob Miller. Jacob has chosen “Better Now” by Post Malone. Although it’s not something he would play, it’s accessible to a general audience and he can put his own spin on it. Allegra has decided to sing “Chandelier” by Sia. She connects to the song because Allegra has gone through depression throughout her teenage years. Allegra is up first and she’s got a really cool, indie voice and even though she seems behind the beat sometimes, I love the way she sings. I think she could be a horse to win this season. Jacob is up next and I love his guitar intro, but his overall delivery of this song is a little to vanilla for my taste. I have to go with Allegra on this, but what does Nick think? Allegra has won this Knockout and Jacob was eliminated from the competition.

9:20 p.m. — As the Knockouts continued Team Kelly’s Mandi Thomas gave an electrifying performance took out Anaya Cheyenne. Only a snippet of Mandi’s performance of “My Church” by Maren Morris was shown and we didn’t get to see Anaya sing at all.

9:35 p.m. — The next Knockout is an epic battle of two powerhouse divas from Team Blake: Cedrice vs. Toneisha Harris. Both of them have chosen Rihanna songs and Blake has decided if they want to go down that similar path, it was best to pair them together now and go with his best choice. Cedrice will sing “Love on the Brain” while Toneisha takes on “Diamonds.” In rehearsals, Toneisha got the top compliments from James Taylor, who said she’s the best vocalist in the competition and he compares her to Barbra Streisand and Aretha Franklin. What an endorsement! Cedrice is up first and she’s just so magnetic on stage it’s hard to take your eyes off her. Next is Toneisha and her voice is just on another level. Cedrice has such a striking presence, but Toneisha’s voice is ridiculous and this is called “The Voice.” Toneisha would be my pick, but who does Blake want to move forward with? The winner of this Knockout is Toneisha, but Kelly steals Cedrice and will become her third coach!

9:45 p.m. — It’s time for the first ever four-way Knockout and the winner will be determined by the fans. Nelson Cade, III will sing “Best Part” by Daniel Caesar featuring H.E.R. John instructs him to throw some fireworks in the performance if he wants to America to vote for him. Todd Michael Hall is singing for “Somebody to Love” by OneRepublic and Blake tells him to be as aggressive with the verses as he is with the chorus. Samantha Howell is singing “Always On My Mind” by Willie Nelson and Kelly tells her to “let it ring” and bring in those votes! Last, Michael Williams will sing “You Are the Reason” by Calum Scott. Nick tells Michael to bring his pitch up a bit on the high notes. Voting is now open on “The Voice” app and official website.

9:50 p.m. — Todd is up first for Team Blake putting his classic rock spin on a modern song. Todd is really off key on the high notes and his performance is so theatrical I just can’t see him moving forward after this. Nelson is up next for Team Legend and takes this competition back to something worthy of being called “The Voice,” but he didn’t exactly knock it out of the park either. The door is open.

9:59 p.m. — Michael is the third artist up in this four-way Knockout and I’m continually surprised by his progression with each performance. I thought Nelson would walk away with this Knockout, but Michael has been my favorite so far! Last up is Samantha and she is doing a solid enough job to possibly rally some country fans behind her, but my choice to win this Knockout would be Michael from Team Nick. Who do YOU want to win this four-way Knockout? That’s a wrap for tonight.

Predict “The Voice” when the live shows start at some future date.. Be sure to make your predictions for all of our other reality shows, including “American Idol,” “Survivor” and more to influence our racetrack odds. You can keep changing your predictions until new episodes air and compete to win a spot on our leaderboard and a $100 Amazon gift card. See our contest rules and sound off with other fans in our reality TV forum. Read more Gold Derby entertainment news.