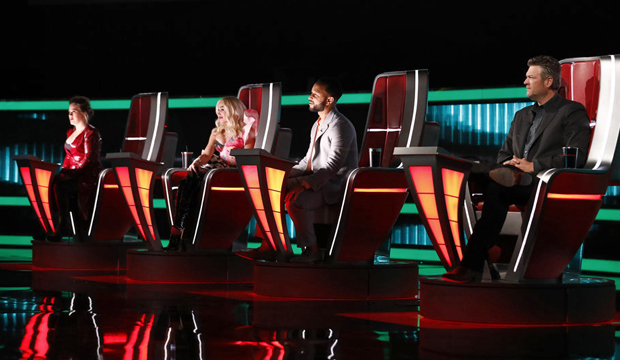 Heading into the first week of live playoffs on “The Voice,” there were still 17 artists in the running to join the winners list. That number got whittled down to only the Top 9 during Tuesday’s results show, which meant a whopping 8 artists had to say goodbye. Of this unfortunate group, who do you think was most robbed of a spot in the Top 9: Madeline Consoer, Joseph Soul, Sid Kingsley, Taryn Papa, Chloé Hogan, Tanner Gomes, Payge Turner or Worth the Wait? Vote in our poll below.

Team Kelly‘s results were up first, with host Carson Daly announcing Desz as America’s choice to advance to the next week. Kelly then picked Cami Clune as her judges’ save, saying it was the smart thing to do strategically as Cami had a lane all to herself. As for the others, Tanner Gomes sang in the instant save while Madeline Consoer was immediately eliminated.

The fate of Team Gwen was determined next, with Carter Rubin earning the most votes from America. Gwen agonized over her choice, ultimately picking Ben Allen to advance to the next episode. Rounding out her team, Payge Turner received more votes than Joseph Soul, so she performed in the instant save while he said a quick goodbye.

Team Blake was third in line, with the viewers voting to sail Ian Flanigan through to next week’s Top 9. Blake then had to save one of his remaining team members, and he named Jim Ranger. Of the remaining three artists, trio Worth the Wait had the most votes so they earned a chance at the instant save, while Sid Kingsley and Taryn Papa were both cut.

Finally, Team Legend was in the spotlight, with America selecting John Holiday as their absolute favorite of his artists. After a quick debate, John decided to keep Tamara Jade in the competition. Bailey Rae earned more votes than Chloé Hogan so Bailey’s fate was once again in viewers’ hands, this time via the instant save. And Bailey prevailed!