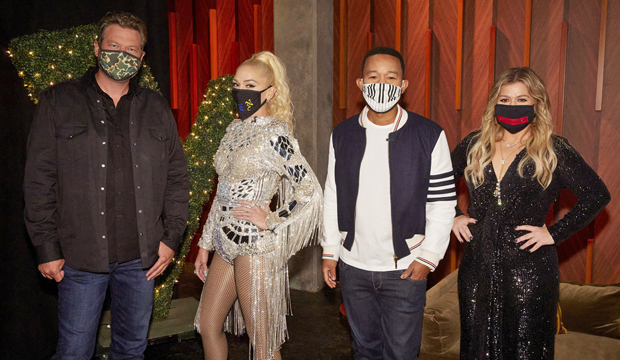 Despite a later-than-usual start date brought about by the coronavirus pandemic, “The Voice” is back — in studio — for its 19th season. Coaches Blake Shelton, Kelly Clarkson and John Legend have returned yet again, while Gwen Stefani has replaced Nick Jonas as the fourth judge. There are lots of changes this year as the country continues to deal with Covid-19, the most noticeable of which was the elimination of a live studio audience. Instead, fans Zoomed in from their homes to watch the blind auditions remotely. So how did the two-hour season premiere play out on Monday night?

Below, read our minute-by-minute “The Voice” recap of Season 19, Episode 1 to find out what happened Monday, October 19 at 8:00 p.m. ET/PT. Then be sure to sound off in the comments section about your favorite artists on NBC’s long-running reality TV show, which coach you’re rooting for and who you think will ultimately join “The Voice” winners list.

8:10 p.m. – No time is wasted getting the first blind audition of the season — Tamara Jade, a 30-year old from Bowie, Maryland. Tamara is of Jamaican heritage and her mother is a music teacher. When she was just 23, Tamara went to New York to pursue her career and even sang at the Apollo a few times. Just as her career began to take off, Covid-19 hit and derailed her magical ride. Tonight Tamara is singing “Cuz I Love You” by Lizzo, an artist she was able to sing backup for at the American Music Awards. Immediately after the opening note Kelly and John turn their chairs, but Blake and Gwen need more time. Kelly’s jaw is on the floor when finally Gwen and Blake hit their buttons. It’s a four-chair turn! Kelly screams, “You are incredible!” Kelly is certain Tamara will be in the finale and makes a compelling argument for Tamara to join her team. Tamara engages is fun banter with all the coaches, but ultimately chooses her “Uncle John.” Team Legend is the first on the board for Season 19.

8:20 p.m. – Next up is Lauren Frihauf, a 16-year old from Byers, Colorado. Lauren has grown up on a farm and says her rural upbringing has given her time to work on her music. She also attended the School of Rock in Aurora, where she got an affinity for rock music and began doing open mic sessions around the area. Tonight she’s singing “Come to My Window” by Melissa Etheridge. She’s got an okay voice, but I’m not buying her as a contender. The rock sound is forced, but it doesn’t prevent John and Gwen from both turning their chairs. Gwen loves that Lauren is such a young aspiring artist and says it would be a “dream” to work with her. Both Kelly and Blake endorse Gwen to coach the teenager before John gives an uninspiring plea to take her for himself. Lauren ultimately decides to join Team Gwen.

8:35 p.m. – Auditions continue with Joseph Soul, a 34-year old from Hana, Hawaii. He grew up living the simple life, he didn’t even have electricity. That’s why music was so important to him. He started DJ’ing parties when he was 12 years old and even had his own residency in Las Vegas, but singing has always been his passion. Over the last six years he’s focused on his solo career and tonight he’s singing “Is This Love,” a Bob Marley classic he’s turned into beautiful R&B ballad. He’s got incredible range and a nice falsetto, so it’s surprising the judges don’t turn around more quickly. Finally Kelly and Blake decide to battle it out to get this killer vocalist on their teams. Kelly is shocked this wasn’t a four-chair turn but seems delighted to have less competition. Regardless, Blake puts up a fight by pointing out his seven champions, including Season 2 winner, R&B/pop singer Jermaine Paul. The sucking up didn’t work and Joseph joined Team Kelly.

8:45 p.m. – Up next is Ian Flanigan, a 30-year old from Saugerties, New York. Ian lives in a motor home with his family and travels throughout the year finding gigs in various states. The pandemic put his tour to a halt and now he hopes to show his daughter you don’t ever give up on your dreams. Tonight Ian is singing “Colder Weather” by the Zac Brown Band. He’s got a husky, smooth voice that seems tailor made for Team Blake. There’s a great storyteller quality about him and, sure enough, Blake soon becomes the first coach to turn his chair. The song concludes and Blake has won over Ian unopposed.

8:55 p.m. – Now that each coach has one slot filled, we’re up to our fifth contestant of the night, Hailey Green, a 14-year old from St. Martin Mississippi. Hailey is a proud football player who occasionally sings “The Star Spangled Banner” before her games. Tonight she’s singing “Soulshine” by The Allman Brothers Band. Hailey sounds a little nervous and veers off pitch throughout the first verse. She improves a little bit by the chorus, but the coaches look like they sense an inexperienced artist is on stage. Nobody turns around for Hailey, but the coaches give her plenty of encouraging advice.

9:10 p.m. – The first artist in the second half of this premier episode is Jim Ranger, a 38-year old from Bakersfield, California. Jim is a third generation pastor who grew up traveling the southern United States, going from church to church. Now Jim is a campus pastor hoping to make it big in the music business. Tonight Jim is singing “Blue Ain’t Your Color” by Keith Urban, but he’s definitely got more of a soul/rock vibe to him. John quickly turns his chair, followed by Gwen and Blake. Gwen gives a passionate plea, but John tops everyone, playing an anti-Blake advertisement in which he calls out the seven-time champ for repeatedly lying to contestants, lol. Negative ads aren’t effective and Jim chooses Team Blake anyways.

9:15 p.m. – Up next is Eli Zamora, a 25-year old from El Paso, Texas. He works as a gondolier in Las Vegas, rowing tourists around in a boat while showing them the local attractions. Eli immigrated from Mexico as a child and music helped him learn the English language. Tonight Eli is singing “Ya Lo Se Que Tu Te Vas” by Juan Gabriel. Eli has a warm, sultry tone with plenty of power behind it. There is something very old fashioned about his delivery and it’s refreshing to listen to. Kelly is sold and becomes the first to turn her chair, feeling the passion as she stands and admires Eli from the audience. Nobody else turns around and Kelly is dumbfounded at the freebie she just won!

9:25 p.m. – The next audition starts off blind for the audience, as well as the coaches, with a mysterious woman singing “Call Out My Name” by The Weeknd. She has a fantastic lower range, which is a breath of fresh air. So many singers love to show off their highest notes, but few can nail the low notes and she’s fantastic. Blake turns around first, which then reveals the singer is Payge Turner, a 27-year old from Trinidad & Tobago. I love everything about her vibe and I’m a little shocked only Gwen follows up Blake with a chair turn. Gwen tries to relate the the singer, who is now based in Seattle, by saying her parents were going to name her Paige as well. Blake compliments her ability to work the stage, but Payge ultimately decides to join Team Gwen. That’s a major score for Gwen!

9:35 p.m. – Next to the stage is Corey Ward, a 34-year old from Hartsville, South Carolina. Corey started playing music when he was 13 and credits it for getting him through the ups and downs through life. His mother was recently diagnosed with incurable cancer and he’s dedicating this journey on “The Voice” to her. Tonight he’s singing “Way Down We Go” by Kaleo. Unfortunately, none of the coaches turn. Ugh, I hate when they have such heartbreaking intro packages and then get rejected by the coaches. His mother was so excited for him to sing, but it wasn’t meant to be.

9:50 p.m. – Next up is Marisa Corvo, a 33-year old from Staten Island, New York. Marisa has played piano since the age of two and moved to Nashville when she was 19. At 21 she came out as a lesbian, but her family did not take it well. She was sent to conversion therapy which tormented her, but her family eventually came around and are now completely supportive. Tonight she’s singing “Perfect” by Pink and she’s the first of the night to sit at the keyboard. This girl has some serious chops and it draws an instant smile from John. As the song escalates, the judges can’t contain themselves, and oddly enough, John is the only coach that did NOT turn. After some fun arguments from Blake, Gwen and Kelly, Marisa joins Team Kelly.

9:59 p.m. – The last artist of the night is a fantastic jazz singer that once again has been hidden from our view. She’s singing “Misty” by Ella Fitzgerald and she has an incredible range and sings nothing like anyone we’ve heard so far. First to turn his chair is John, quickly followed by Kelly, who doesn’t yet realize she’s been blocked. She’s gonna be pissed! Gwen is last to turn her chair, at which time the singer is revealed to be John Holiday from Rosenberg, Texas. Wow! I absolutely thought a woman was singing and so did all the coaches. Finally Kelly realizes she has been blocked and lowers her head in shame. We learn John is a classically trained soprano opera singer who was bullied for being gay and having a high voice, but now he’s comfortable in his own skin and able to celebrate his talents. I’m actually a little disappointed Kelly was blocked, I think she’d be the perfect coach for him, but ultimately the Johns unite and John has chosen to be on Team Legend. That’s a wrap for tonight!