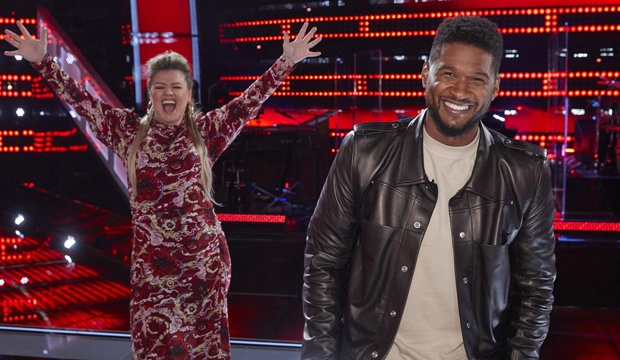 Last week on “The Voice,” the knockout rounds commenced with two artists getting sent home: Casmè for Team John Legend and Ryan Berg for Team Gwen Stefani. That left 26 artists still in the running to win the Season 19 championship, with many more about to be eliminated during Monday’s two-hour episode. Gwen was the only coach to use her last save of the season (on country singer Ben Allen), which meant John, Kelly Clarkson and Blake Shelton still had the power to swoop in and save an at-risk contestant before the all-important live shows. How did Night 2 of the knockouts play out, and what advice did mega mentor Usher give to the remaining artists?

Below, read our minute-by-minute “The Voice” recap of Season 19, Episode 10 to find out what happened Monday, November 23 at 8:00 p.m. ET/PT. Then be sure to sound off in the comments section about your favorite artists on NBC’s long-running reality TV show, which coach you’re rooting for this season and who you think will ultimately join “The Voice” winners list.

8:00 p.m. — “Previously on ‘The Voice’!” In the ninth episode, viewers watched the first round of knockouts play out, with Usher helping each of the four coaches prepare their artists for the big stage. To recap, Team Legend’s Tamara Jade sang “Higher Ground” and beat Casmè, Team Gwen’s Payge Turner took on “Creep” and beat Ryan Berg, and Team Blake’s Worth the Wait belted out “Delta Dawn” and beat Ben Allen, though he was quickly stolen by Gwen. How will tonight’s two-hour episode play out? Let’s go!

8:20 p.m. — The first knockout of the night will be Desz vs. Sid Kingsley on Team Kelly. Desz will be singing “Can We Talk” by Tevin Campbell, a song she can relate to because she was so shy as a child. Usher tells Desz to scale back her performance a bit to give more of a mystique. Sid is Kelly’s stolen artist from Team Legend, and he’ll be singing “Make it Rain” by Foy Vance. Sid has always been musical, but he’s not always comfortable singing without an instrument. Usher tells him to use his piano skills to draw people in with more than his voice. Desz is up first, and I love her lower register. She has a lot of vocal qualities similar to Toni Braxton, and she took Usher’s advice, playing coy for the first half of the song before letting it rip. That was great! Sid is up next, absolutely killing these vocals from behind the piano, lifting all the coaches off their chairs while belts out the bluesy tune. This was an incredibly close knockout and I’m not sure which way Kelly will go. The coach can’t believe how stupid she was for putting these two artists against each other, but she decides Desz is the winner of this knockout!  John hits his steal button for Sid, but Blake isn’t letting John take him so easily. We’ve got a double steal! Sid decides to join his third team of the season, Team Blake!

8:40 p.m. — The second knockout of the night will be Jim Ranger vs. Jus Jon on Team Blake. Blake knows these two singers are in different lanes, but he considers them the most soulful on his team. Jus Jon will be singing “Finesse” by Bruno Mars, a song he’s performed many times with his band at home. Usher gives him pointers on how to differentiate his vocals throughout the song to add some excitement. Jim will be singing “Humble and Kind” by Tim McGraw, dedicating the song to his kids. Usher is impressed by Jim’s genuine comfort on stage and says he’s limitless as a vocalist. Jim is singing first and he really is one of the best vocalists this season. He gets a standing ovation from the coaches. Next, Jus Jon brings some fun to the show with his uptempo dance performance. His vocals don’t hold up to Jim’s, but Jus Jon is a refreshing performer that is unique on this show. Ultimately, Blake decides Jim is the winner of this knockout and Jus Jon has been eliminated.

9:00 p.m. — The next knockout is Bailey Rae vs. Lauren Frihauf on Team Legend. Bailey is singing “Let Me Down Easy” by Billy Currington, a song John thinks she delivers authentically. Usher thinks Bailey needs to work on her presence, but if she figures that out Team Legend could win Season 19 with a country singer. Next, Lauren will be singing “Cry Baby” by Janis Joplin. Usher thinks this song is a misstep and suggests rearranging it. Naturally, Lauren isn’t a screaming rocker like Janis, so she needs to make the song her own. Bailey performs first and isn’t particularly captivating. Her voice is a little hot and cold and suffers from pitch problems. I felt like I just kept waiting for it to end, but Kelly gave her a standing ovation, so what do I know? Lauren is singing now and her voice isn’t always consistent either, but there’s just something interesting about her as a performer. She gets a standing O from Gwen and Blake. The final word is John’s and he has decided the winner of this knockout is Bailey. Lauren has been eliminated.

9:15 p.m. — Up next from Team Blake will be Ian Flanigan vs. James Pyle. During James’ rehearsals to “In My Blood” by Shawn Mendes, Usher reminds him not to get ahead of the beat. In Ian’s run through of “Beautiful Crazy” by Luke Combs, Usher calls him “special,” “raw” and “one of Blake’s top guns.” Ian is singing first and he’s got a really cool, raspy tone that is very recognizable but not forced. I agree with Usher, Ian could be a real force this season. Next, James takes the stage and completely misses the mark. He’s screaming, completely off key and probably giving the worst performance of the knockouts. That was painful! The coaches lie and say it’s beautiful. It was a complete mess. I’m shocked by how close the coaches think this knockout is, but Blake has finally made a decision. The winner of this knockout is Ian! James has been eliminated.

9:17 p.m. — Each season there are always a few knockouts they just don’t deem worthy to air in full. That was the case when Team Gwen’s Joseph Soul defeated Van Andrew in a brief clip tonight. Van has been eliminated from the competition.

9:40 p.m. — Next up for Team Kelly is Kelsie Watts vs Madeline Consoer. Kelsie is choosing to sing “You Oughta Know” by Alanis Morssette because she relates to the lyrics, but Usher wants her to start from a place of frustration. He thinks the song needs more attitude and intensity. Madeline will sing “Die from a Broken Heart” by Maddie & Tae, a song she listens to with her mother when she’s going through heartbreak. The knockout is a little dark. Both Kelsie and Madeline seem to have issues embodying the messages in their songs, so whoever does that better will win this knockout. Kelsie is singing first and she’s got an ability to hit some incredible notes, but none of this feels genuine. I feel like she’s singing poorly in a bad Broadway rock musical. Madeline is up next and immediately puts me at ease for just singing with real emotion and controlling her notes. There is no question that Madeline deserves to win this knockout, but does Kelly agree? Yes! Madeline has won this knockout and Kelsie has been eliminated.

9:59 p.m. — The last knockout of the night is Chloe Hogan vs. Carter Rubin on Team Gwen. Carter is singing “You Say” by Lauren Daigle. He relates to the pressures of trying to fit in because he’s always been a little different. Chloe will sing “Weak” by SWV, a R&B classic that Usher would love to hear Chloe sing with more dynamics.  Carter is on stage first and the kid can SING. Watching this 14-year old belt out this inspirational ballad is emotional to watch. He totally nailed it and Kelly is practically sobbing. Chloe will now have to follow that, singing in a completely different style with a completely different vibe. And I love what she’s giving! John flies off out of his chair while he listens Chloe massage the notes of this laidback jam. She’s got a really nice tone to her voice. Gwen is tortured by the decision she must make, but ultimately decides the winner of this knockout is Carter! Thankfully, John steals Chloe so we’ll get to see more from her on Season 19 of “The Voice.”