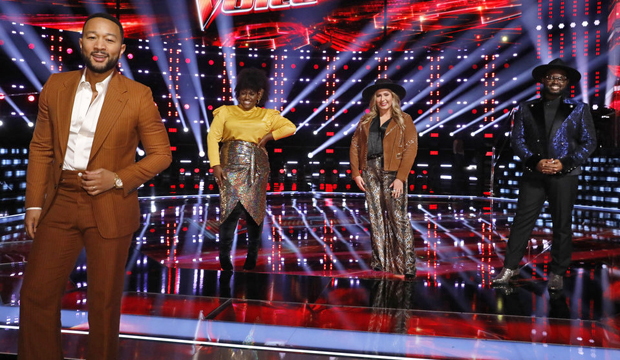 John Legend entered Top 9 week on “The Voice” with a leading three artists still on his team: Tamara Jade, Bailey Rae and John Holiday. Meanwhile, his rival coaches all had two apiece: Desz and Cami Clune for Team Kelly Clarkson, Carter Rubin and Ben Allen for Team Gwen Stefani, and Ian Flanigan and Jim Ranger for Team Blake Shelton. On Monday’s performance show all nine singers gave it their all on the stage, but who was strong enough to make it into next week’s finale?

Below, read our minute-by-minute “The Voice” recap of Season 19, Episode 14 to find out what happened Monday, December 7 at 8:00 p.m. ET/PT. Then be sure to sound off in the comments section about your favorite artists on NBC’s long-running reality TV show, which coach you’re rooting for this season and who you think will ultimately join “The Voice” winners list.

8:00 p.m. — “Previously on ‘The Voice’!” In Thursday’s holiday special, the show took a break from the competition in order to celebrate the Christmas season. Clips were shown from previous years of coaches past and present, including Adam Levine and Pharrell Williams, taking the stage to sing the classics. The night ended with a special duet from Blake and Gwen of “You Make it Feel Like Christmas.” Happy holidays, everyone!

8:01 p.m. — For tonight’s semifinals it’s Fan’s Week which Carson Daly explained will have each of the 9 artists singing a new song dedicated to their own fans. They are also combining for special trios with one another.

8:03 p.m. — First up was Blake’s artist that he saved from elimination last week, Jim. His song choice was Harry Nilsson‘s “Without You” which he dedicated to his son. Blake was pleased with the track because he said he’s been waiting many seasons to have an artist strong enough to sing it. I think many viewers will be more familiar with the Mariah Carey R&B version of the song, so Jim’s rock version will sound fresh yet gritty in a way that may surprise them. Blake, John and Gwen all stood in ovation for the performance and agreed that it was not only Jim’s best performance, but one of the strongest overall across the season.  Blake said that it was the perfect time to “have that kind of performance” and he was “more impressed than [he has] ever been.”

8:11 p.m. — Carson explained that in the results tomorrow, the top vote-getter from each team will advance to the finale and the rest of the artists will sing for the instant save. That means that each coach will have at least one artist singing next week for the win.

8:12 p.m. — Next to sing was Cami from Team Kelly with “The Joke” by Brandi Carlile in dedication to her mom. During rehearsal Kelly was impressed by how Cami was able to take on a character in the song as if she was an actress and expected her to deliver an emotionally moving performance. Cami’s stage styling was once again dark with a slight 80s rock influence which worked really well for the dramatic track, but in some parts the vocal heights of the song escaped her grasp. Still Gwen called her voice angelic and said that her tone is pure. Kelly pinned down that Cami is a “believable” singer that performs as if she’s experienced the lyrics that she’s singing.

8:22 p.m. — For the first trio of the night, Jim, Desz and Carter took on “Willy Go Round in Circles” by Billy Preston, hoping that it would be the perfect feel good song. The pairing of the three seemingly different artists actually worked really well with each of them taking on the parts of the song that worked best for their voice. Uptempo songs don’t usually work well on singing competition shows, but for some reason this did in large part because the artists themselves had fun with it and took their participation in the trio seriously.

8:30 p.m. — Gwen’s first artist of the night was Ben, a steal from Team Blake that chose to take on Blake’s song “All About Tonight.” He told Gwen that the performance would be a dedication to her and Blake in honor of how they brought together their two genres as artists. Gwen’s advice was to treat the performance like a music video since there’s no audience in the studio. Music video inspiration or not, Ben’s take on the song was a traditional country rendition of a band and a singer on a standard concert stage. In that regard it was rather boring compared to the previous two artists who put on more elevated shows. That being said, Blake thought he “slayed” the song and made him want to be the artist performing on stage. Gwen thought it was a winning performance that “America will be all over.”

8:42 p.m. — Next was John, the leading vote-getter last week from Team John. Tonight he chose “Fix You” by Coldplay, a song he dedicated to his grandmother as well as John and his wife Chrissy Teigen. John was happy with the song choice because it was another opportunity to show a new aspect of his capabilities as a vocalist. Beginning the performance from the piano, John was able to flip the song from a quiet and beautiful hymn to a bigger, epic pop song once he got up and the band joined him in the end. Kelly said that the last part of the song where he allowed room for “brokenness” was perfect and broke her. John reacted emotionally to the song as well and was proud of John’s performance.

8:54 p.m. — The next trio of the next was from Tamara, Ben and Ian with “Tulsa Time” by Don Williams. While Ben and Ian were both really solid here, it was right up their alley in terms of genre and style so needless to say the star was actually Tamara who adapted well and made her parts her own.

8:57 p.m. — Team Kelly was back on stage next with Desz’s take on En Vogue‘s “Don’t Let Go (Love).” She dedicated the song to her fans that struggle with body confidence issues and need a boost of self love. The challenge in rehearsal was for Kelly and Desz to figure out an arrangement for the song, originally performed by a girl group, that made sense for a soloist. There was no denying that Desz could fill the vocal space normally occupied by a group as her performance of the song was so incredibly large and powerful. John said that it was soulful and that her voice pierced through the song. Kelly said she’s been watching video of the rehearsal on repeat because it’s her favorite performance on any of her teams ever.

9:09 p.m. — Next up was the wild card artist from Team John, Bailey Rae. In order to bring together soul and country, they chose for Bailey to sing “Georgia On My Mind” by Ray Charles. It was a beautifully reserved performance with the smoothness and clarity of her voice taking center stage with not too many distracting frills. Blake was supportive of the performance by saying that she encompasses specific old school country artists from the 80s and that makes her so fresh for the show right now. John pointed out that she is confident and cool for her age and he’s proud of her.

9:21 p.m. — As a special treat, Gwen performed her new single “Let Me Reintroduce Myself.” Like the songs says (“I’m still the original me”), the performance and lyrics relate back to Gwen’s past hits and her career as one of the most enduring pop stars of the last 20 years.

9:28 p.m. — Cami, John and Bailey Rae joined forces to sing Bastille’s “Pompeii” to bring “joy, hope and love” to everyone looking for it. With their three wildly different styles, the performance was a little all over the place compared to the other two trios, but as great vocalists they did manage to bridge it together to give us something that showed off their talent.

9:32 p.m. — For Ian’s solo performance for Team Blake he dedicated his rendition of Sarah McLachlan‘s “Angel” to his new fiancé. Blake told him that because people know the song so well and that his voice is already so different from Sarah’s that he doesn’t need to change the arrangement too much. On that point Blake was absolutely correct because Ian’s performance felt both comfortable and familiar while also completely his own. Blake gave credit to Kelly for the suggestion of this song choice for Ian as he thinks it was an incredible idea and that he delivered perfectly.

9:44 p.m. — John’s save last week went to Tamara, who performed next for his team. For her song they chose “Let It Be” by The Beatles, dedicated to John himself as he is her “newest good luck charm.” John said that like Aretha Franklin did, he wants Tamara to span genres with her vocal talent and make it her own by singing it like she “would in church.” Tamara took John’s advice to heart and delivered an elegant take on the classic song, making it her own and adapting it to fit her big voice. Gwen loved that Tamara showed a new “mode” and says that her personality always comes through. John called it “stunning” and thinks she is a superstar whose light shines through.

9:55 p.m. — The final performance of the night came from Carter, Gwen’s young 15 year old artist. Gwen chose the song “Rainbow Connection” from The Muppet Movie and Carter dedicated it to his brother who has autism. Though it’s clearly a children’s song, and that was the intended effect here, Carter provided a mature and incredibly controlled performance of it. Gwen was in tears at the close of the song, relating to all the times she sang it to her own kids.

TOMORROW NIGHT: John and Kelly both perform and five artists advance to the finale, one being the last instant save of the season.