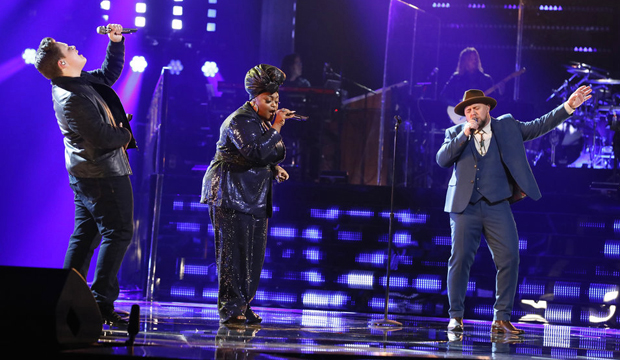 After the Top 9 artists performed on Monday’s episode of “The Voice,” tension filled the air as four of them knew they were about to be eliminated. Gold Derby’s exclusive odds named the following four contestants as likely eliminees: Jim Ranger of Team Blake Shelton, Bailey Rae of Team John Legend, Ben Allen of Team Gwen Stefani and Cami Clune of Team Kelly Clarkson. Did our predictions come true, or were viewers left stunned? Here’s how Tuesday’s results show played out: one artist from each team advanced to the finale based on America’s overnight vote, and then the fifth spot went to the winner of the live instant save.

Below, read our minute-by-minute “The Voice” recap of Season 19, Episode 15 to find out what happened Tuesday, December 8 at 8:00 p.m. ET/PT. Then be sure to sound off in the comments section about your favorite artists on NBC’s long-running reality TV show, which coach you’re rooting for this season and who you think will ultimately join “The Voice” winners list.

8:00 p.m. — “Previously on ‘The Voice’!” In the 14th episode, all nine artists took the stage twice: for solo songs and for trio performances. The three groups were: Carter Rubin, DeSz & Jim for “Will It Go Round in Circles,” Ben, Ian Flanigan & Tamara Jade for “Tulsa Time” and Bailey, Cami & John Holiday for “Pompeii.” The wait is finally over as we’re about to find out which five artists advanced to the finale and which four were eliminated. Let’s go!

8:08 p.m. — Host Carson Daly explains that the top vote-getter from each team will advance to next week’s finale, with the remaining contestants competing for the instant save to round out the Top 5. Then he introduces Kelly for a holiday performance of “Underneath the Mistletoe” with country star Brett Eldredge. Immediately after the duo fills the room with Christmas joy, Carson comes along to remind everyone of the stressful reason they are actually together tonight. To announce the Top 5! Team Kelly is up first and the artist who will advance straight into the finale is Desz! Cami will compete for the instant save.

8:13 p.m. — It’s time for Bailey, John and Tamara to find out who will be representing Team Legend in the finale. The artist with the most votes is John! Bailey and Tamara will compete for the instant save.

8:15 p.m. — Team Blake steps on the stage to find out who will be moving forward. The artist with the most votes is Jim! Ian heads backstage to prepare for the upcoming instant save. That was a bit more surprising than the other two team results, but Blake has been saying Jim would be in the finale for weeks. He was right!

8:25 p.m. — Team Gwen will have to wait a few more minutes to hear their results while Legend sings his latest single, “Wild,” from his Grammy-nominated album, “Bigger Love.” After the EGOT winner delivers his powerhouse ballad, Team Gwen takes the stage to find out who is heading to the finale. The artist with the most votes is Carter! So Ben heads off to prepare for the instant save. Five performances coming up!

8:33 p.m. — Up first competing for the instant save is Ben Allen for Team Gwen, singing “Pray for You.” Gwen thought his performance was beautiful. She loves how he is able to show different sides of himself each time he performs.

8:37 p.m. — The second artist singing tonight is Cami from Team Kelly. She’s taking on the emotional ballad, “When the Party’s Over,” and this may be better than her performance Monday night. Kelly tells America that Cami has just shown what she is capable of and endorses her to win the instant save.

8:45 p.m. — Bailey Rae is up for Team Legend, keepin’ it country with “Your Cheatin’ Heart.” John thought her rendition was fun and loves her charm.

8:49 p.m. — Also from Team Legend is Tamara singing “Feeling Good.” It’s definitely the most vocally dynamic performance of the night and she’s leaving it all on the stage. John calls her “engrossing” and “engaging” and says “her light shines through everything.”

8:51 p.m. — Last up is Team Blake’s Ian Flanigan singing “Anymore” for his chance to become a finalist. He’s up there without the guitar tonight and seems a little less comfortable, but his voice is still up for the challenge. Blake says he’s surprised to see Ian in the instant save and he feels strongly that America will put Ian into the finale. He calls him a once-in-a-lifetime voice. And now it’s up for America to decide who will win this instant save.

8:59 p.m. — Five artists have competed to become one of five finalists and America just had five minutes to vote for which one that will be. Joining Carter, Desz, Jim and John in the finale will be…Ian! Team Blake will have two artists in next week’s finale.