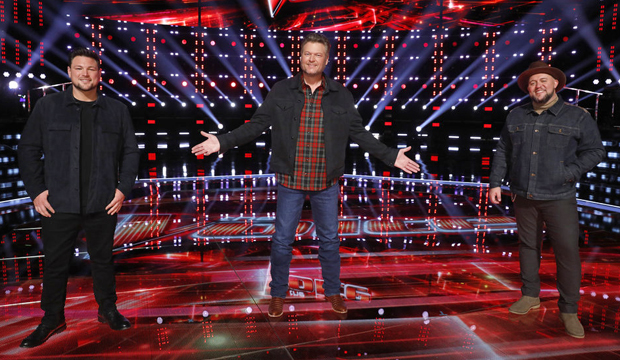 Last week on “The Voice,” the Top 5 artists of Season 19 were officially unveiled: Ian Flanigan and Jim Ranger of Team Blake Shelton, Carter Rubin of Team Gwen Stefani, Desz of Team Kelly Clarkson and John Holiday of Team John Legend. Finale week officially began on Monday night, with this fearsome fivesome taking the stage to make their final cases to America for why they deserved to join the show’s winners list. Whose performances wowed you the most at home?

Below, read our minute-by-minute “The Voice” recap of Season 19, Episode 16 to find out what happened Monday, December 14 at 8:00 p.m. ET/PT. Then be sure to sound off in the comments section about your favorite artists on NBC’s long-running reality TV show, which coach you’re rooting for this season and who you think will ultimately join “The Voice” winners list.

8:00 p.m. — “Previously on ‘The Voice’!” In the 15th episode, America said goodbye to four talented artists: Cami Clune, Tamara Jade, Bailey Rae and Ben Allen. Of this group, viewers voted that Tamara was the most robbed of a spot in the finale. With only five contestants left in the competition, it’s still anyone’s guess as to who might prevail on Tuesday night. Will Ian, Jim, Carter, Desz or John make the most of performance night and sway any last-minute voters? Let’s go!

8:01 p.m. — The night kicked off with Carter sitting down with Carson Daly and Gwen to discuss his journey this season. Together they explained how much confidence he’s gained with every week in the competition. Gwen said that the plan is to have him inspire people with his performance of “The Climb” by Miley Cyrus in hopes that it will propel him to be the youngest winner of the show ever. With a string quartet on stage with him, Carter’s performance was simple, elegant and surprisingly reserved for such a big song. Blake told him that his “talent and heart” is great to hear at the end of what was a difficult year for everyone. Gwen said it’s clear that he’s meant to be singing and she thinks he’ll be voted the winner.

8:11 p.m. — Singer/songwriter Justin Tranter joined Kelly to help DeSz craft the perfect debut song for the finale, “Holy Ground.” Justin advised DeSz that it’s her responsibility as the vocalist to bring all the soul to the song and that’s exactly what she did in her performance. With a good pace and midtempo beat, the song built from strong verses into a large climax that only a voice like DeSz’s could rise to. John loved the song choice because it showed that she knows who she is as an artist. Kelly had a hard time collecting her emotions in speaking to her, saying “I needed that song. You needed that song.” She also reiterated that DeSz is the greatest vocalist she’s ever worked with on the show and she’s proud to be her coach.

8:23 p.m. — When Ian sat down with Carson and Blake he expressed that he’s shocked to be in the finale, after being a one chair turn and needing the semi-final Instant Save in order to make it. For his cover tonight he took on Jamey Johnson‘s “In Color” because it’s a storytelling song that allows him to express what kind of artist he is. As a musician that has been “doing things the old school way” by touring in his RV with his family, Blake is extremely proud of Ian as an artist. For the performance they kept the stage production at bare minimum in order to put Ian’s voice forward. It’s a decision that worked well not just for the lyrics of the song, but to allow Ian’s gritty tone to be the focus because it’s what makes him such a strong contender on the show. John pointed out the “distinct character” in his voice and said that he loves the story of he and his family traveling around the country sharing music. Blake thinks that there’s no one who sounds like Ian and for that reason he sounds both nostalgic and from the future as an artist.

8:35 p.m. — Jim got help on his debut song “Last” from producer Ross Copperman who helped create two of Blake’s recent hit singles. Both Ross and Blake told Jim that even though it’s a soft sort of song that it’s possible for him to “hit the audience in the face” with it if he performs it in the right way. Even with that advice, Jim kept the song pretty low key throughout without any big moments for his voice to explode. Instead it was a small, intimate performance that showed the more delicate sides of his voice. Gwen and John both thought it was a pretty song and that it’s clear he sings from the heart. Blake told him that there’s definitely a place for him on country radio and he hopes he stays in that lane for his career.

8:47 p.m. — John’s debut song “Where Do We Go?” was inspired by his fans and picked in order to find his own lane in music as an artist from a diverse set of genres. He also worked through rehearsal with Justin who told him that his voice needs to go up in power at the same time that the lyrics say that. Of all the original songs we heard so far, John’s was the most upbeat, pop-inspired one and he even included dancers on stage for the performance. The song was a far cry away from everything else we’ve heard John sing this season, but Kelly thought his ability in the song was really impressive. Legend explained that part of the song selection was about challenging himself and breaking the mold that people expect him to perform within.

8:59 p.m. — When DeSz sat down with Kelly and Carson, Kelly said that even she wouldn’t cover “Unbreak My Heart” like DeSz did in the Blind Auditions for a four chair turn, but added that her favorite performance of hers was “Don’t Let Go (Love).” For her final song, DeSz picked “Landslide” by Fleetwood Mac, calling it “the perfect song for me in this moment” so that she can “open up emotionally and be vulnerable.” Kelly liked the song choice because it’s totally unexpected. As promised, DeSz gave the song her own spin, creating something gorgeous and contained that will remain completely unique from everything else she performed this season. She got the first complete standing ovation of the night with Gwen saying that Stevie Nicks is probably enjoying it from home. Kelly said that DeSz does things vocally with precision and rawness that she wishes she could do herself, doubling down on all her comments this season that she’s a vocal powerhouse.

9:11 p.m. — Gwen and Blake shared a performance of their hit duet song “Happy Anywhere” as a special finale night treat. It was an adorable show of their love for each other with them focused on one another as they sang the lyrics about how happy they make each other.

9:18 p.m. — Ross returned to help with Ian’s original song “Never Learn” that was chosen because of how it relates to being a parent. In the rehearsal Blake asked Ian to make sure he’s not letting his voice trail into a mumble and that he makes each lyric clear. The performance was gentle and like a lullaby compared to some of the other stuff we’ve seen from Ian, so in that regard it was an unexpected departure for him. John liked the way the lyric told the story of parenting and thought Ian sang it “with wisdom.”

9:29 p.m. — John’s sit down with Carson and Legend revealed that John was able to make his coach emotional in a way that he isn’t usually on the show. Together they chose for John to take on Beyonce‘s biggest ballad “Halo” on for his final performance. John says that the show has helped him stretch himself beyond what he thought was possible and that Legend allowed him to not have to hide anymore. The song was an excellent choice for John to show off his high register and to further show who he would be a pop music artist. Kelly told John that she likes how he likes a challenge and that his “range is stupid incredible.”

9:42 p.m. — For Carter’s first single he was joined by Gwen and Justin to rehearse the song “Up from Here.” Justin said he crafted the song in a way that adheres to the classic style that Carter already performs in, but engineered the end of the song to build and get bigger with additional instruments. The midtempo ballad gave Carter a lot of room to play with his range and definitely came to an explosive ending for his voice to soar for a moment.

9:53 p.m. — Jim closed the night after discussing his growth this season with Carson and Blake. Carson noticed that all the other coaches started on the Jim train after he performed the Tim McGraw song. To end the season Jim took on The Beatles song “With a Little Help from My Friends.” The song was the perfect selection for Jim’s smooth, rich tone in the verses and the raw texture of his voice in the short chorus. Prior to the performance Blake said he’s in a position to win the show and after that performance he definitely solidified himself as a contender. Kelly called it Jim’s best performance of the season and Blake explained that tonight they decided it was the perfect time for him to become an “over singer.”