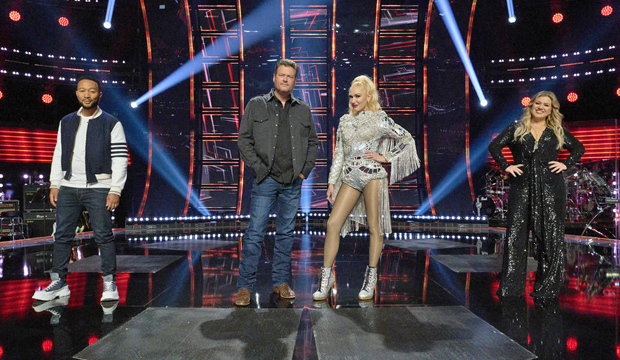 “The Voice” is back for Season 19 with one of the strongest coaching panels in the program’s long history: Blake Shelton, Kelly Clarkson, John Legend and Gwen Stefani. For its latest season, NBC’s reality TV show has evolved slightly due to Covid-19 — the live studio audience was replaced by remote Zoomers and the contestants’ family members/cheerleaders stayed safely at home. Tuesday’s installment was another two-hour deep dive into the blind auditions, with the coaches pushing their buttons when they heard voices that inspired them. So which coaches added the best artists to their teams in the second episode?

Below, read our minute-by-minute “The Voice” recap of Season 19, Episode 2 to find out what happened Tuesday, October 20 at 8:00 p.m. ET/PT. Then be sure to sound off in the comments section about your favorite artists on NBC’s long-running reality TV show, which coach you’re rooting for and who you think will ultimately join “The Voice” winners list.

8:00 p.m. – “Previously on ‘The Voice’!” In Monday’s season premiere, the four coaches returned to the stage after spending months at home quarantining due to the coronavirus pandemic. A total of nine artists were scooped up last night, with Team Kelly welcoming a leading three: Joseph Soul, Eli Zamora and Marisa Corvo. The other teams nabbed two apiece: Lauren Frihauf and Payge Turner for Team Gwen, Tamara Jade and John Holiday for Team Legend, and Ian Flanigan and Jim Ranger for Team Blake. How will tonight’s episode play out?

8:01 p.m. – Up first tonight was Taryn Papa, a 30 year old country music storyteller currently living in Nashville. Taryn is a member of one of only a handful of female-fronted bands playing in Nashville right now and so her goal is to take that leap forward for women in music. Tonight she went with “Anyway” by Martina McBride with the hope that Blake would take notice and turn his chair for her. By the end of the song John was the only coach to not turn, but Kelly was ineligible because Blake used his block on Kelly. Gwen made a pretty good case based on the realization that Taryn grew up listening to pop vocalists, but Blake’s assertion that she can fill an empty lane of a power vocalist in country music struck a chord with her and so she chose to join her dream team.

8:11 p.m. – The second artist of the night was Liam St. John from Spokane. In high school and college he was a track athlete on a journey toward the Olympics, but before that happened he found his passion for singing live in a band. With guitar in hand he performed a rearranged version of “Sex & Candy” by Marcy Playground. Once again Blake was the first coach to turn his chair, coming after Liam hit a quick high note. Gwen was the only other coach to turn, leaving the couple to battle it out for the second straight time. This time Blake’s lies and charms didn’t work to his advantage and Liam went with the punk princess herself, Gwen.

8:24 p.m. – Up next was Faye Moffett from Tulsa, a soul singer that grew up listening to the legends and was afforded the opportunity to sing for Rosa Parks before. Tonight she chose Demi Lovato‘s “Anyone” with just her voice and the piano as a sort of a cry out for someone to notice her talent and give her the chance of her dreams. Unfortunately none of the coaches gave her that chance despite what John called her “power” and “lovely tone.” He was more concerned that her runs didn’t work and Blake offered up that her “dominant vibrato” needs to be calmed down.

8:29 p.m. – Following Faye was 36 year old Aaron Scott from Wisconsin, a hard rock band vocalist that also works with students with special needs. He was drawn into a music career when he found that it was the one thing that kept his growing anxiety and depression at bay and now he wants to inspire his sons be living out his passion.

8:36 p.m. – For his blind audition, Aaron sang “Hemorrhage (In My Hands)” by Fuel and earned a very quick chair turn from John. If Gwen was shocked by John’s turn, she was even more shocked by Blake’s, but in the end she never turned her own and left it for the guys to fight out. John told Aaron that he should do something unexpected by joining his team so that they could blend their genres together while Blake made the point that he works with a lot of rock artists on the show. Choosing the safe route, Aaron joined Team Blake.

8:47 p.m. – Madeline Consoer, a 24 year old self-described “daddy’s girl” from Wisconsin, came to the stage with a lifetime of support from her parents in her pursuit of a music career. That support brought her to Nashville and then to the show where she performed the Maren Morris track “Girl.” The coaches listened to the first half of the song contemplatively, up until Kelly turned her chair and brought Madeline over to her team by default.

8:59 p.m. – The next artist, Cami Clune from Buffalo, had her sights set on joining Team Gwen or Team John. She grew up learning dance and performing in theater, but was thrown off those tracks by a connective tissue syndrome that began destroying her joints. At that point she turned to music as a “pain medication” and a way of healing. Tonight she sang Bon Iver‘s “Skinny Love” and within seconds had a chair turn from Kelly, John and then Gwen. Eventually a stubborn Blake turned as well, making Cami the first four chair turn of the night… if it wasn’t for an expert use of the block by Kelly on Blake. Even with the strong push from Kelly, Cami went with her gut and joined Team John.

9:11 p.m. – Coming from a hemp farm in Eugene, 28 year old Parede Valente-Johnson arrived at “The Voice” for the chance to explore one of his other loves, music. His rendition of A. Robert Johnson‘s “Crossroads” was soulful and gritty, but none of the coaches turned their chairs. The panel loved the “growl,” but thought it was a one note performance that would have benefited from taking his voice to different places.

9:20 p.m. – The next artist began singing in the cloak of darkness. His operatic voice sent Kelly into a spiral of anxiety where she struggled to hold out on turning around for him. When she finally did, Ryan Gallagher from Michigan was revealed to her and to Blake who also turned his chair. Kelly immediately challenged Blake by pointing out that he didn’t even know he was singing “The Prayer” by Andrea Bocelli. Blake’s best strategy was to lie to Ryan and say that he’d be the third opera singer on Kelly’s team.

9:31 p.m. – After telling Blake that he was originally his first pick, Ryan decided to join Team Kelly instead. Kelly really begged for that one and it worked out!

9:32 p.m. – Chloe Hogan, expert spider killer, from Florida says she got her musical talent from her grandfather who she actually never heard sing in his life. Though he’s passed, he remains her inspiration as an artist, especially with her audition song “What the World Needs Now Is Love” by Jackie DeShannon. Despite a gorgeously reserved performance, Gwen was the only coach to turn her chair and Kelly thought it was a good match for them both.

9:44 p.m. – Before Kiari Mhoon took the stage, John was hoping to turn his chair and bring another artist to his team. Growing up, Kiari used dance as a way of coping with the stress of his surroundings and then turned to music at the behest of a teacher. After high school he went into the military where he met his husband and now performs at military events. His performance of “Wanted” by Hunter Hayes was not enough to get John to turn or any of the other coaches. Overall the coaches felt like he had three different voices competing for control of the song and that’s why they didn’t turn.

9:53 p.m. – Born in an ultra small town in Virginia, Sid Kingsley was the final audition of the night after traveling 74 hours across the country by train because of his “loathe” for flying.  He played the piano while singing Bob Dylan‘s “Don’t Think Twice, It’s All Right.” Finally, John hit his button and turned, but only moments before Gwen did as well. Blake was the third chair to turn with Kelly holding out completely. John liked that there was “power, soul and clarity” in his voice with an ability to hit high notes. Kelly explained that she didn’t turn because she wanted to hear more vulnerability and ache in his voice, but admitted that she’s probably going to regret not turning for him. Even with his mom advising him to pick Blake, Sid went his own way and joined Team John.

NEXT WEEK: We’re expected to get the “most surprising audition yet.”