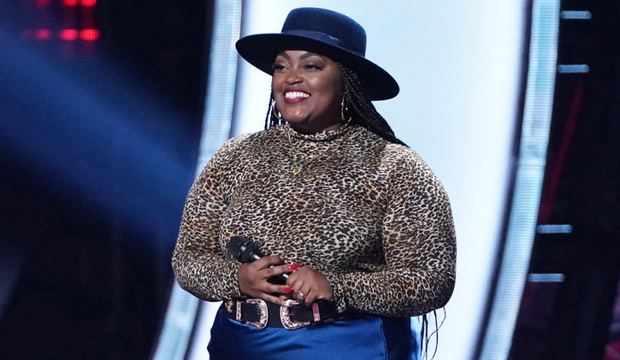 Heading into Tuesday’s episode of “The Voice” Season 19 blind auditions, all eyes were on Desz. In the previous outing, this 30-year-old Houston resident became the season’s latest four-chair turn artist thanks to her powerful rendition of “Un-Break My Heart,” but the episode ended on a cliffhanger before she picked her team. Did Desz become the latest member of Team John Legend, Team Blake Shelton, Team Gwen Stefani or Team Kelly Clarkson? And what other artists wowed the coaches in Tuesday’s hour-long episode?

Below, read our minute-by-minute “The Voice” recap of Season 19, Episode 4 to find out what happened Tuesday, October 27 at 8:00 p.m. ET/PT. Then be sure to sound off in the comments section about your favorite artists on NBC’s long-running reality TV show, which coach you’re rooting for this season and who you think will ultimately join “The Voice” winners list.

8:00 p.m. – “Previously on ‘The Voice’!” In the third episode, seven artists advanced to the next round when the coaches pressed their “I Want You” buttons. Kelly gave her purple jacket to Kelsie Watts, Blake won over Jus Jon and Ben Allen, Gwen turned her chair around for Ryan Berg and Carter Rubin, and John welcomed Rio Souma and Casme. That will make Desz the 25th artist (out of 40 total) to join a team in the Season 19 blind auditions, so let’s get to it!

8:01 p.m. – With four important eyes on her, Desz made the tough decision to let the other three down and join Team Kelly!

8:02 p.m. – The first full performance of the night came from Olivia Reyes, a 19 year old from New Jersey. Prior to her audition, Olivia got some encouragement from her best friend’s dad, season 2 winner Jermaine Paul. Jermaine told her he’s excited for the world to hear her voice. For her first audition ever Olivia sang the Harry Styles song “Falling.” With her mom and grandma looking on by video, Olivia got a chair turn from John and Gwen. John told her that in her high voice her tone is “gorrrgeous” and Gwen advised that she could help teach her out to incorporate her story into her performance so that it’s more than just her voice. Despite heavy encouragement from Blake to choose Gwen, Olivia joined Team John.

8:12 p.m. – Tony Mason‘s claim to fame this season as a 56 year old is that he’s the only grandfather competing. In order to get his second chance as music success he sang “What’s Going On” by Marvin Gaye. Unfortunately none of the coaches turned their chairs for him and so he won’t be a part of this season’s group of artists. Blake wasn’t sure if his “jazzy notes” were something cool or a misstep and John was frustrated that he didn’t “go bigger” when he had the chance to.

8:20 p.m. – We weren’t introduced to Sam Stacy until Kelly, Blake and Gwen turned their chairs for him at the tail end of his performance of “Fire and Rain” by James Taylor. He moved from Nebraska to Hollywood in order to make a full career as a musician doing gigs from place to place. Kelly told him that she’ll push him to use a wider range in his voice and Blake said he can teach him about storytelling in music. John was hesitant and didn’t turn his chair because of some unsteadiness in his voice. In the end, Sam picked Blake as his coach because he liked what he said about remaining true to the song.

8:30 p.m. – Next up was 15 year old Larriah Jackson from Sacramento who has a ton of experience on stage under her belt already. Through her music she was able to get in touch with estranged siblings that found her through a flyer for one of her performances. When she performed Mariah Carey‘s version of “I’ll Be There” for the coaches, Gwen was the only one to turn, lucking in to dream of adding a young female artist to her team.

9:35 p.m. – Following Larriah was Payton Lamar from Nashville. Her audition of “Never Alone” had Blake on the edge of his seat throughout her performance and then at the last second he finally hit his button and got her on his team without having to put up a fight. John sees promise in her voice, but thought the song wasn’t suited for her and she was off in the lower register.

8:42 p.m. – One of ten kids in his family, Van Andrew moved from Texas to Nashville in order to kickstart his career in music. The move was only shortly before the pandemic threw the industry into lockdown and so he’s spent most of the year staying at home and writing music. Tonight he sang “Behind Blue Eyes” by The Who. Throughout the performance Gwen and Blake were trading glances and wound up both hitting their buttons at the same time to compete for him. Gwen said that he heard the unique and dynamic aspects of his voice while Blake said that he sounds like nothing he’s ever heard before, especially since (somehow) he had never even heard the song before. Ultimately Van decided to join Team Gwen.

8:47 p.m. – The next singer was guitarist Tanner Gomes who also lives in Nashville now by way of Arizona. When he was younger his mom became addicted to opioids, forcing him to grow up sooner than he should have had to. Country music was his escape from the stress of his life and he feels like the show is a chance to turn the lives of his family around.

8:54 p.m. – For his audition, Tanner sang Dustin Lynch‘s “Cowboys and Angels.” Kelly was the first chair to turn with a huge grin on her face that continued once it was clear that Blake was the only coach to not turn his chair. Blake said that he already has a lot of country artists on his team and he thinks that he belongs on a team where he’ll be the only country artist. In that regard he lobbied for him to join Team John or Team Gwen. After strong pitches from both Gwen and Kelly, Tanner chose to join Team Kelly.