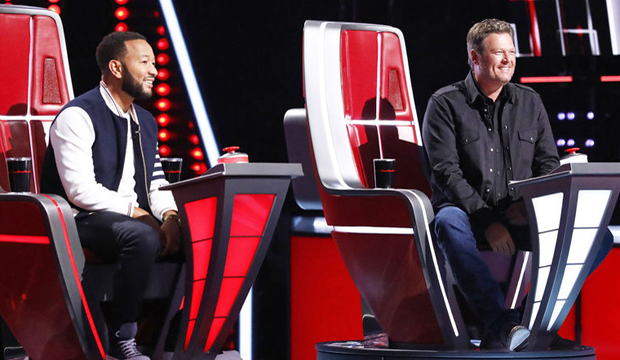 Monday’s blind auditions episode of “The Voice” Season 19 began with a whopping 31 of the Top 40 artists having already found homes on one of the four teams. Three of the coaches (Blake Shelton, Gwen Stefani and Kelly Clarkson) had acquired eight contestants apiece, while the fourth (John Legend) was right behind with seven members. Only a trio of artists had wowed the panel enough to become four-chair turns, with Tamara Jade and Cami Clune joining Team Legend and Desz picking Team Kelly. With the blind auditions now complete, did tonight’s two-hour episode feature anymore four-chair moments?

Below, read our minute-by-minute “The Voice” recap of Season 19, Episode 5 to find out what happened Monday, November 2 at 8:00 p.m. ET/PT. Then be sure to sound off in the comments section about your favorite artists on NBC’s long-running reality TV show, which coach you’re rooting for this season and who you think will ultimately join “The Voice” winners list.

8:00 p.m. – “Previously on ‘The Voice’!” In the fourth episode, six more artists advanced to the battles when the coaches pressed their “I Want You” buttons. Kelly gave her purple jacket to Tanner Gomes, Blake turned his chair around for Sam Stacy and Payton Lamar, Gwen shot her celebratory T-shirt gun at Larriah Jackson and Van Andrew, and John shook virtual hands with Olivia Reyes. Did any of them strike you as having what it takes the claim the “Voice” trophy at season’s end? But enough about last week — let’s get started with tonight’s episode!

8:01 p.m. – The night kicked off with Julia Cooper, a singer songwriting Ohioan that has been exploring her musical side since the age of 5. For her audition she took on “Alaska” by Maggie Rogers and got three quick turns from John, Gwen and Kelly. For whatever reason, Blake held out despite both Kelly and John exclaiming “wow” and dancing throughout Julia’s performance. Kelly and John fought hard to get Julia on their team while Gwen sat back until she could give her own pitch about Julia’s unique quality. Ultimately, Julia went with John, leaving him with only two spots left to fill.

8:11 p.m. – Next up was Apropos, an artist that feels he can appeal to many different genres including hip hop, soul and country. In order to “hit the coaches” with his energy and power, Apropos chose “I Heard It Through the Grapevine” as his audition song. Unfortunately none of the coaches were moved to hit their buttons. John told him he’s a good singer, but that his choices in melody were too narrow to show what his voice can do. Kelly said she was close to hitting her button, but he was too “linear” and needed to show range.

8:22 p.m. – Standing 6’7″ tall, John Sullivan came to the stage ready to get the attention of a coach with his rendition of “Operator” by Jim Croce. Looking for a singer songwriter type for his team, Blake was the first to turn his chair, but was quickly challenged by Gwen. Blake told him he sounds like a “perfect storyteller” with great pitch and Gwen said that his voice put her at peace. In the end, tall went with tall and John chose to be Blake’s penultimate artist.

8:33 p.m. – For Skylar Alyvia Mayton the dream was not only to be on the show, but to be picked by Kelly. Luckily her reworking of The Weeknd‘s “Blinding Lights” was right up Kelly’s alley and so that dream was quickly realized. None of the other coaches turned, so Skylar became an automatic pickup for Kelly. As Blake smartly reminded us, Kelly won two of her seasons with young artists like Skylar so this is definitely a pairing to watch.

8:36 p.m. – The next artist was hidden from us, too, until John and Gwen hit their buttons for him in the first few bars of his performance of Lewis Capaldi‘s “Someone You Loved.” By the end of the song they remained the only coaches with their foot forward for Lain Roy. Eventually Lain revealed that he didn’t realize he wanted to be a singer until he performed John’s song “All of Me” in the high school talent competition and won. But despite that, and maybe because Blake had some influence, Lain chose to join a shocked Gwen’s team.

8:48 p.m. – Hawaiian resident Jared Ming doesn’t have a ton of opportunity singing country music in the islands. His take on “Drunk Me” wasn’t to the taste of any of the coaches though. Gwen liked his range, but found pitchiness in his delivery. John thought his tone was very commercial, but Blake thought his voice lends himself toward something more old fashioned than contemporary country music.

8:59 p.m. – Trio Worth the Wait is made up of two sisters and their mom who gained bookings after a video of them singing to a store clerk went viral. Gwen was the first coach to turn around for their harmonizing of “When Will I Be Loved,” but the other three quickly joined, making them the season’s next four chair turn. Blake was under attack from the other coaches for already having too many country artists on his team. Kelly promised to push them “like a choir director” if they joined her team, but John made the point that he’s worked as a choir director in the past and knows how to work with groups. In the end, the family group went with the country guru as Blake’s final artist.

9:11 p.m. – Emmalee has always known that she wants to be a singer, using golf clubs as microphones and working with other song writers in her 20 years of life so far. Tonight she sang a stripped down version of Whitney Houston‘s “How Will I Know” in order to show her power and range. John and Kelly hit their buttons after just five words of the song. But even with their confidence, Gwen couldn’t be swayed to turn her chair as well. John said that he turned quickly because he could hear her tone and it made him want to work with her. Emmalee went with her gut and joined Team Kelly as her final artist.

9:22 p.m. – Professional clogger Bailey Rae started singing from a young age through church and with the urging of her parents. Kelly was frustrated to hear her voice on “Does My Ring Burn Your Finger” because it’s an artist she would have wanted for her own team. But her loss was John’s gain because he finally got the country artist he was looking for without having to make a pitch.

9:35 p.m. – Neci, a nurse from Nashville, has had a rough pandemic, needless to say. Her trip to the show is an opportunity to improve her family’s life while also doing something for herself for once. Her rendition of “God Bless the Child” was not enough to earn her a spot on a team this late in the game though. John called her a gifted vocalist, but said he was looking for more “discipline and control.”

9:43 p.m. – Raised on country music, Tori Miller believes that the power in her talent comes from channeling raw emotion, like the loss of her father. In that regard, “When You Say Nothing At All” was the perfect song choice for her and a song that impressed Gwen to give her the final spot on her team.

9:54 p.m. – With time winding down, we knew that James Pyle was bound to be chosen to join Team John. Both Kelly and Gwen were very into his rendition of the Harry Styles song “Watermelon Sugar,” and it didn’t take long for John to hit his button, making it official. Gwen called him one of the best singers that they heard all season and she committed to wanting to steal him if he becomes available in a future round.

NEXT WEEK: The battles begin with the coaches pairing one of their artists against another, and the first opportunity for steals and saves to be used on unchosen artists.